A visit with Justin FitzPatrick

Three months ago I had a love of men's shoes, a one-time reader's familiarity with the Vass book, and an assignment to learn everything I could about English shoemaking in the two days I would spend in Northampton. In the online shoe research I did in the subsequent weeks, the most informative site I found was Justin FitzPatrick's Shoe Snob blog. Fitting, then, that I began my tour through England by meeting Justin.

Five years ago, Justin was in a similar position as I was when I set out: he loved men's shoes (I think even more than I do), and wanted to know more. “When I started, there just weren't very many resources on the Internet to learn about quality men's footwear,” he told me. Justin was selling shoes at Nordstrom when he met someone whose father was a friend of the late famed Florentine shoemaker Stefano Bremer. Justin liquidated his entire life in the US and turned that small connection into a spot in Stefano's workshop.

A year later, Justin had exhausted his finances and his Italian visa. He spent another year working back at Nordstrom for a few months at a time, saving up enough money to return to Italy and visit his then girlfriend, now wife. Justin was restless. “I hate feeling like I'm not moving forward,” he said. So he married his Italian girlfriend, which allowed him to move to London, where he set up a shoe shine stand at Gieves and Hawkes. He also started the Shoe Snob blog to share his knowledge of the industry and gather a following, so that when he had something to sell, he'd have some potential customers.

Now he has his product: J. Fitzpatrick Footwear, which are sold both at Gieves and Hawkes and online (currently you can buy using PayPal by emailing Justin as indicated on the linked page; within the next few months there will be a proper e-commerce site). The line uses two lasts, both bespoke lasts made for Justin's foot – one (JKF) that he made for himself while at Stefano Bremer's workshop, and another (TMG), less pointed in the toe, that Justin's friend Tony Gaziano of Gaziano and Girling made for him.

The lasts, since they come from bespoke lasts, are more closely shaped than typical RTW lasts, giving the shoe a nice profile. For instance, note how Justin's wholecut closes just right over my foot – many oxfords that I try will have too much room above my foot, so that they need additional padding under the tongue in order to close without crumpling against each other.

Both last have rounded toes. “I like soft curves,” Justin told me – and you can see it in his designs as well. On the Phinney wingtip, for instance, the lines of the toe design fold in gently towards the lacing rather than a sharp and deep point as you might see on other models. A lot of the designs I'd describe as whimsical and playful, with enough self-awareness to not veer into fancy-dress Tumblrism. For instance, the Wedgwood balmoral boot with a denim shaft, the bouncing-ball motif on the Tony wholecut, or the suggestively low-cut loafers (more on those later).

“When I first started researching factories,” he said, “somebody gave me some great advice: Don't use an English factory. They'll be too expensive for you, and they won't make what you want. So I went to Spain.” At just over £300, the shoes are cheaper than most of what you can buy from Northampton. They also adopt the Mediterranean softness of construction – they are Goodyear welted, but don't have that heavy, stiff feeling that often comes with a Goodyear welted shoe. The use of French calf gives the uppers a softer feel as well. They have closed-channeled soles and beveled waists, features that are rare to find on a shoe at this price range.

There is of course no comparison with, for instance, a Gaziano and Girling shoe. At that level, the beveling of the waist is much nicer, the sole trimming much finer, the lasting better, along with many other construction details. Justin told me that what he struggles with most is getting consistency out of the factory, as he holds shoes to a high standard and notices every defect.

As a parting gift, Justin graciously offered me a pair of the burgundy loafers (the model is the Laurelhurst). Among the many compliments I've gotten on them, in the one day I wore these in Northampton, the guides at both shoe factories I visited asked me if they were G&G (the fact that I told them I had just visited G&G the day before might have nudged them). They are a striking color and finish. It's not a flat burgundy – not “plasticky” as many burgundy leathers seem. It's got a lot of black in it to give life. I also like the low cut, and I'm a sucker for a floating medallion. These features together make for a unique shoe with a lot of character.

The suede used inside the heel to prevent slippage is a bit rougher than the suede usually used on slip-ons, so around the third day of wearing or so my heel started to get irritated. I wore them again today with no issues, so I think it was simply due to having worn them three days in a row out of the box, and the extra roughness seems more successful in preventing heel slippage. There is also some evidence of the struggles to get a consistent product that Justin mentioned – there's a bit of edge dressing gone astray that I probably wouldn't have noticed had Justin not pointed out to me when he gave them to me, the stitching on one of the heel counters isn't straight, and the extra piece of leather on the heel has wrinkled a bit. These quibbles aside, I like the design and color of the shoes enough that should they somehow die in a grease fire tonight, I'd buy a replacement pair tomorrow.

Justin's most important project of 2013 however, is his newborn son, born this past Monday. I'm glad that he will grow up in a world where quality information on shoemaking, as well as quality shoes, aren't so difficult to acquire as they were when Justin made his first voyage to Italy. A pair of Tonys on my feet - the lacing comes together naturally and easily. Justin and his shoes. 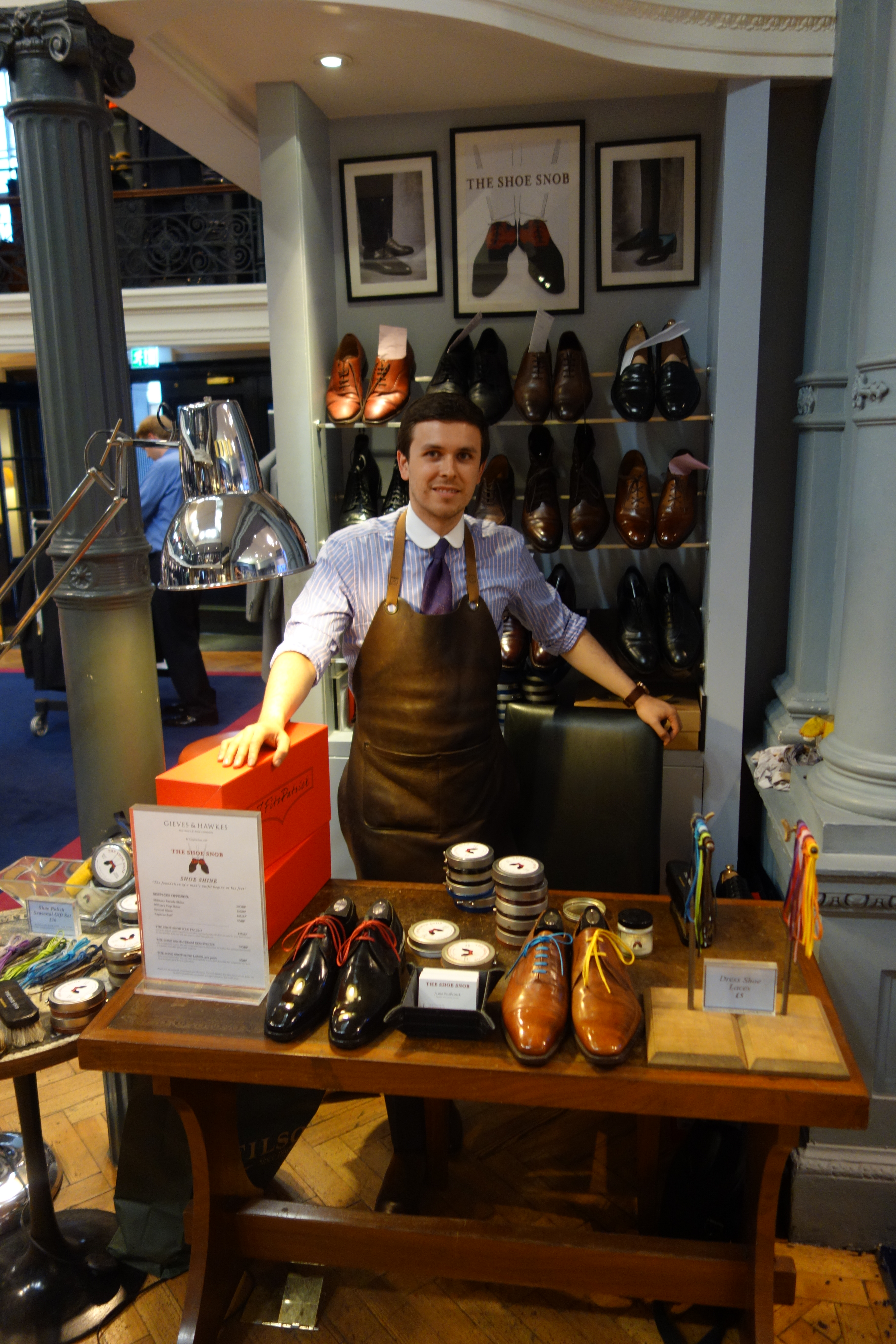 Justin and his stand.
http://ivorytowerstyle.com/ Some Ties and Pocket Squares for Sale Attolini Suit and SC for Sale

Justin seems like a great guy and he runs a fantastic blog. I wish him the best in the future. Looks like he has some tremendous offerings.
“I have always lived violently, drunk hugely, eaten too much or not at all, slept around the clock or missed two nights of sleeping, worked too hard and too long in glory, or slobbed for a time in utter laziness. I’ve lifted, pulled, chopped, climbed, made love with joy and taken my hangovers as a consequence, not as a punishment.”

Damn. I saw him while I was in London at his shoe station a few months ago. I wish I had known about Justin's story beforehand. I certainly would have said hello and talked shoes and the states for a bit. Good stuff, Unbrelgrazzo.

Nice post, Un Bellissimo Regazzo. Hope things are well for you in NoVa.
A thread on the finest mens shops in the world. Please consider adding your hometown favorite to it!
http://www.styleforum.net/t/358220/classic-mens-shops-a-list/0_100

These are very nice. I'll be interested to see how they wear over time.
See my eBay listings! Discounts for SF members, PM me and we can work out a deal.
Also check out the Thrift buy, sell, and trade thread.

I can concur, Justin is a great guy (very helpful), and his shoes are great for their price. Unfortunately, his captoes didn't quite fit me right, but I'll certainly go back to try the loafers.

Thanks for the review. Justin seems like a great guy. I'm rooting for him to continue to do well.
Introducing my menswear brand: Ikiré Jones.​

Great review, Justin is a great guy who has answer my questions before, and his blog is top notch.
https://www.instagram.com/wurger49/

Thanks, gents. I really enjoyed meeting with Justin. He's a great guy to talk to - very honest and open about everything, and has a great eye for shoes. For J FitzPatrick admirers, don't forget there's the appreciation thread as well:

http://www.styleforum.net/t/344162/j-fitzpatrick-appreciation-thread
http://ivorytowerstyle.com/ Some Ties and Pocket Squares for Sale Attolini Suit and SC for Sale

When did he start the stand in Gives and Hawks, I think I saw then as early as late 2010? Great story, wish him the best.

by the way, is it usual for bespoke client to actually walk away with the last? Or Justin built his model from lasted shoe tree instead

Not common at all for a normal bespoke client. This was a result of Justin knowing Tony personally - I'm sure Justin wouldn't use the last without Tony's approval
http://ivorytowerstyle.com/ Some Ties and Pocket Squares for Sale Attolini Suit and SC for Sale

Nice looking loafers, if that's what you're into.