suitforcourt said:
Submissions have to be made by December 1.

Restoration means whatever you want to do with the shoes. It's wide open.

I hereby submit these Foot Joy 70706 shortwing oxfords for the 2020 Styelforum shoe revival challenge. Below is an account of the revival process with photo documentation. 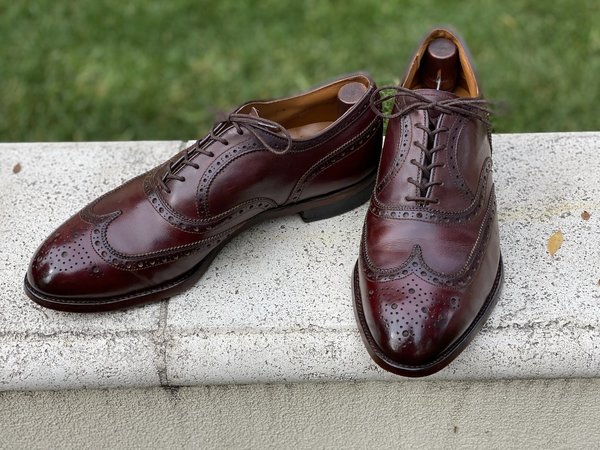 Summary:
When I took possession of the shoes, they had a bad toe curl, dried and dirty uppers, and bad gouges on the toes. I fixed those issues plus dyed the uppers. I also applied wax polish.

Purchase:
I bought the shoes in August of 2020 for $30 from a Florida-based seller on Mercari. Here is the receipt.

Before revival shoe condition and appearance:
Here are photos (with day and time stamps) I took upon taking possession of the shoes as well as listing photos showing the condition before I revived them. Note the Sever gouges on the toes and the toe curl. 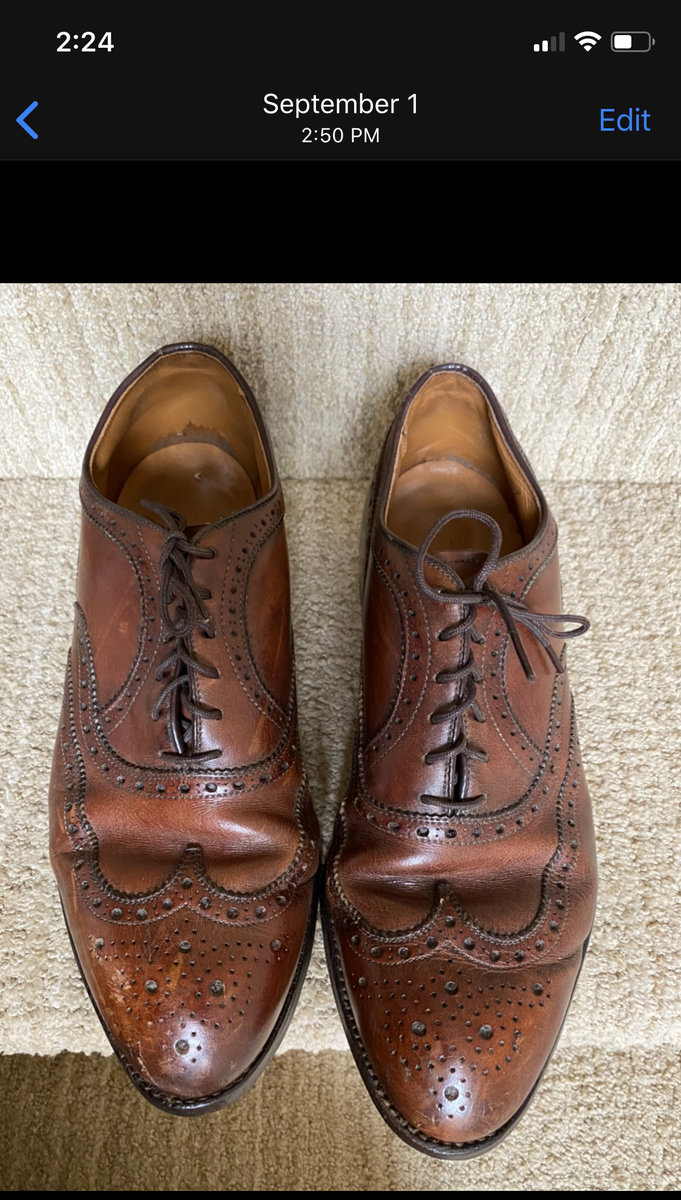 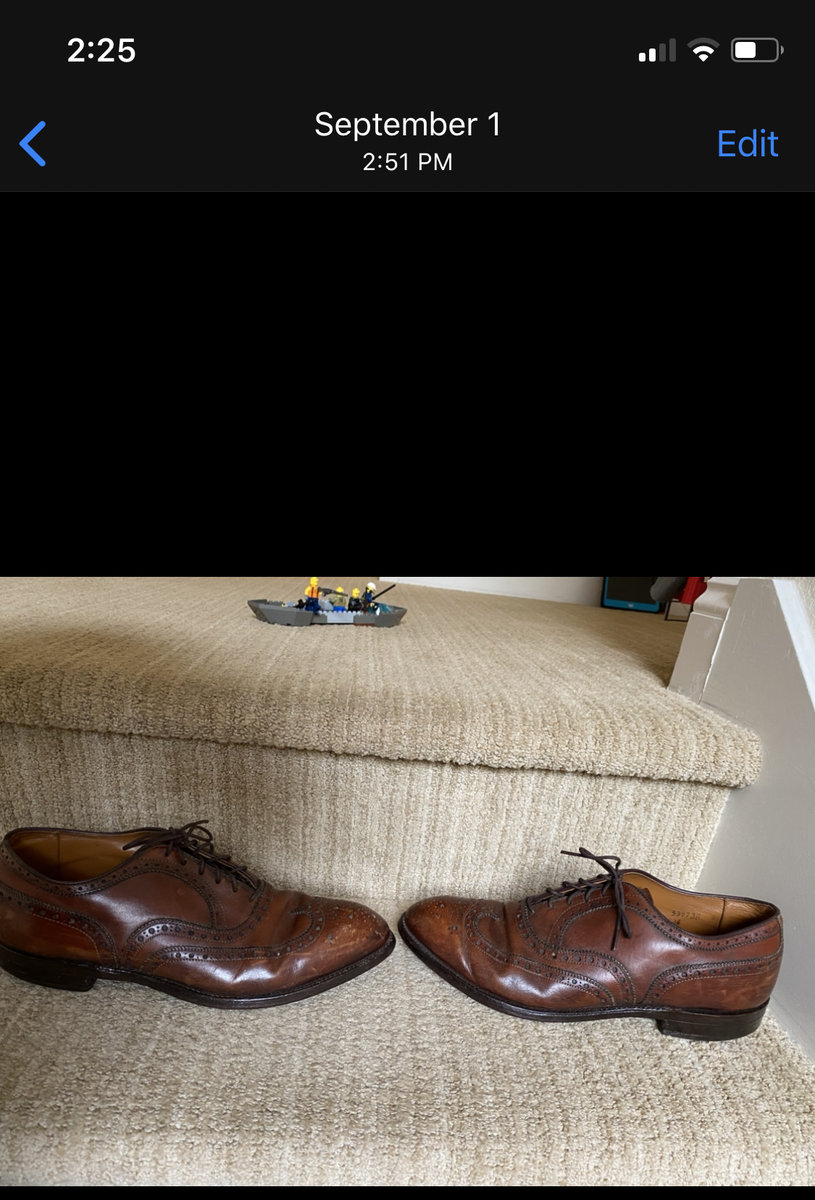 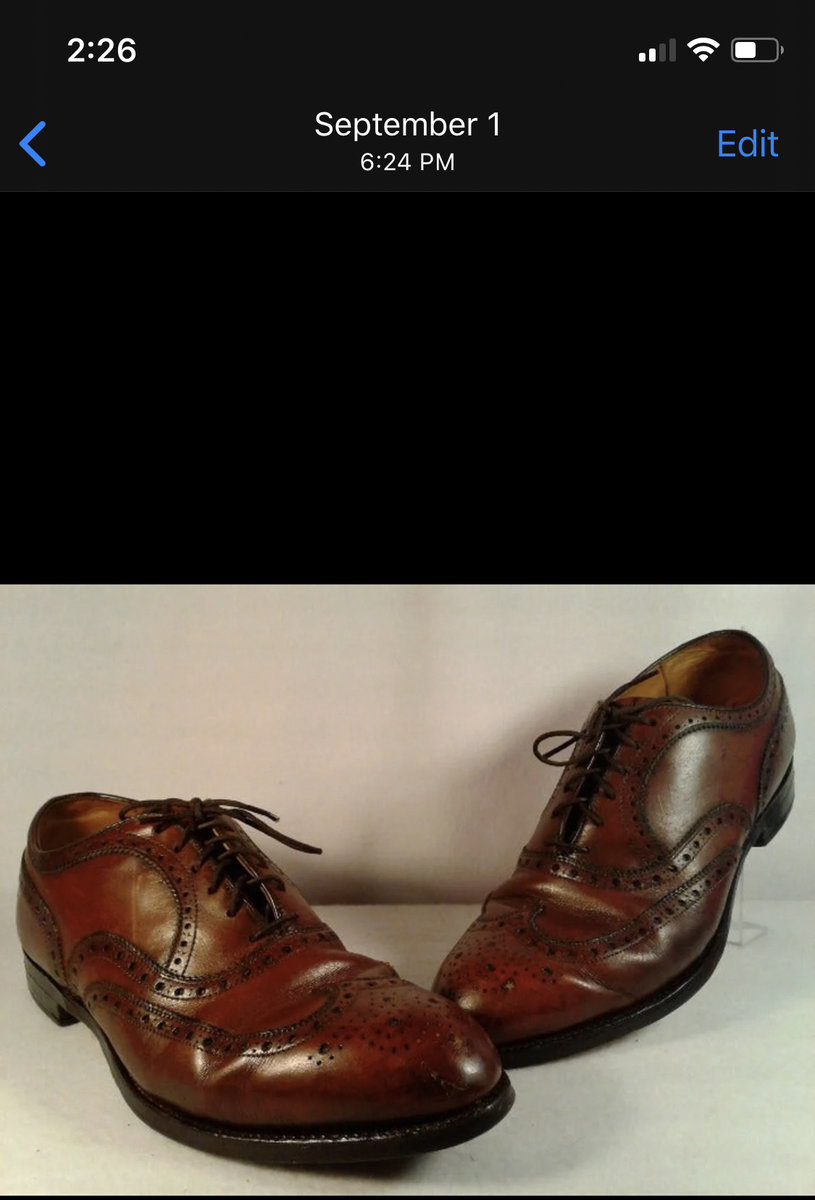 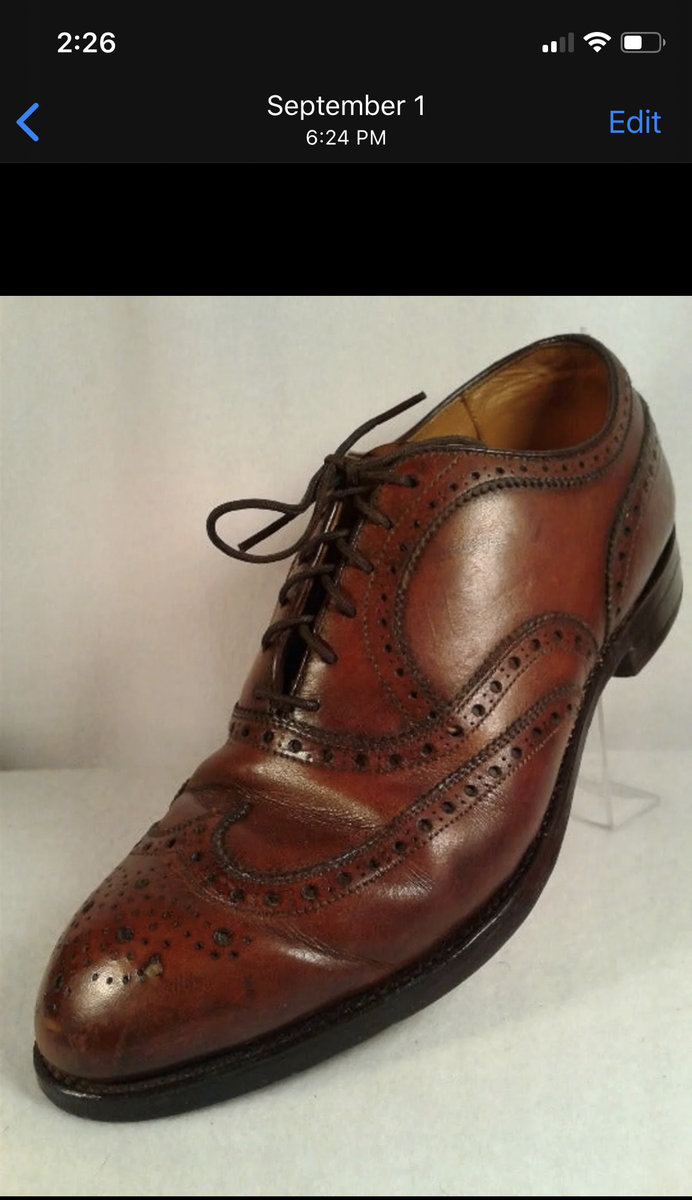 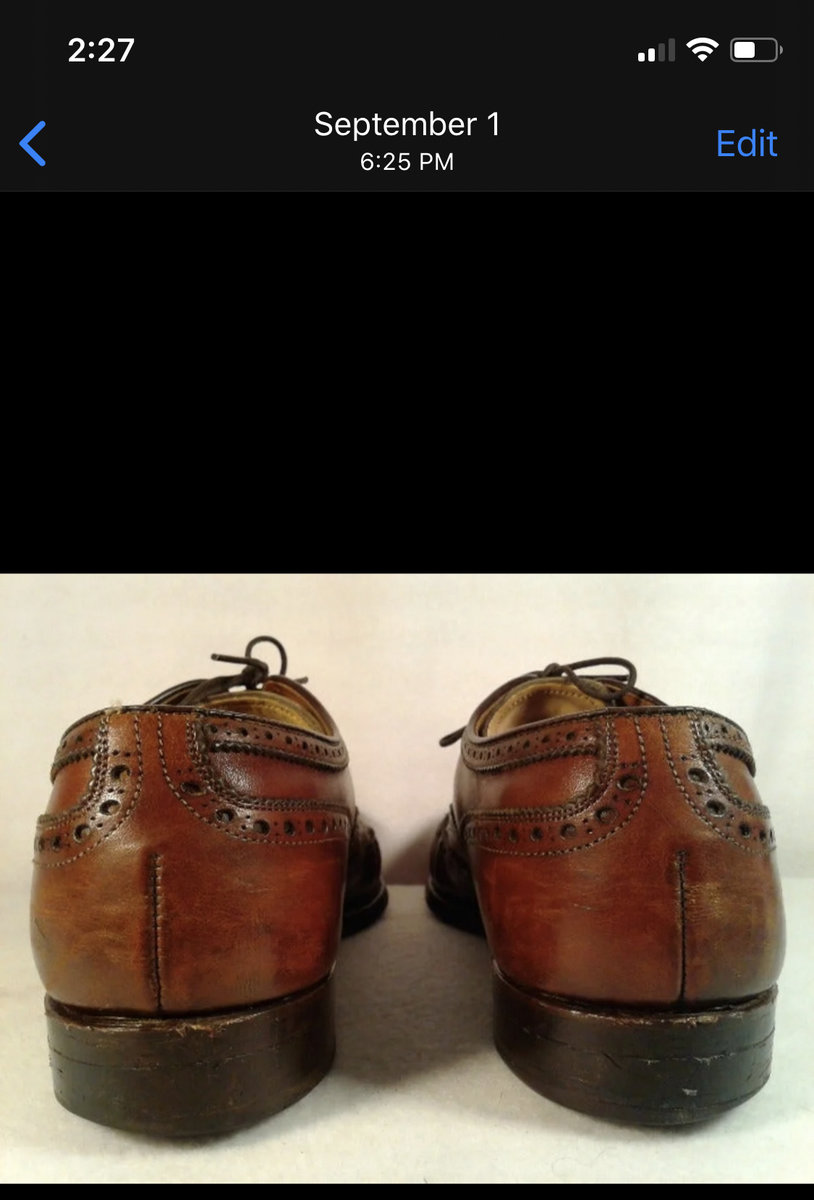 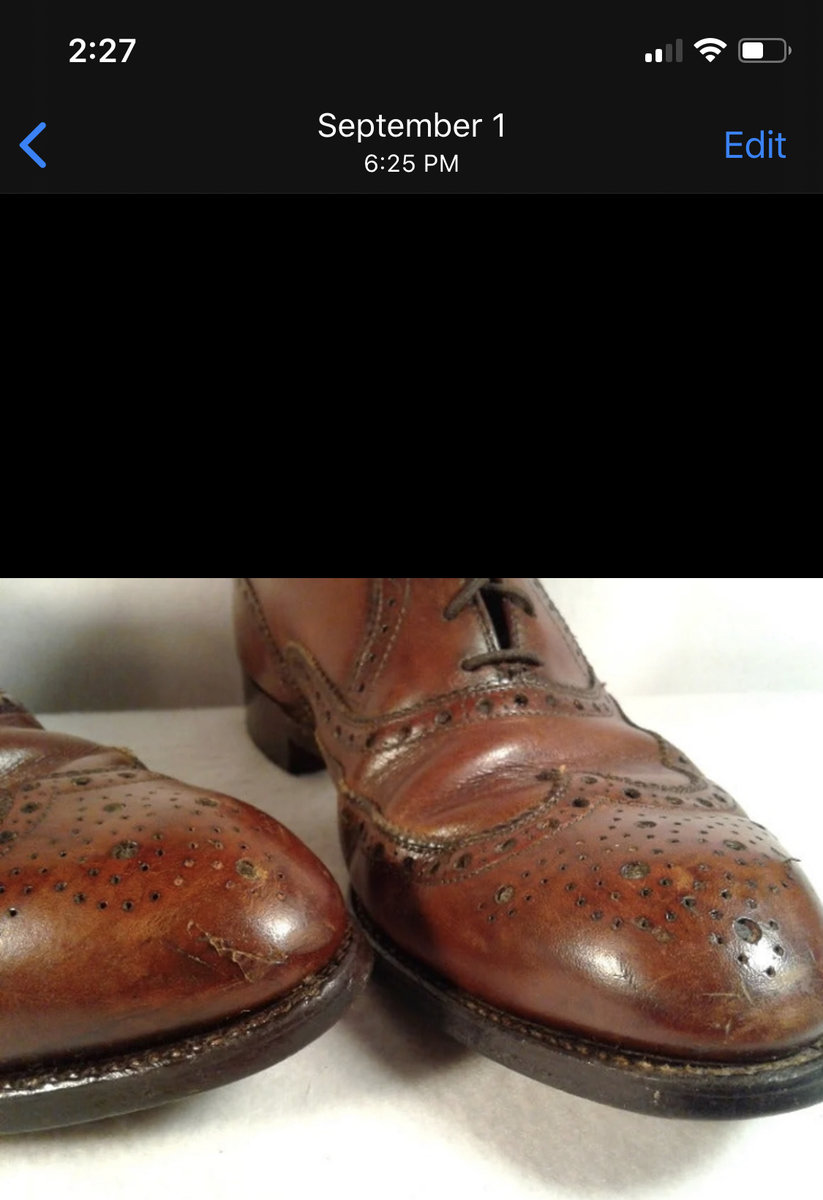 The Process:
Fixing the uppers:
I began by inserting a solid pair of shoe trees. I then cleaned the uppers with Fiebling saddle soap. I used a spray bottle with water to thoroughly rinse the saddle soap off the uppers. The uppers and soles were saturated. When the leather dried around the shoe trees the toe curl was gone. The cleaning further revealed the extent of damage to the uppers, including the dryness of the leather. 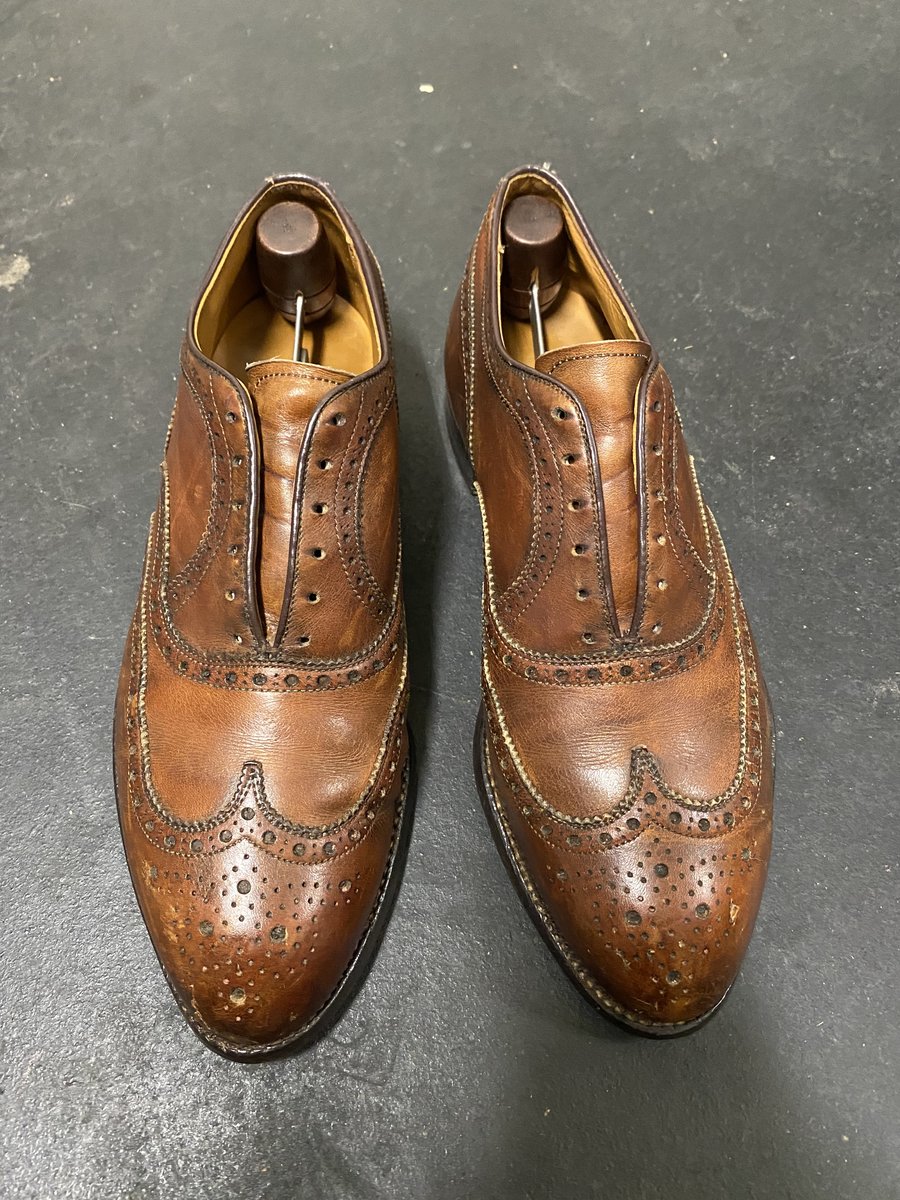 I then stripped the uppers with Walgreens 100% acetone. I spent three evenings over the course of a week stripping the old wax and color. 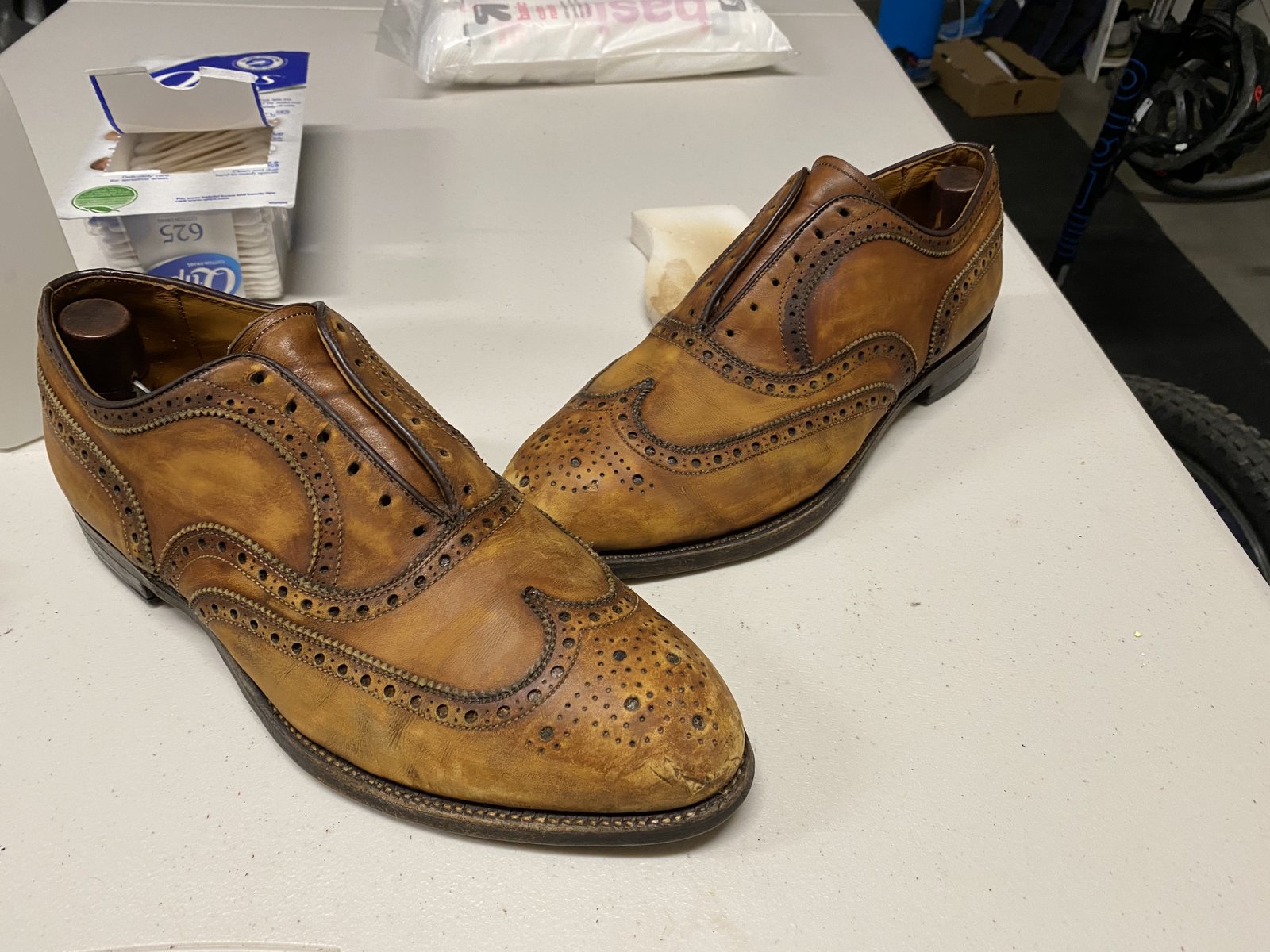 I used a small screwdriver to clean the gunk out of the broguing. The gouges on the toes presented a challenge since they were so severe. I conferred with Alberto Suastez from the Facebook group about how to deal with the toes (I also received advice on dye color and technique. @suitforcourt confirmed that receiving advice was not a violation of the Shoe Revival rules). He advised against using Saphir renovating cream and instead to use Star Bond gap filler. I followed his advice, applying the gap filler to the gouged areas. 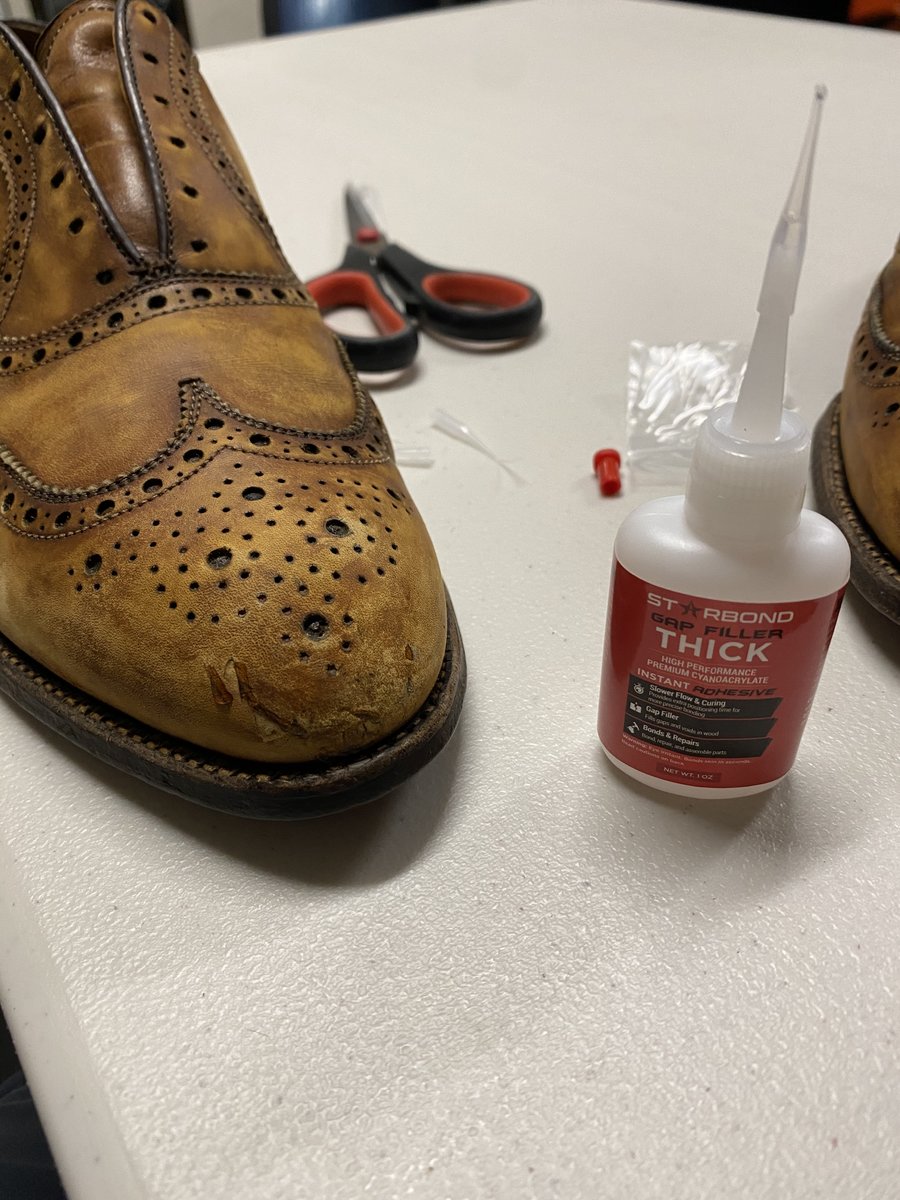 I then sanded the toes to smooth out the filled gouges. The gouges were still visible, but the area was completely smooth. I finished prepping the uppers by lightly sanding the uppers with high-grit sand paper. The shoes were ready to be dyed.

Dying:
I dyed the shoes with Fiebings mahogany leather dye and a medium makeup brush. Fiebings mahogany has reds, browns, and yellows. It's a perfect color for fall. I wanted to achieve a mostly even dye with some subtle marbling and burnishing on the toes and brogue. After applying a light coat of dye with a medium makeup brush, the uppers were splotchier than I wanted. So, I progressively blotted dye on the lighter areas. I made sure that the medium makeup brush had very little dye on it as I blotted. I did several rounds of blotting until the color was even, with some of the marbling I hoped to achieve. I used a small makeup brush to apply more dye to the toes and brogue to achieve a burnishing effect. I could not totally dye the areas I filled with the gap filler. They took some dye but remained slightly lighter than the rest of the toe. It is only noticeable up close. 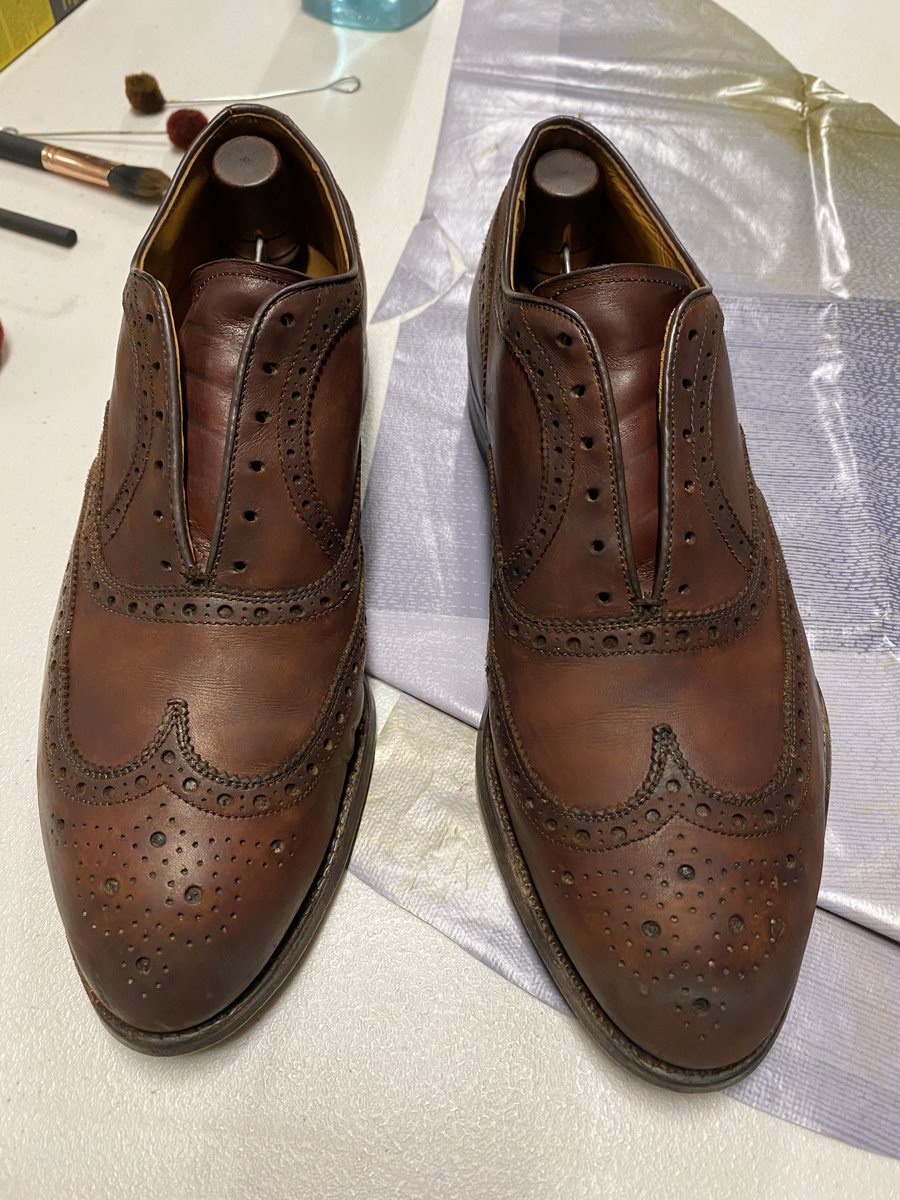 Conditioning & Polishing:
I applied two coats of Bick 4 to hydrate the leather, which was very dry after years of neglect, the acetone stripping, and dying. I also applied a round of Saphir renovatuer. After hydrating the shoes, the dye color was richer and more uniform. The subtle marbling remained. 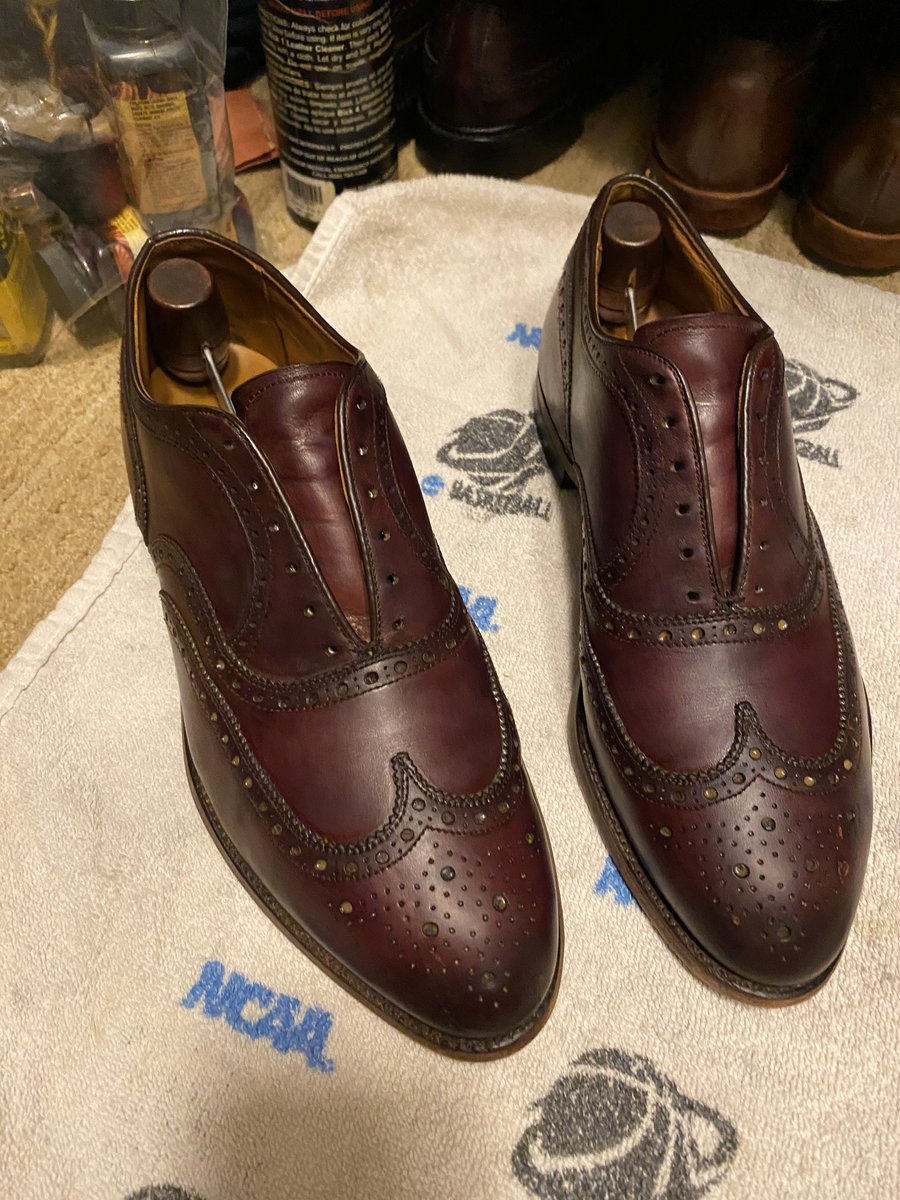 Finishing & Final Results:
I finished by applying a round of Colonil 1909, a round of Saphir wax polish, and Pure Polish high shine wax to the toes and heels. I did a "dry" polish on the toes and heels, using only my fingers. I learned this technique from a video @DapperAndy, owner of Pure Polish, posted on YouTube. I also put a light coat of Fiebings mahogany dye on the edges. I cleaned the original laces with a wet rag and castile soap. Here are the final results: 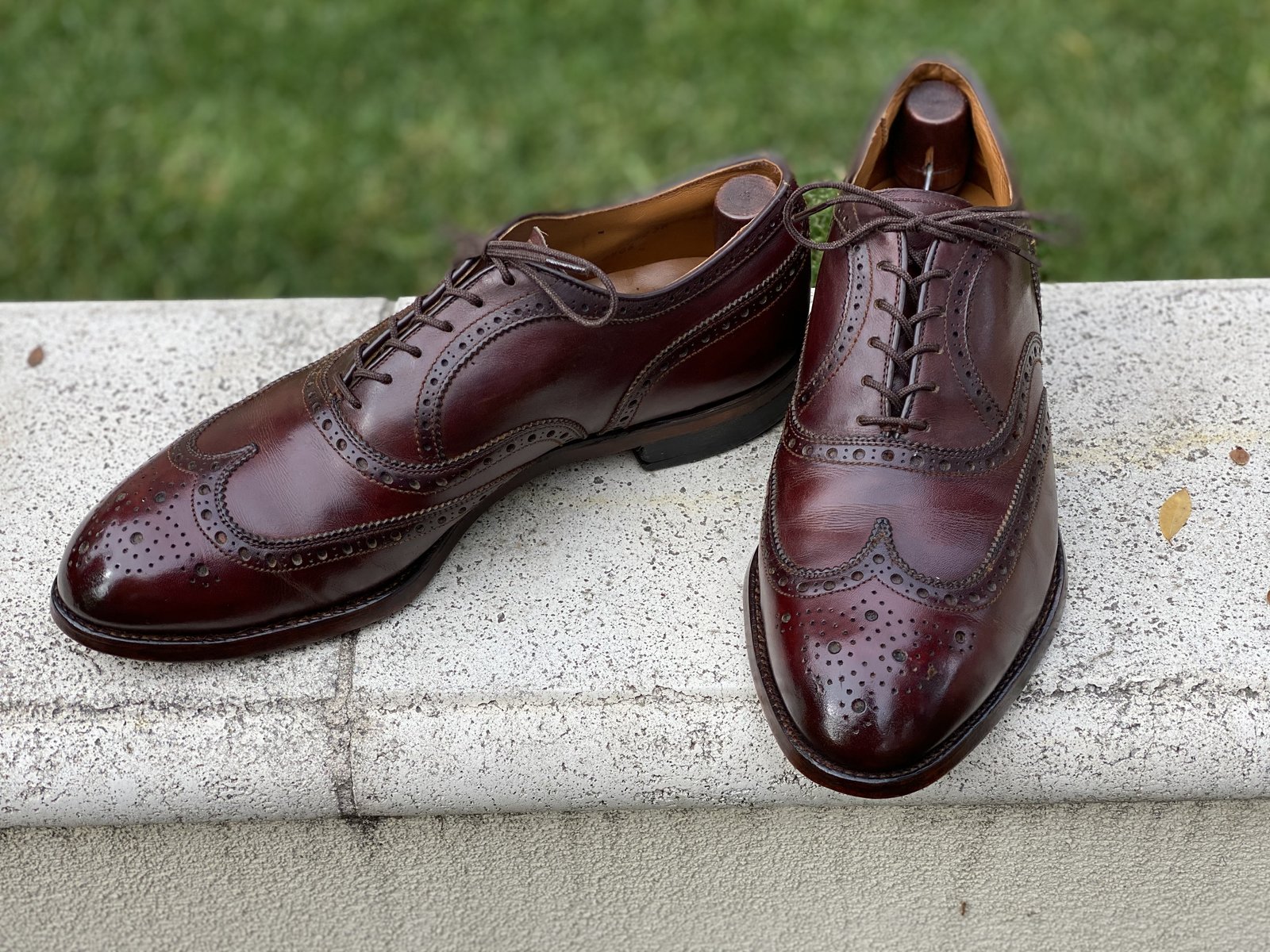 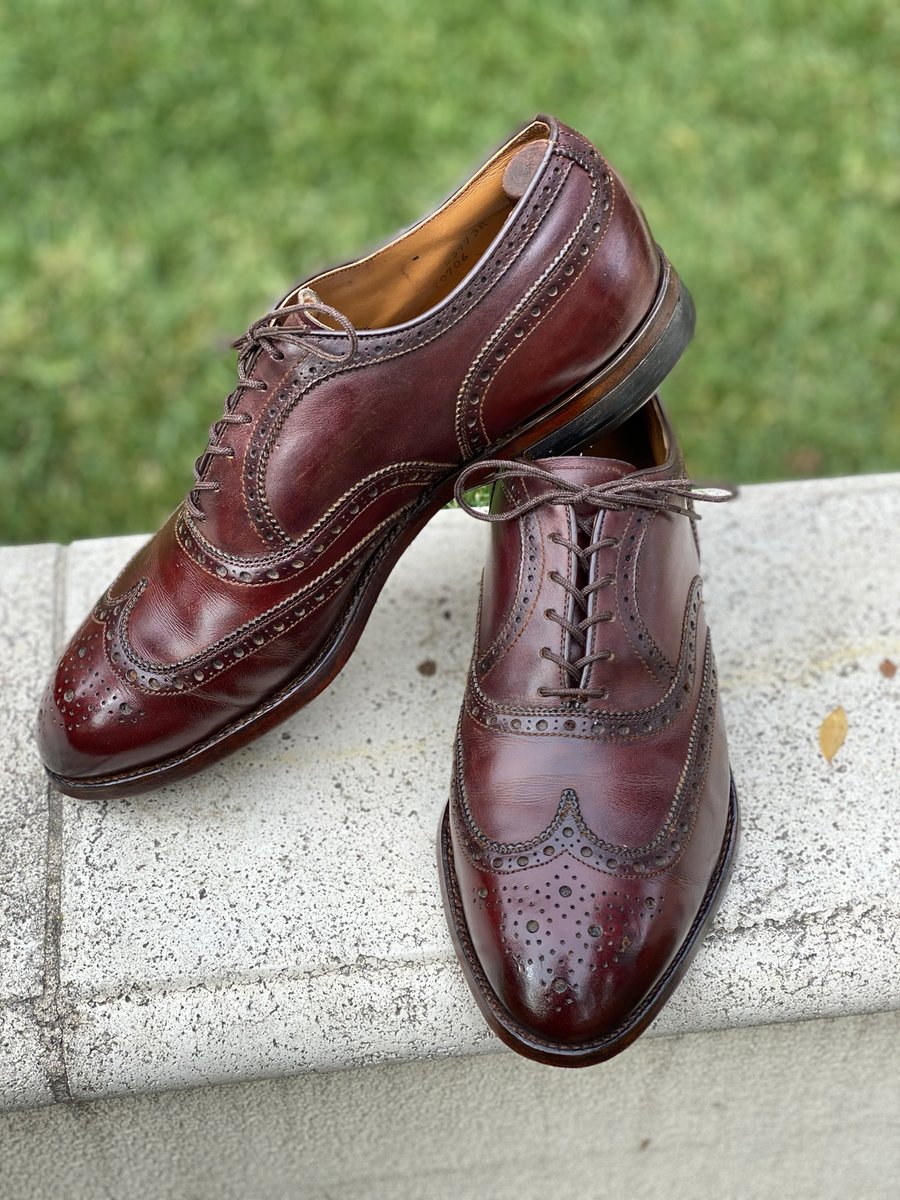 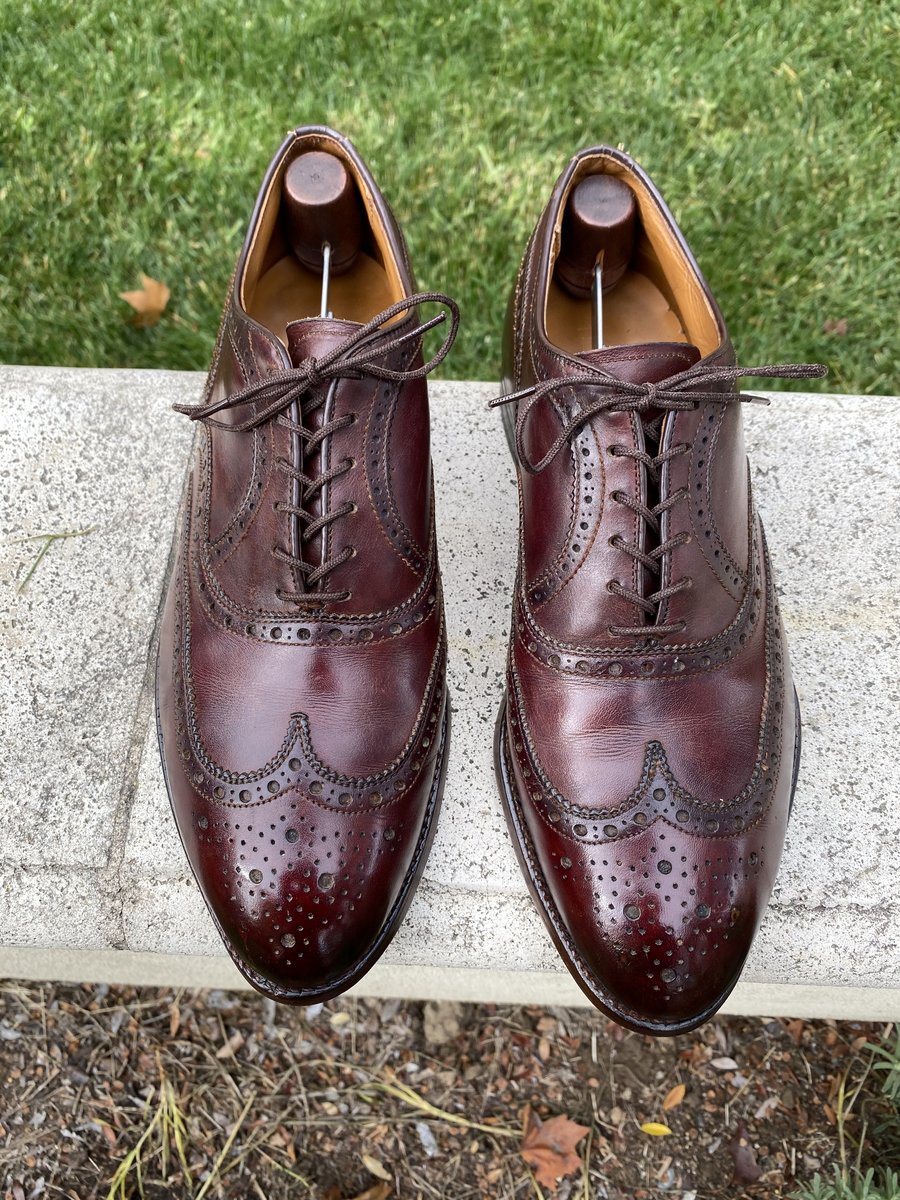 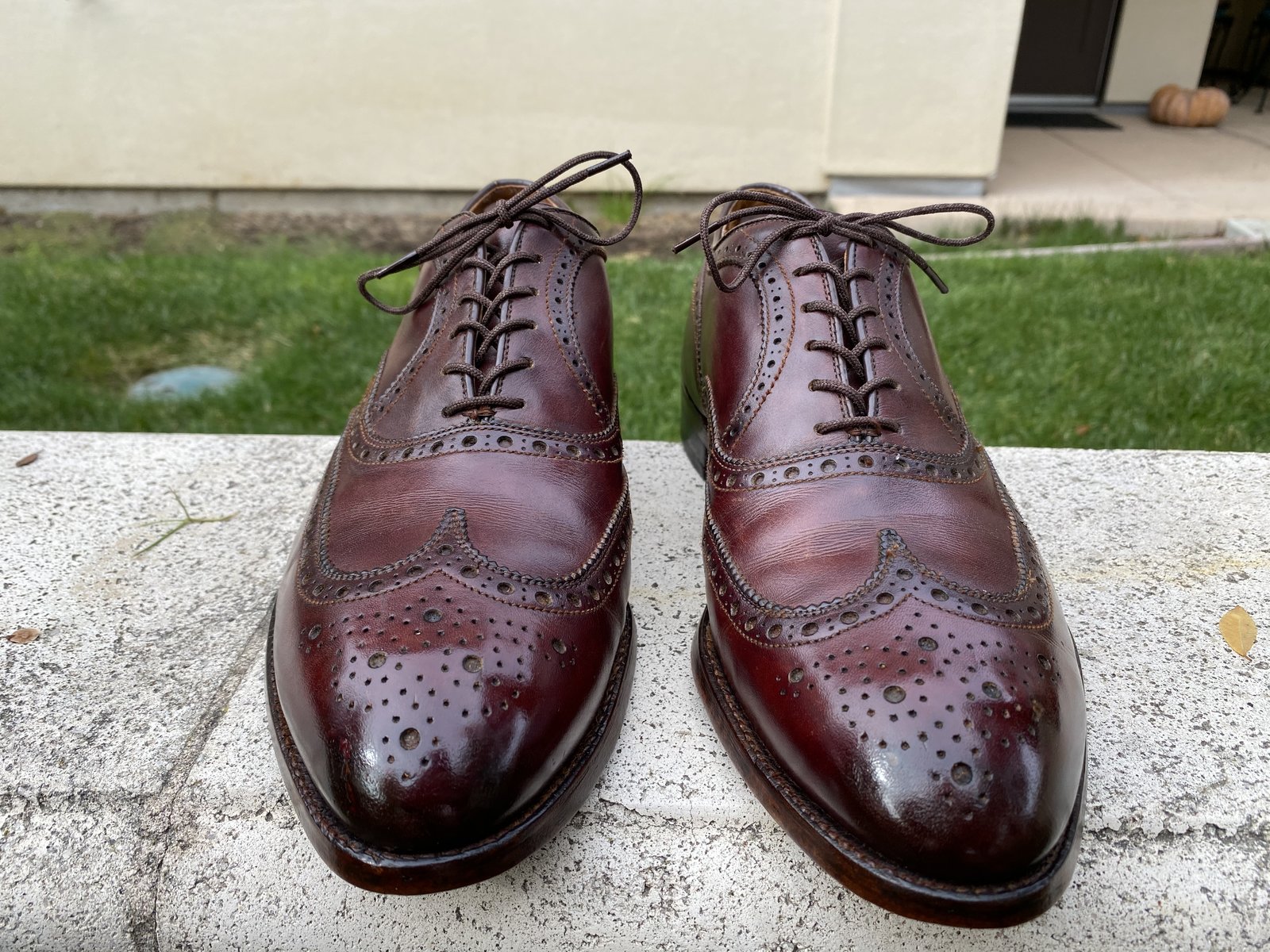 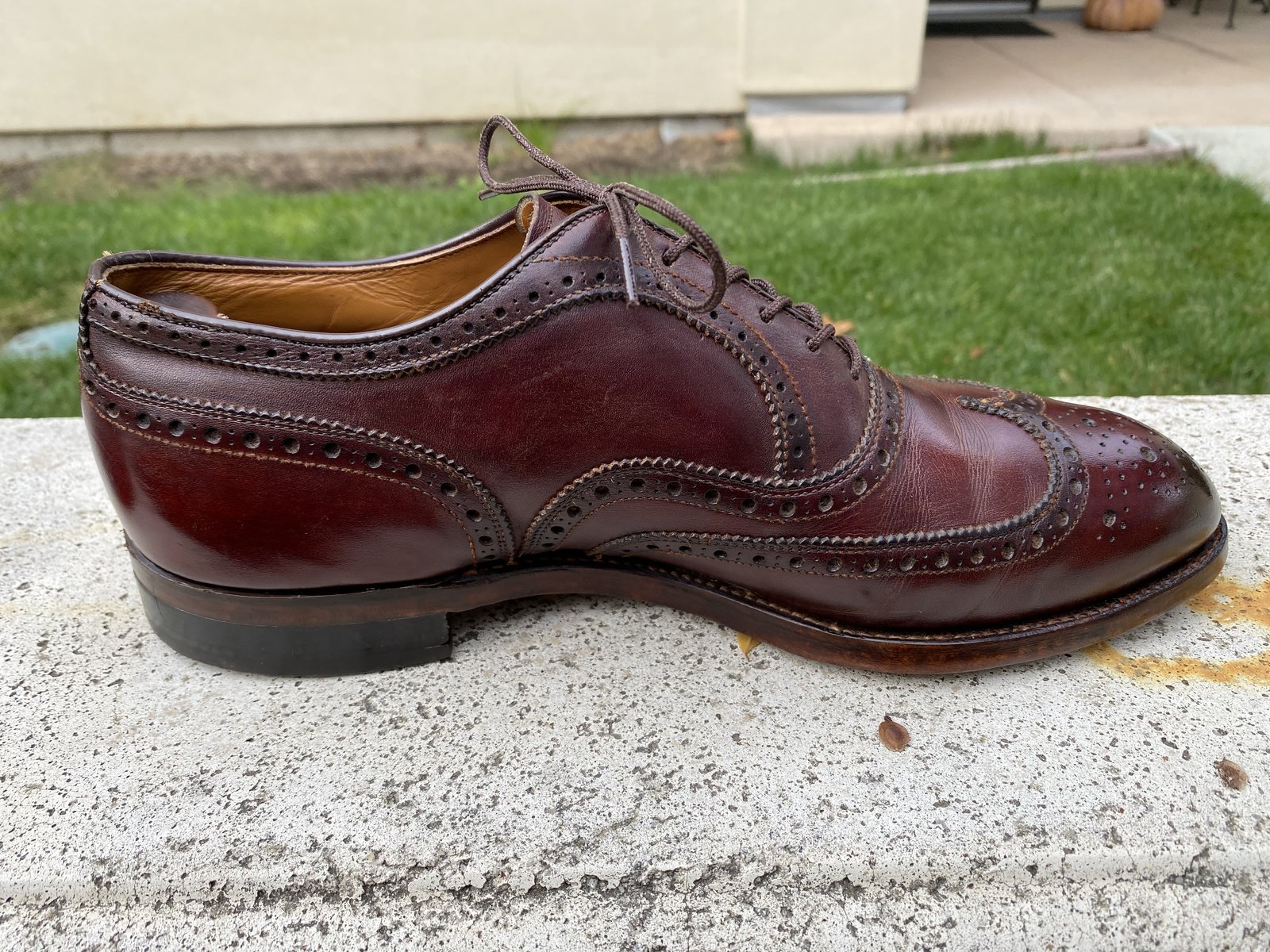 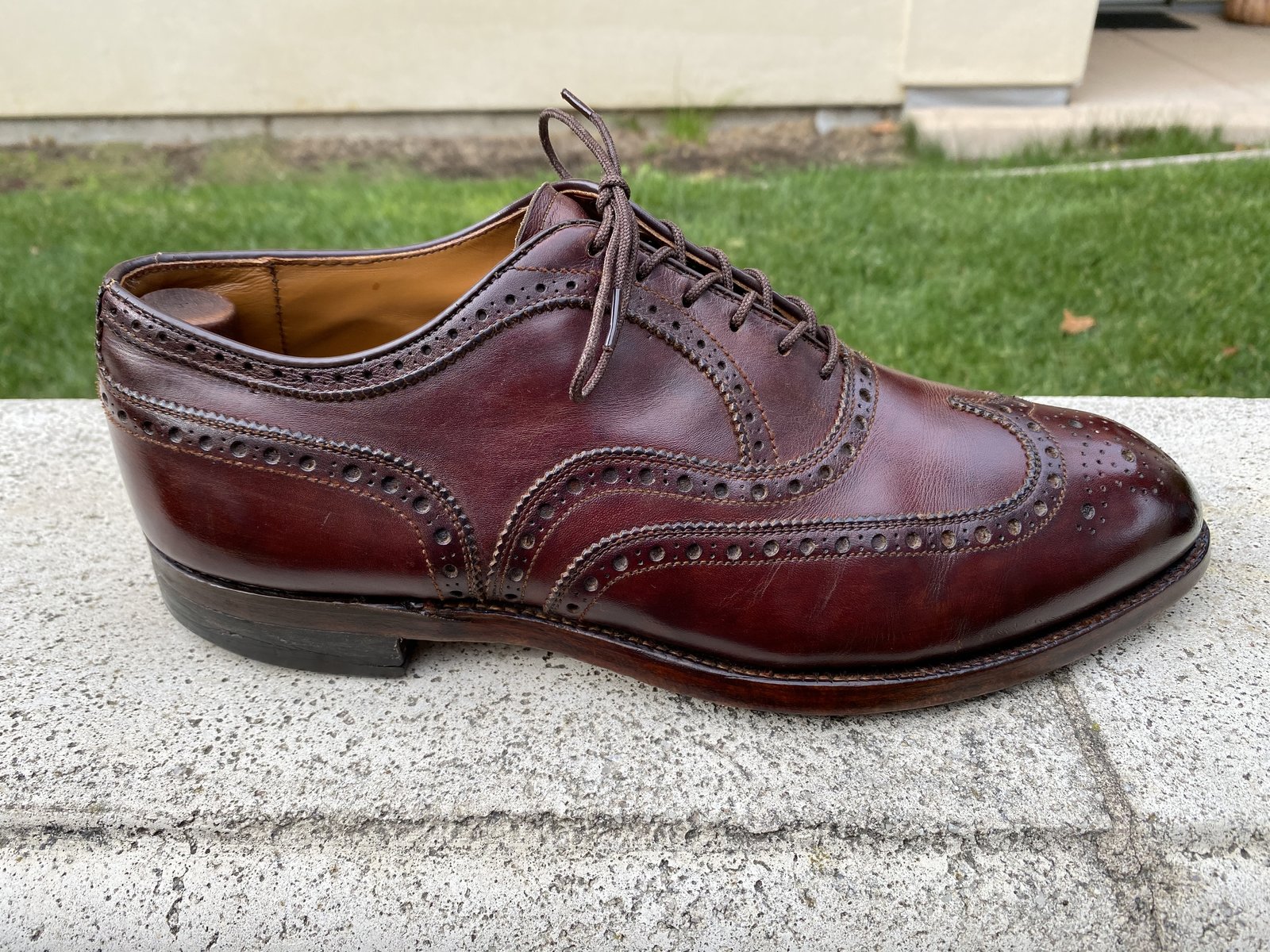 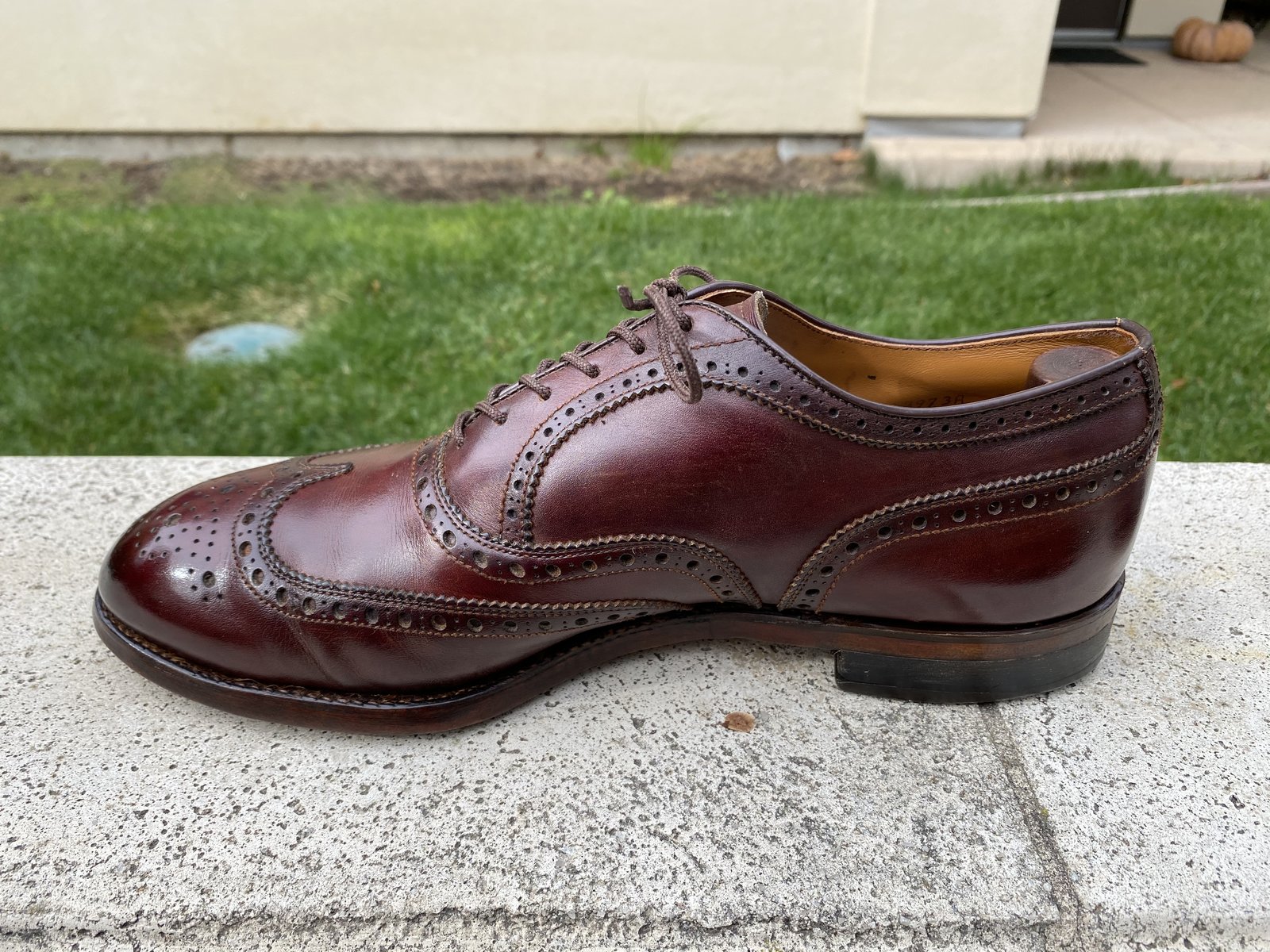 First and foremost, I must apologize. I totally dropped the ball on this revival challenge. I blame the pandemic.

I should have asked SF to blast the deadlines and remind people who were interested in participating. As of the deadline, we have one entry from @friendlygoz. Whereas we had 15-25 participants in the past two challenges.

Secondly, and after giving it much thought, I had already decided that I would not request sponsors to give out the prizes they previously promised. I take this position for several reasons:
1. Almost every sponsor is a small business of some kind, whether it be a shoe polish company, or a cobbler shop. I am cognizant the impact of the pandemic on their operations.
2. Although none have reached out to say they must retract their original offer, I am sure all have had a difficulty or two in the last few months.

Lastly, I will be reaching out to the greater collective and seek their input, about where to go from here. I do apologize again to @friendlygoz , because he adhered to the deadline and went out of his way to participate. I will figure things out, and update accordingly.

Thank you for understanding.

I didn't forget, although I left it late and managed to just finish it before the deadline today!

Here is the before and after, I have plenty more pics including the process which is all time stamped that I will post at a later date when this is updated... Well done anyone else who managed to enter this years challenge. 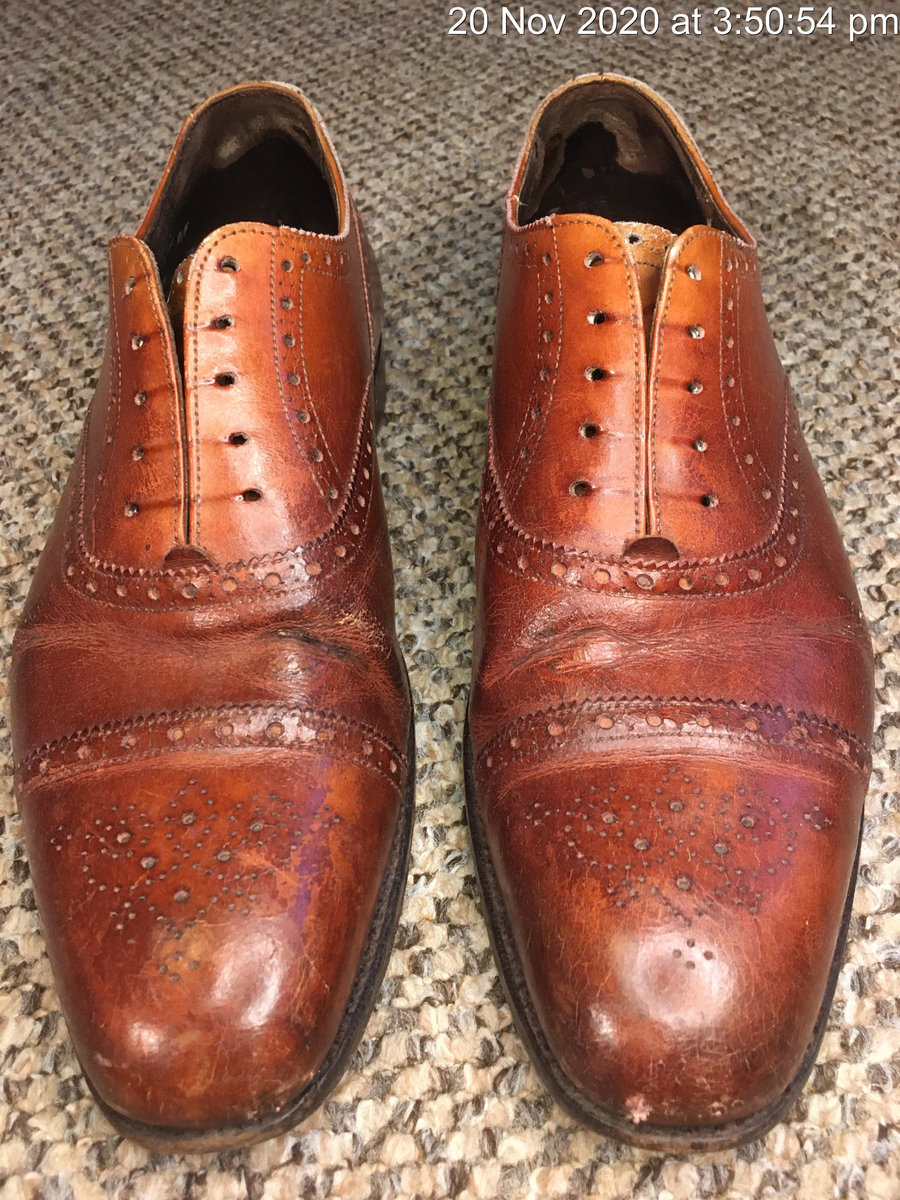 Nice work Gents! I have a pair that have been half finished on the bench since September. Well half finished is a stretch, lets call it half started. 2020 for the win.

I apologize again for the radio silence. Given there was only one entry, I am extending the deadline to May 1, 2021, 12am, EST.

I will write to the SF admin team and ask them to blast the new deadline every once in a while. Apologies again for this situation. I blame Covid.
Pant size - 34 R, inseam about 29 inches

I apologize again for the radio silence. Given there was only one entry, I am extending the deadline to May 1, 2021, 12am, EST.

I will write to the SF admin team and ask them to blast the new deadline every once in a while. Apologies again for this situation. I blame Covid.
Click to expand...