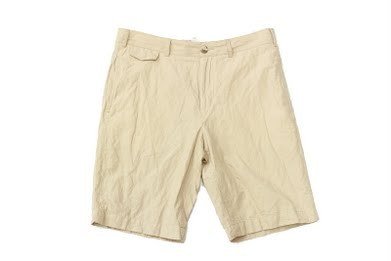 Pros: Nice, slim fit. Stylistically, exactly what I was looking for
Cons: 92% Cotton/ 8% Metallic Fabric feels like sandpaper, buttons fall off, wrinkles extremely badly
**EDIT: I'll note that a rep from LAD reached out to me and expressed her concern at my experience with their product. She also noted that the metallic fibres was something of an experiment but that they've received some feedback and are unlikely to do that again. They're also working with their suppliers to get the button issue worked out, too. I've since gotten some of their regular cotton shorts and love them- as I noted before the styling and fit are great and the quality of these shorts is definitely much better than the humorist shorts.

Point is, these shorts specifically might be a bust but it isn't indicative of the brand itself, which is high quality and has an aesthetic that matches with SF's SW&D nicely. And they take their customer service seriously, which is always nice.**

So I recently purchased these shorts from a local Austin retailer. When I tried them on, I liked them a lot. I was looking for a decently slim short with an inseam that wasn't too long and had minimal styling. Being shorts, I wanted something casual and the slightly wrinkled appearance of these seemed nice. I checked what they were made of, and it said they had 8% "Metallic" fibres. I had no idea what that meant and I went ahead and purchased them.

Fast forward one or two washings- these got a good bit of wear as they were the only pair of shorts I had. The metallic fiber of the shorts forces wrinkles which LAD folks did on purchase, but these weren't the kind of charming wrinkles you get for a broken-in item but rather really obnoxious looking wrinkles in odd places. More importantly, the hand of the fabric becomes downright awful. It feels like a low-grit sandpaper and if you wear it for a significant period of time, like all day, it becomes extremely uncomfortable on the skin. Just a dread to wear.

Lastly, every single one of the buttons on this short have fallen off. $70 is a lot to pay for shorts, I feel, but I'm willing to do so if it has the styling I want. For that price I expect that the garment should hold up decently but this has failed thoroughly in that regard. I understand that sometimes buttons pop off, no biggie but all of these have fallen off and have just added insult to injury.

All in all I can't recommend these shorts at all. The styling and sizing is decent but the experience of wearing them is awful and downright uncomfortable. This is the only product I've ever purchased from LAD but it may very well be my last. Shame on me for not asking about this 8% metallic fiber but who makes a short will feel like **** so quickly?

If you are looking for a pair of decent shorts, I recommend Land's End's linen/cotton blend shorts. I got them for about $40 or so after shipping, and with all the sale going on now I bet they are cheaper ($30 with shipping probably), and they are super soft and I am actually pleased with my purchase. They also have that slight wrinkle appearance to them due to the linen blend in it (55% i think), and they break just above my knees. I'm about 5'9" FWIW.

For Sale: SPRING Knitwear from Orcival - Size S
$20 (USD)
Life after denim is pretty cheaply built.
Life/After/denim is actually doing a decent job and the Humorist shorts are pretty cool. Problem is that with 8% metal it has to be dry cleaned. I carry the shorts in my store (www.room1550.com) and we did not get complaints about it. However, and that is something the store you bought it from should have mentioned, No matter how careful you are with the washing machine it will ruin them. The first time I encountered such a construction was with a jacket made by Nick Holland for Thomas Pink. As amazing as its construction was, I always had to be extra careful with it.
washing metallic fibres will that make it rust?

or wrinkle them beyond fixing them? Will ironing not remove them?

I have a chronicles of never tshirt and a parka by Engineered Garments in metallic fibres.

The EG one had a lot of returns.The tshirt can be twisted for more wrinkles.
New posts