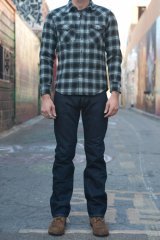 We took their 21oz indigo selvedge denim and lined the entire jean with a heavy weight triple brushed black/gray flannel, but we didn't stop there. The jean is then completely coated in paraffin for repelling water. The jean has to be rinsed twice at the factory after the coating process so the entire thing is extremely comfortable and there is no break-in period whatsoever.

The warmest and driest pair of jeans you'll ever own.

We initially made these with cyclists and motorcyclists in mind, but once news of these leaked we had an overwhelming response from customers wanting to use them during snow sports. Whether you're just outside in colder weathers or actually tearing through roads on your motorcycle during the winter months, these will be the most versatile pair of jeans you'll ever own. There were only a total of 50 pairs of these made and they will not be restocked.
Share:
Facebook Twitter Reddit Pinterest Tumblr WhatsApp Email Share Link

There are no comments to display.
New posts