Register now and order for 100.00 USD
New posts
Overview Discussion
For sale is a pair of vintage Florsheim Imperial Cordovan longwing shoes, estimated to be manufactured between 1957 and 1973 (due to flush V-cleat in shoe heels, which was moved inward after 1973). According to the v-cleat eBay buying guide, pre-1973 models are exceedingly rare. Here's your chance to purchase an incredibly well maintained pair from this era at a fraction of the cost of new shell cordovan shoes.

Uppers are in fantastic condition for their age with no appearance of added polish over the years. No rips or tears. I cleaned up a bit of dust and gave only a quick brushing and they shined right up. Very few scuff marks to speak of, which would probably brush out given the high oil content of this leather. There's a bit of vamp waving as is expected with worn shell shoes, but this is not excessive, nor is there any indication of dryness that could produce future cracking. The original soft leather lining is in-tact and the "Florsheim Imperial" logo, still visible. I'd guess these have been worn only a few dozen times over the past five plus decades.

The outsoles are original with the classic five nail pattern and stitched edges. While worn, the stitches appear to be in tact and there is no separation at the edges of either shoe. The heel is also original with the classic nail pattern and flush v-cleats, indicative of a pre-1973 Imperial. The welt is also in great shape with the wheeling looking pristine. It would look even better if some time were spent with a few q-tips and some cleanser.

The only concerning thing I found while doing my inspection was a bit of minor corrosion on the underside of the copper eyelets. The blue corrosive material brushed right off and there was no indication of damage to the calfskin lining, but it was notable and I wish to be clear about the full condition of these shoes.

I've included photos of both tongues to show that there is no tearing in the corners and that they are in great shape. Please let me know if you wish to see anything else, either close up or something I may have missed in my photos. See the link below for high-res versions.

This pair appears to be a 12A size from the markings inside each shoe, although it's possible that the lower portion of a "B" had been worn to look like an A. I've included a photograph showing this.

From the v-cleat eBay buying guide:

"The Florsheim Imperial Kenmoor [model # for burgundy version of this shoe] is the most sought after vintage Florsheim shoe on eBay. The Imperial was one of the best American made shoes in its day and this model’s Shell Cordovan leather was a step up from the more common calfskin Imperials. The shoe has the classic “gunboat” long wing style that was very popular in the USA during the 1960s and 1970s and remains somewhat popular today. It’s goodyear welted double leather sole and armored heel means its a very durable shoe.

The Florsheim Imperial 93605 was made from about 1957 to 1988. It was preceded by a similar model called the S-1724 Viking. Outside of the heel change in 1973 (v-cleat no longer flush with the edge of the heel), the model materials and design largely stayed the same over the years. Pre-1973 examples are fairly rare though.

This was one of Florsheim Shoe Co’s premium models and was an all leather shoe with full glove leather lining. It featured a double leather sole accented by 5 nails and a leather heel with v-cleat and 50 to 80 nails. The heel is essentially a steel heel held together by leather. This limits traction and is why some call it a “suicide heel” due to wearers slipping and falling on smooth surfaces. If you find a pair with a rubber heel, the heel was replaced at some point (and probably by someone who fell). The Florsheim 93605 was eventually replaced by the almost identical Royal Imperial 97626 in the 1990s." 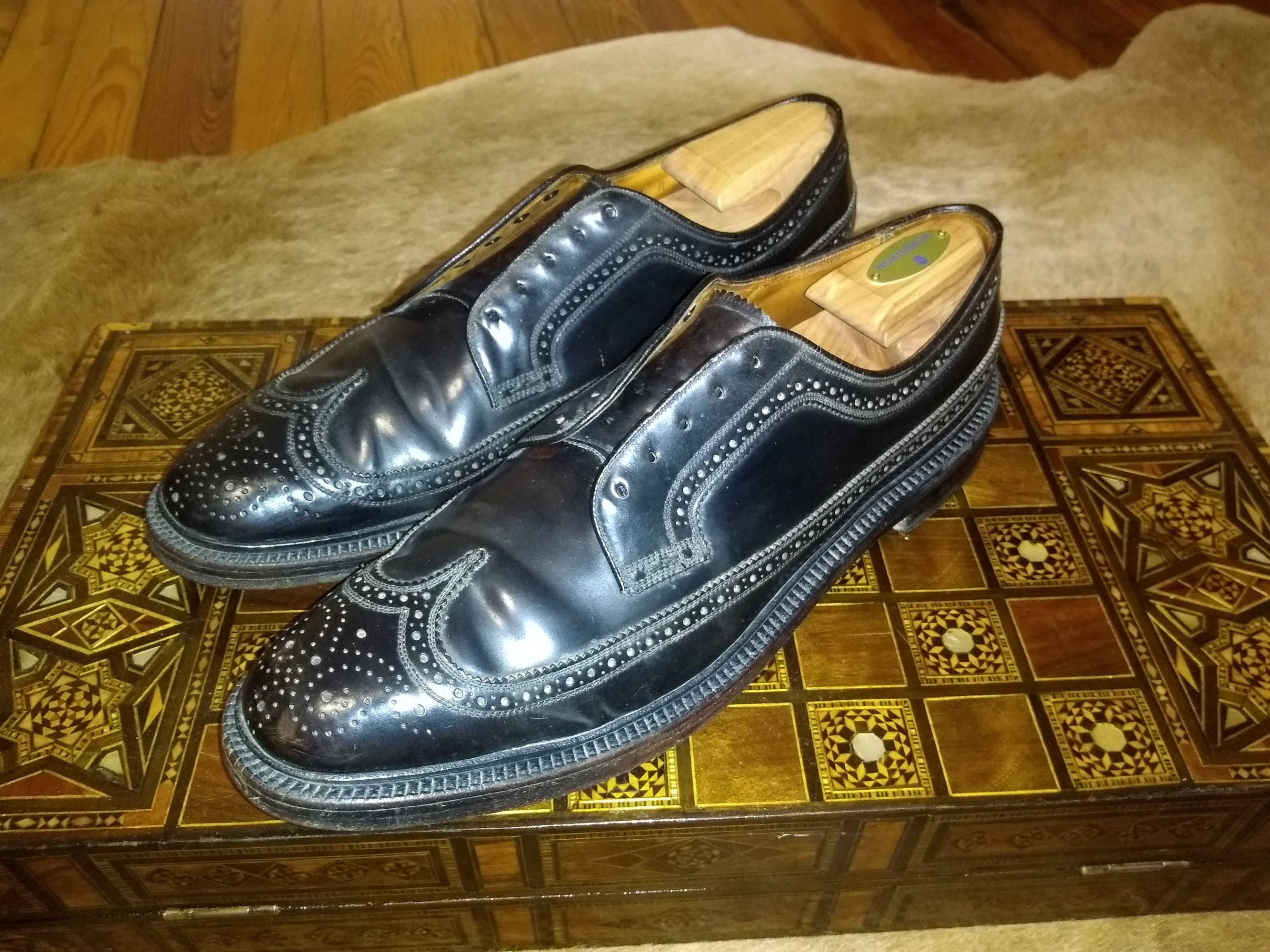 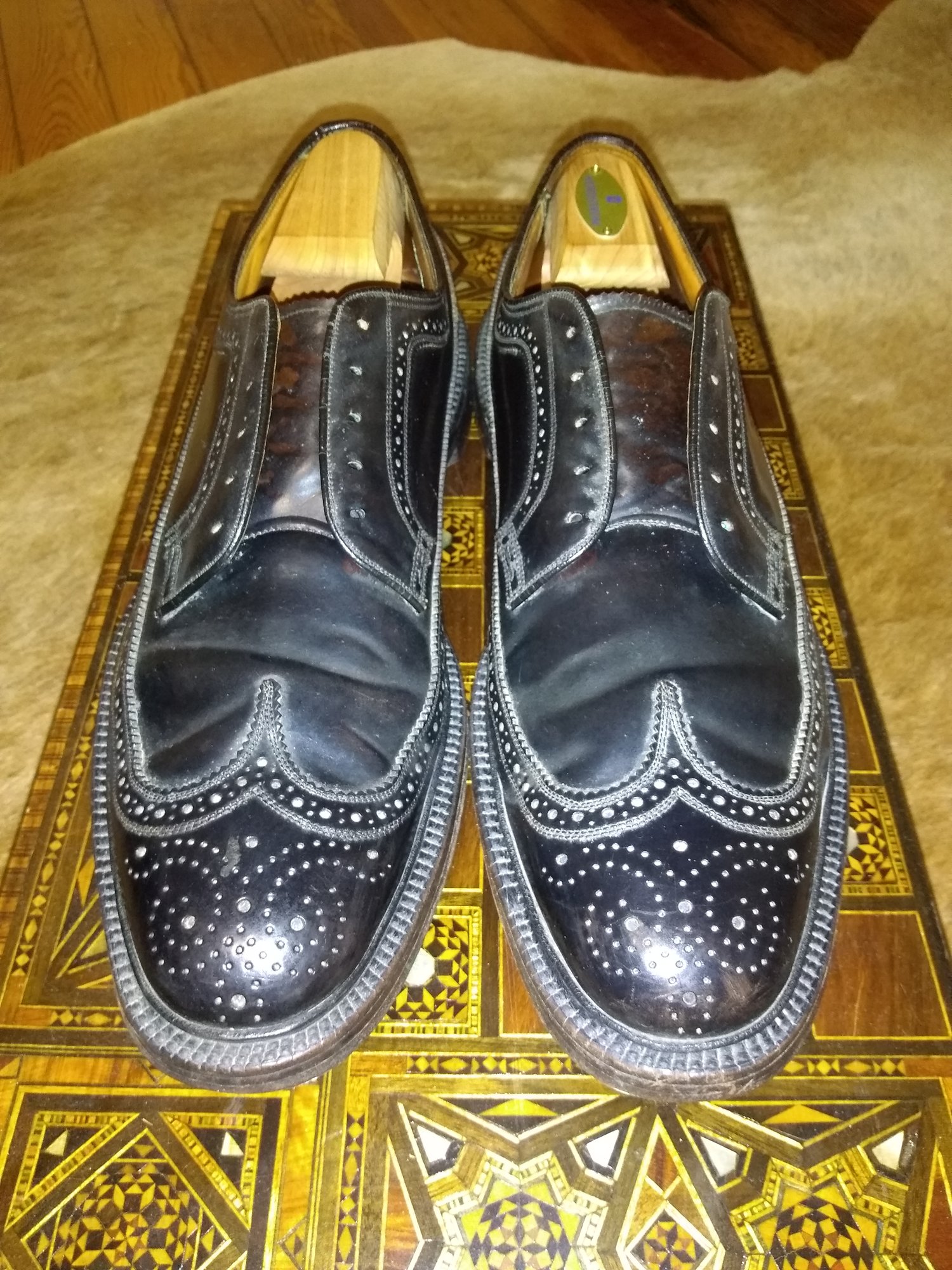