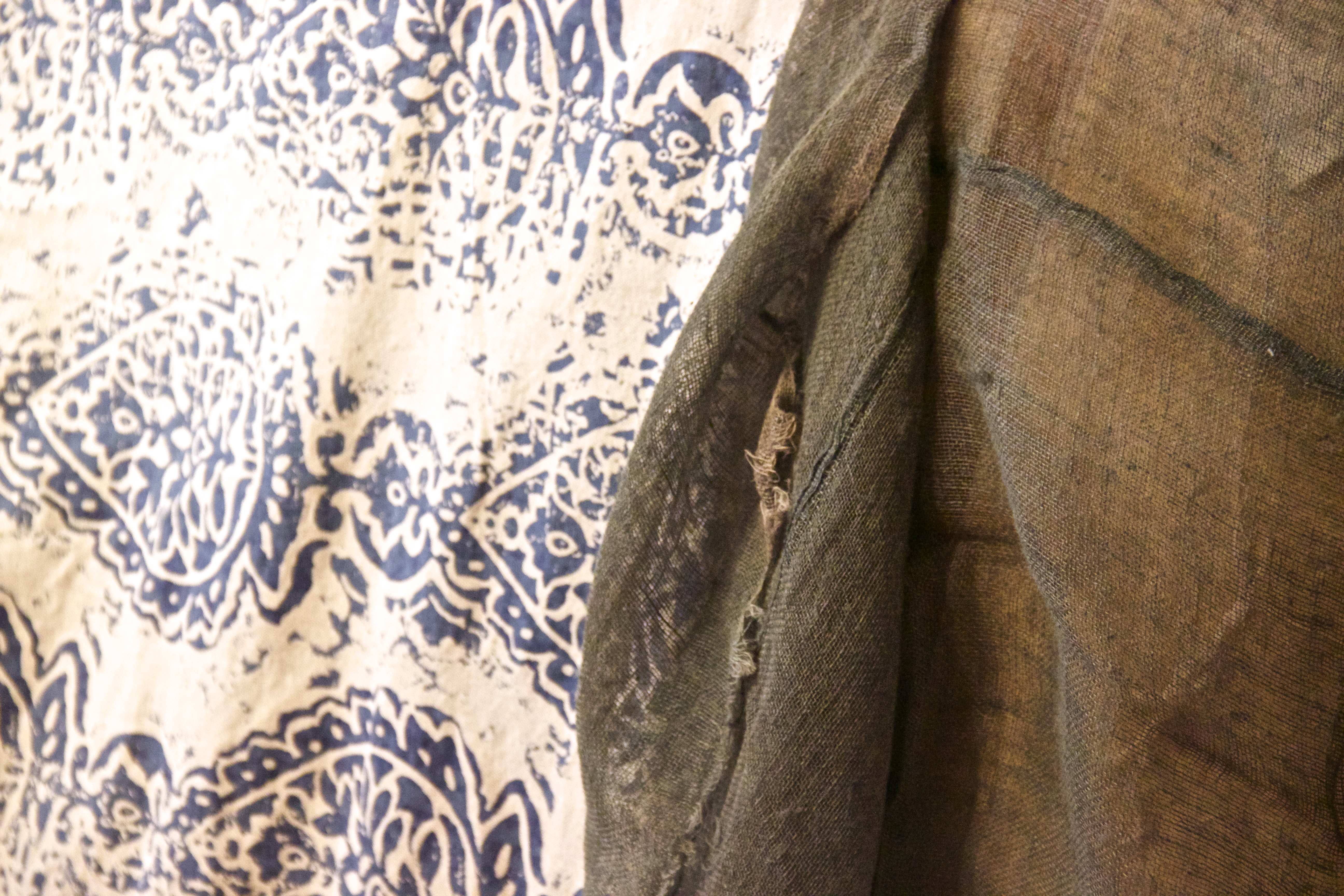 A selection of antique Japanese fabrics

If you have been a member of Styleforum - or any online clothing discussion - for longer than a month and have managed not to read the words wabi-sabi, I commend you. It’s mostly tossed around in denim circles, where it’s translated largely as “sick fades, bruh.” It’s a particularly Japanese expression, and it has no direct English translation. It means - loosely - finding beauty in transience: the turning of seasons, the gradual decay of material objects, and in, I suppose, the eventual heat death of the universe. Our man John Clayton thinks that the seasonal obsession with cherry blossoms is the perfect example.

Mottainai is another wonderful term which has no real direct translation into English (there’s a theme here). It comes from the Buddhist belief that inanimate objects have a soul, and it suggests respect for material and for resources - and a sense of regret regarding wastefulness.

For Mitsugu Sasaki, proprietor of the Etsy shop Sasaki-Yohinten, wabi-sabi and mottainai are his guiding principles. He sells fabric, as well as vintage garments that he has patched and re-made using other antique textiles. I bothered him via email for some thoughts on the links between wabi-sabi and mottainai, and he was kind enough to oblige: “Wabi: frugal is beautiful. Sabi: tranquility is beautiful. Mottainai: use it until you can’t - no dumping it. A hundred years ago this was more important, because the Japanese were very poor. Now, for example: this vintage jacket is so cool but there are many stains; I want to wear it but I cannot. I get a warm feeling from old fabric. This feeling is ‘mottainai.’” If you’re of a particular mindset, you get your pleasure out of wearing garments that showcase these exact characteristics.

But lest ye think yourself too authentic, according to Styleforum’s hard-hitting Tokyo correspondent Alex Scharf, “‘Wabi-sabi’ is something you hear a lot more from foreigners describing Japan, making it something exotic, than something Japanese people actually use. I've never actually encountered this word while living in Japan and most of my friends have no clue what it means.” And, sadly, mottaini hasn’t stayed particularly true to its roots in Buddhist philosophy - it’s mostly what people say when they spill their coffee. So instead, let’s go for extra credit, and add a third word to your ever-growing lexicon.

Shibui refers, according to Wikipedia, “to a particular aesthetic of simple, subtle, and unobtrusive beauty.” It’s also one of the most confusing words I’ve ever tried to unpack, so I invite you to do your own research. The term usually refers to aesthetics, but not solely to art - utility is also valued, and there’s a sense of the unexpected involved in being shibui. As Alex put it, “Getting roasted green tea ice cream instead of strawberry is a ‘shibui' choice of ice cream.” Your set of hand-thrown sake cups that revel in their imperfection might be shibui, as might your sashiko chore coat that’s been hand-dyed in natural indigo. If you’re one of the people who likes to collect patchwork boro clothing or throws, your acquisitions might be wabi-sabi, mottainai and shibui all at once. Unless they’re too emphatic and obvious in their pursuit of these characteristics, in which case they likely fall short. I told you it was complicated.

In the Western world, re-purposing used fabrics has been a feature of runway fashions since at least the days of Margiela’s deconstructionist approach to clothing, and brands like Junya Watanabe, Needles and, more recently, Vêtements (which follows close in Margiela’s footsteps) have shown designs reworked from vintage or discarded garments. Niche brands such as Label Under Construction, By Walid, or even Monitaly (to name just a few) have similarly re-used pieces on offer; LUC makes pants from the fabric of used Italian bread bags or military fabrics, By Walid creates clothing using recycled vintage fabrics, primarily Middle Eastern in origin, and Monitaly offers both trousers and outerwear made from used US military tent canvas. You are free to discuss the irony, or lack thereof, in the consumption of products based on these principles, in the comments below. 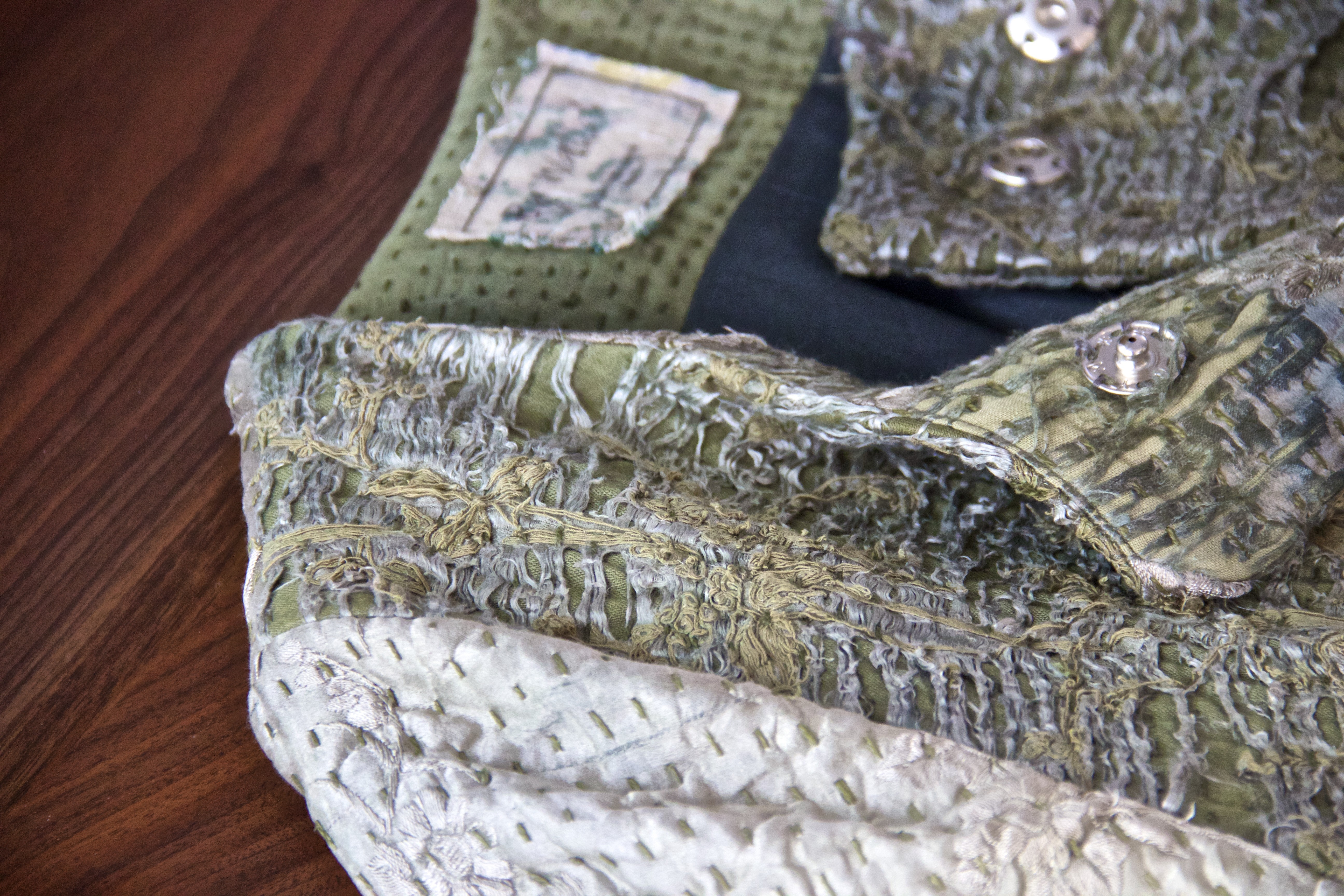 A coat from By Walid, made from repurposed scraps of antique fabric

But partially inspired - one hopes - by a rejection of current trends towards overconsumption and fast fashion, some consumers are turning to recycled or up-cycled garments to get their fix. It’s not just the fair-trade crowd: companies like the mildly-well-known English “brand” De Rien sell what they happily call “rags” out of Portobello Market in London, as well as produce garments based on old patterns. There has been a boom in small vendors, too - although vintage clothing has certainly never been “out,” there is a renewed interest in antique fabrics. Internet outlets such as Etsy and eBay provide craftspeople and collectors worldwide with access to vintage fabrics and clothing, as well as to new, unique creations made from patchwork assemblages of materials.

Thanks for staying with me through all of that. The thing to remember is that there’s both fantasy and honesty in all of these terms. And they’re linked! You should get them tattooed on your ankle. So, the next time you’re wearing that wabi-sabi’d, patched noragi that gives you a great feeling of mottanai, you can tell your friends that it’s not just cool - it’s hella shibui.

Sorry but you don't understand what wabisabi is. It's an unsophisticated, natural refinement. You learnt your lessons about thermodynamic, congratulations, but it's not only a matter of transience and absolutely nothing to do with a "heat death of the universe" since wabisabi isn't morbid, you make a confusion between it and "emo"/gothic etc.
Great article!
I didn't know any of that, thanks.
Well, I'm Japanese, but can anyone tell me what's half canvassed and fully canvassed in Japanese? I want to ask store associate about construction every time I go to shop near my office, but I don't know the word for it.
Paradox of being highly appreciative of subtle things in life coupled with being one of the most homogeneous, artificial and uninteresting people.
:NO BODY IS IMMUNE TO HOLY CONSTITUTION:
Only just came across this. Nice article.