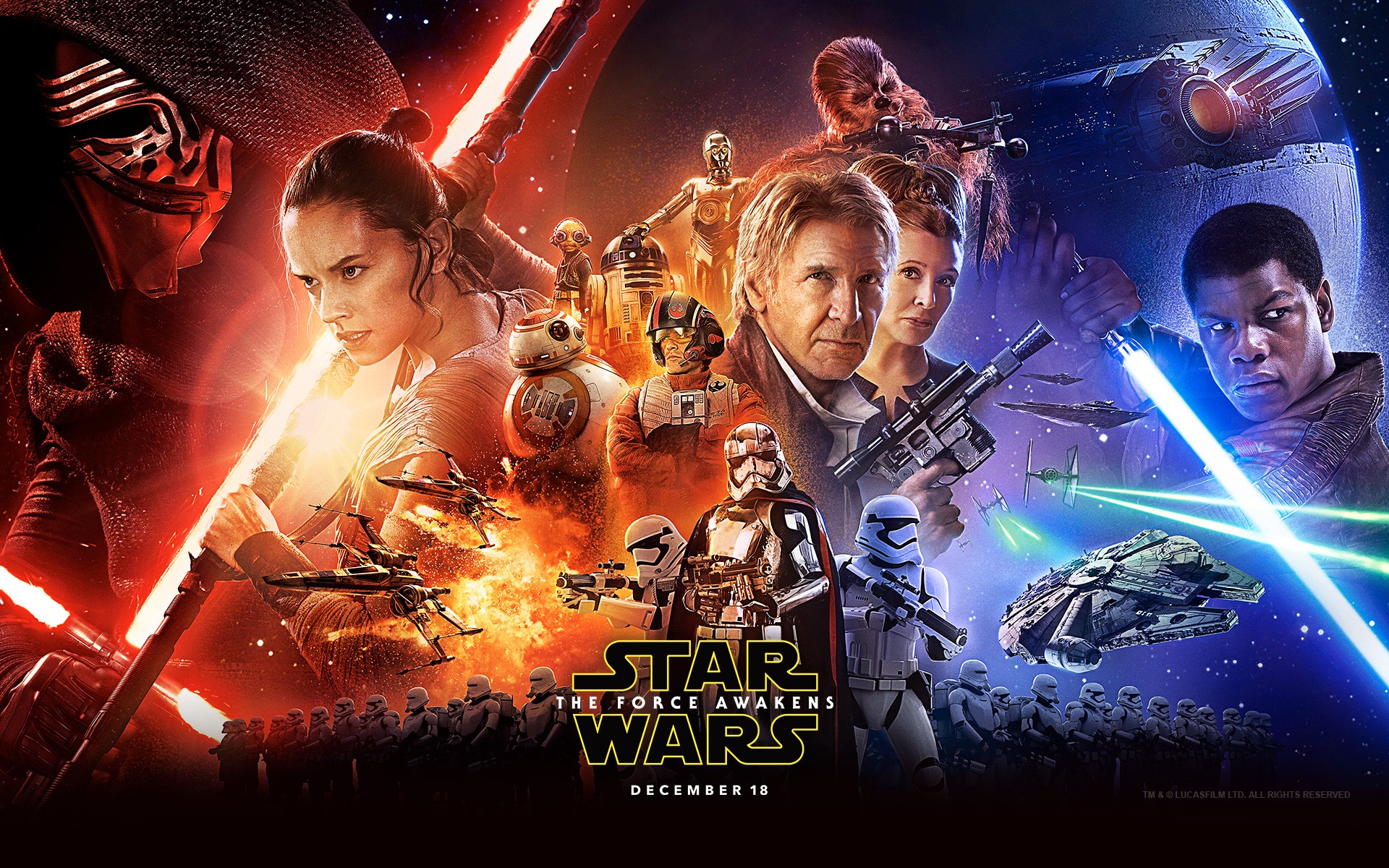 When a film is meant to re-revive what’s arguably the greatest cinema franchise of all time, I imagine it’s tough to maintain the balance between resuscitating the original Star Wars trilogy (because let’s face it - we all want to pretend the prequels never happened) and making something new and fun and fresh. That toughness shows: at times, Star Wars VII: The Force Awakens inspires unintended but unavoidable eye-rolling. At others, it gives way to big grins and some quiet cheering. It’s not going to change the world, but it will probably leave you with a smile on your face.

The biggest revelation of The Force Awakens is by far the new cast. They do a bang-up job, and left me genuinely excited for their next adventure. Daisy Ridley’s Rey is an excellent new heroine, and John Boyega seems to have been born for the role of Finn. It’s the interactions between Rey, Finn, and hot-shot pilot Poe (Oscar Isaac) that feel the most exciting, that manage best to rekindle the romantic melodrama of the original trilogy without descending too far into caricature. The always-overwhelmed Finn and fast-talking Poe play off each other in a way that Luke and Han could only dream of now, and Rey’s so self-assured as to give any villain pause. Even BB-8, the R2-D2 of the next generation, has enough of a personality that I think we’ve finally found the droid we’re looking for.

On the other hand, I was no real fan of Kylo Ren (Adam Driver), who in comparison to a young Anakin Skywalker feels both more villainous and equally whiny and ineffectual. I imagine that the goal was to show both how childish he really is, along with the ways in which the dual callings of the Light and Dark can tear a person apart, and it’s certainly interesting that if the character that apes Luke’s role in the original trilogy isn’t not one of the good guys. But despite the efforts at complicating his personality, it seems that Ren will need more fleshing-out before we really start to care about what happens to him. Of course, those tantalizing mysteries are expected to weave together another two movies, so don't hold your breath for any answers.

In the end, it’s a good thing that the old guard feels a bit lackluster (forgive me, Han) when confronted by these young upstarts, because by the final scene you’re ready to follow them across the galaxy. I think that we can all agree Star Wars needed an injection of liveliness in the wake of the last ponderous installment, and the new cast delivers that with aplomb.

But my biggest issue with the film is that The Force Awakens is too familiar. There’s too much pandering to the past, too many nods and winks to old devices. It relies on a plot we’ve all seen before to introduce the next generation of heroes, as well as the next generation of relationships - both familial and otherwise - that will define these new conflicts. This wouldn’t be problematic (Star Wars is about people, after all - right?), except that the film comes off as over-dependent on its own internal legends. There’s no trace of the multi-faceted human myth that made the original trilogy so compelling. By now, the audience knows we have to search for the Last Jedi, because that’s what Luke already did and that’s what the movie poster told us we're off to do again. The Resistance can tell that these new kids are heroes, and as long as we blow up all the things, the day is saved. It makes for a lot of pretty pictures, but not a lot of big dreams.

Well, who cares? The Force Awakens is old-fashioned escapism, it’s pop-opera, and it does its best to appeal to those of us without several bookcases devoted to the various universes of Star-Wars spinoff media. At times it does it pretty well. Who’s not going to get excited by the sight of a group of X-Wings leaping into hyperspace? Or the ominous sound of twin ion engines burning towards a rebel settlement? Especially when it’s obvious that both have been portrayed with real love - even Poe can’t contain himself when he gets into the cockpit of the Empire’s most famous spacecraft. Unfortunately, fluff only goes so far. The first movies took their time building relationships, and this one should have done the same. The revelations, such as they are, are meant to be emotional, but there’s too much been-there-done-that, too much overshadowing by grand sets that you never have time to appreciate, for them to have any real punch.

Ultimately, the line between homage and something approaching plagiarism becomes blurry at times, and the fan-service, while expected, is overwhelming - with the exception of a handful of moments that will bring a smile to the most cynical face. But I hope that with a changing of the guard and a breath of much-needed vigor, we can go beyond forcing a chuckle at old jokes to making new memories. The Force Awakens might not be A New Hope (and thankfully so), but it’s at least a glimmer - and ideally a prelude to what’s to come. I, along with most people who just want to spend some time traipsing through a galaxy far, far away, will be looking forward to the next installment. As far as reprises go, this one’s fun - it remains to see if the sequels will be anything more.

Want to share your thoughts on The Force Awakens? Check out our official Star Wars Thread (Warning: may contain spoilers!)​

Very fair review. I saw it at the weekend and at times it brought out the 6yr old kid who went along to see the original Star Wars (I refuse to go along with the re-naming). For me it was arguably the best film in the series since 1980 - yes I think it was on the whole a better film than Return of the Jedi, but not as good either the original or Empire Strikes Back. Yes the plot followed/played with the plots of the first two films a little too much, but hey apart from the Clone line it pretty much ignored the dreaded prequels. Good fun, a promising young cast, and more models than CGI. Much better than I feared and arguably as good as I hoped, but not quite fully recapturing the magic of the first two. If the next one has a slightly higher non-battle to battle ratio, and a bit more fleshing out of characters then it could be very good.
Originally Posted by Miran ManofKent, with all respect, is ripe...
Originally Posted by Synthese Friendly heritage icon
Originally Posted by brad-t SF is gettin weird
BIggest gripe is how structurally similar it is to ANH. There´s a bit too many "chance encounters" that work for the progression of the storyline but elsewhere I thought it was a good Star Wars movie, and quite the palate cleanser.
kunk75 "please refrain from logical observations so we can discuss marxist ideals while buying 2k fingerlessgloves"
You must log in or register to reply here.
New posts