Located less than ten miles from the Magnificent Mile, the heart of Chicago’s high end shopping district, Horween Leather’s factory is a factory in every sense of the word. There’s a trend among high-end, American brands to visit sites of production and created stylized, narrated videos of artisans carefully crafting shoes in slow motion, set to classical music. It’s the Jiro Dreams of Sushi treatment: these workers are not making a product; rather, they’re artists, and the factory is their studio.

The outcome is incidental to the process. While enjoyable to watch, these videos are always infused with a Disney-like artificiality that is stripped away when juxtaposed against the reality of Horween. Horween does not exist so I can write this article, or for us to fawn over their product. They exist because they occupy an important niche in the leather industry and produce a quality product. No more, no less – and that’s a good thing, worthy of note.

Located in one of the few industrial parks remaining in downtown Chicago, which, according to Nick Horween, might soon be zoned for condo development, Horween is a true working factory. The building itself is a marvel: it reminds me of a line from my favorite novel, Neuromancer: the place “bespeak a turning in, a denial of the bright void beyond the hull.” The factory building is old, predating Horween, which has occupied it since 1920. The first thing you notice is its rambling nature: it’s a mixture of brick, wood and metal, and has grown organically over the years, adapting to changing markets and water regulations. The building lack the airiness and size of many modern factories, or the tidy assembly line nature that we imagine defines modern production. Instead, the ceilings are low, the floor is uneven and at times covered in water runoff. There’s no orderly sense of progress from room to room: a room where leather is waiting to be shipped out is next to an area where fresh hides are being cleaned.

Nick, the fifth generation of Horween, and I start on the bottom floor, where fresh hides arrive from slaughterhouses. The process he describes to me is complicated, and I have no hope of reproducing a flow chart of what exactly is going on in each step of production. There’s no mistaking where these hides came from and what they are, though: their edges are ragged, their surfaces nicked where a skinner’s blade might have slipped, and they have the texture of animal skin (which, lest we forget, leather is). There’s a noticeable smell too – not unpleasant or of heavy solvents – but earthy and animal. 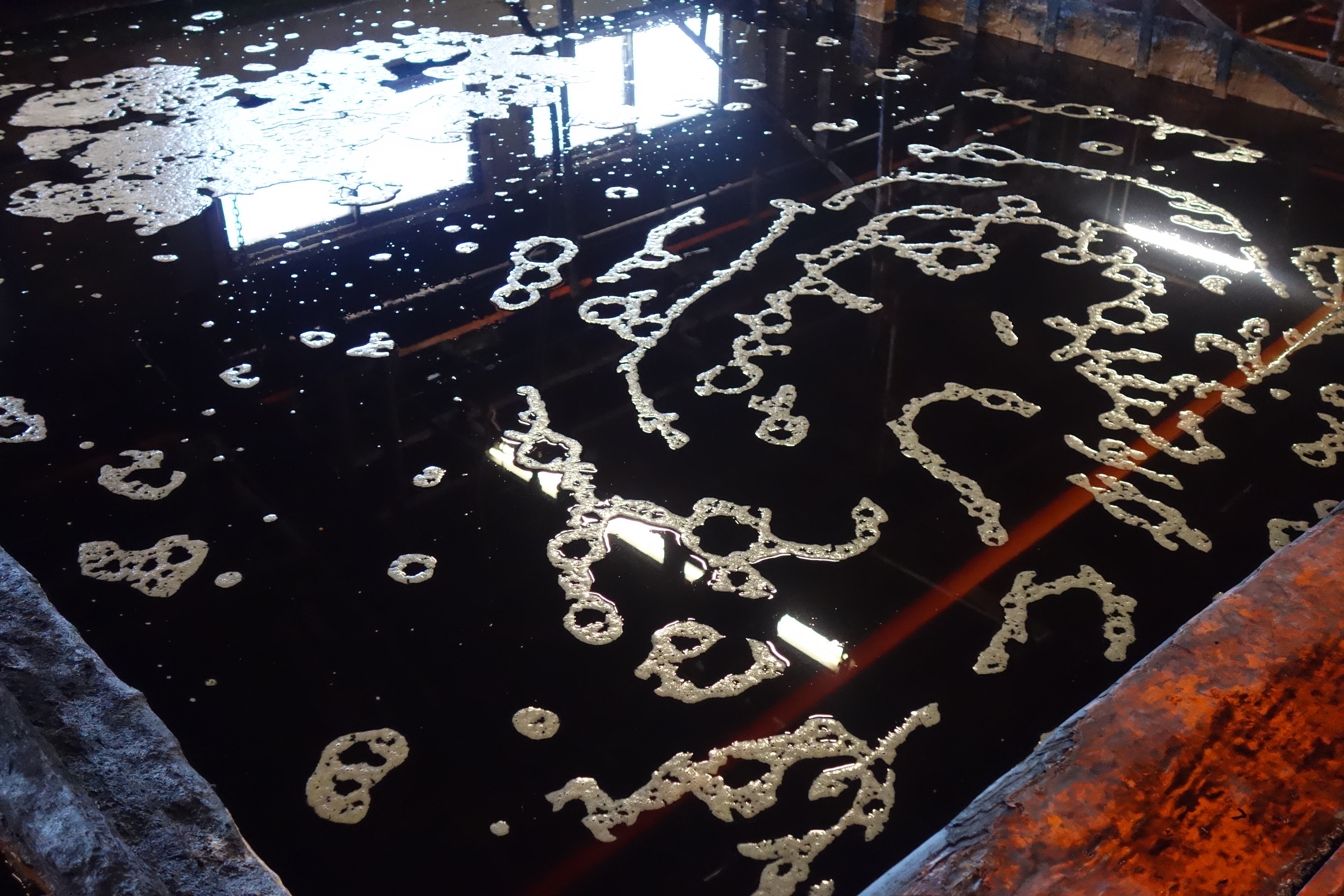 The Pits. Tanning Pits, that is.

The fresh hides are first trimmed and cleaned, placed in gigantic, revolving barrels filled with thousands of gallons of water and natural cleaning products. The water runoff is impressive, and loud: water pours in giant sheets from the sides of the barrels, overflows onto floor. Horween’s water bill must be impressive.

The horsehides are then placed into large tanning pits – imagine a giant wooden trough filled with an opaque mix of unnamed chemicals that slowly undulate back and forth – for several months, where they absorb fats, oils and greases which nourish the skins and impregnate them with moisture. All the materials used by Horween are natural, including tree bark and beeswax, which produces a better product, but drives up costs. 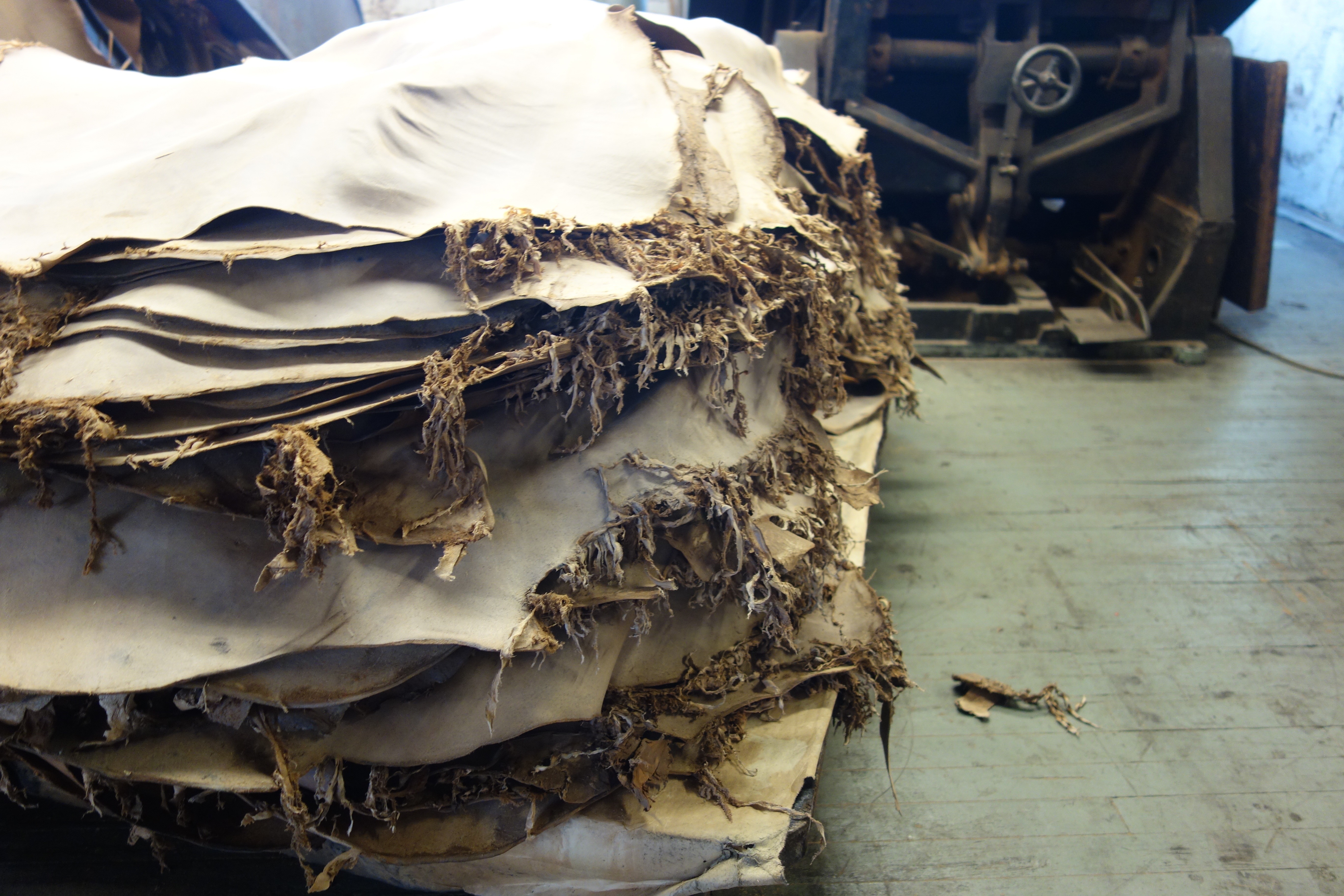 Two months later, when removed from the tanning pits, the leather is stiff and tough, and moisture and oil must be reintroduced. Much of this process is performed by hand, with a single employee working one piece at a time, oiling the shell over and over again. The time commitment is impressive, especially considering the demand. It’d be easy to cut corners, but clearly the process is what’s important: it’s been virtually unchanged for almost a century. Once oiled, sanded and trimmed, the hides need to be slowly dried, which takes place in large rooms staffed with gigantic, homemade fans.

As we’re following the shell butts – the trimmed segment of the horse hide which will become shell cordovan, literally cut from the butt of the horse – through their lifecycle, we pass by the stamping area, where leather is embossed with patterns. An entire machine is dedicated to a well-known design: the raised bumps of a football, nestled around a “W”. Horween provides leather to Wilson, which creates footballs for the NFL. Another machine stamps out a pattern we’re more familiar with: pebble grain. There’s been some debate about the quality of these leathers (some are corrected grain, which isn’t inherently bad) but the leather being used for stamping is clearly high qualityc(http://www.styleforum.net/t/233603/pebble-grain-love). 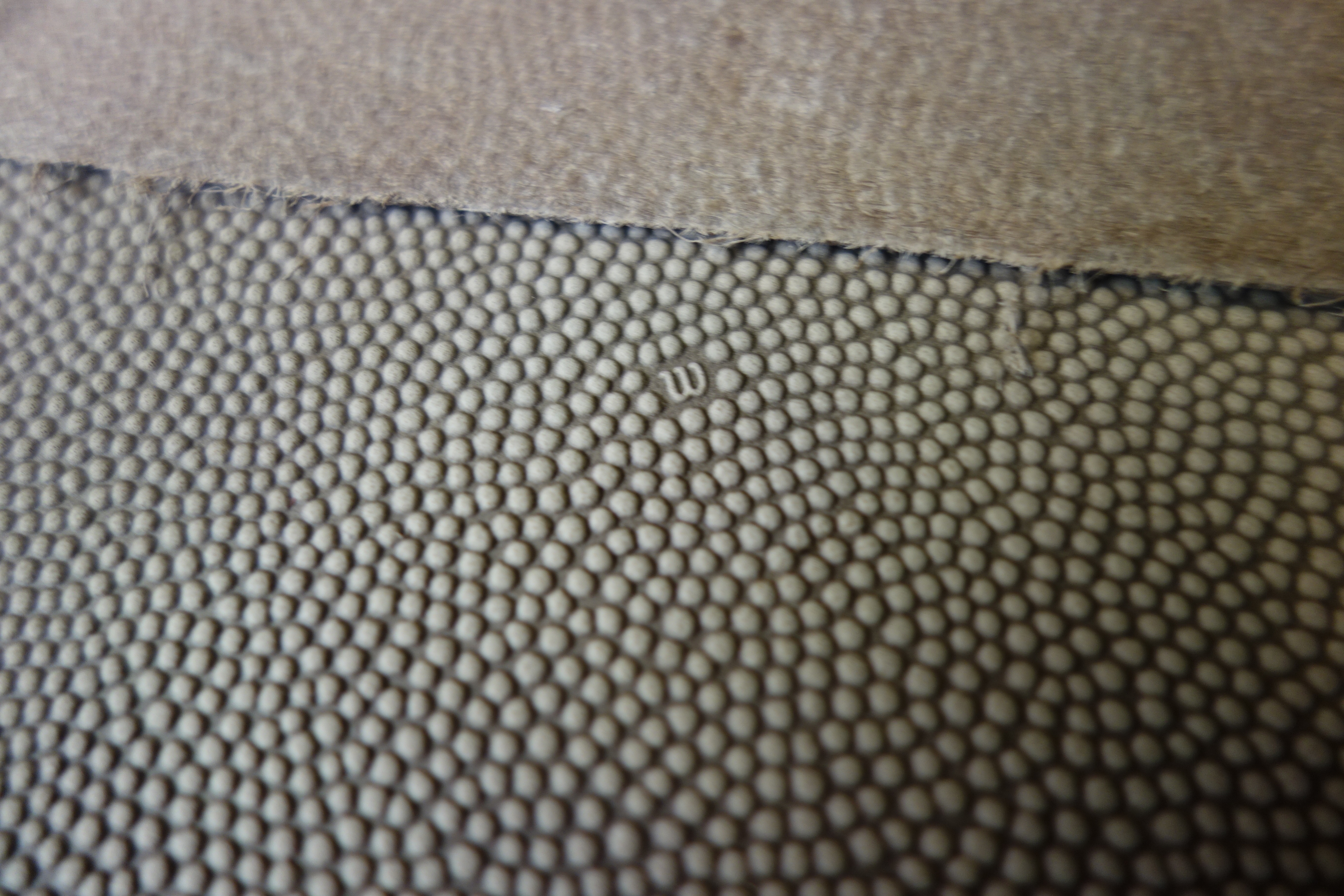 Surrounding the stamping area is the fruit of the long shell cordovan production process: piles and piles of finished butts, cut into the familiar figure eight shape (they’re literally butts) in every possible shade. There’s navy, black, no. 8 (which originally got its name from the “no. 8” dye that produced the famous eggplant color) and even whisky. The lighter colors are the hardest to produce because they require flawless hides: a saturated color can cover minor imperfections in the hide; with whisky, there’s no room for error.

The final step is grading, measuring and packaging the shell. Shell is sold by the piece, and each and every scrap is accounted for. It’s rare stuff, and seeing the piles packaged up is an almost cathartic experience: they’re finally finished, and after 6 months are leaving Horween. 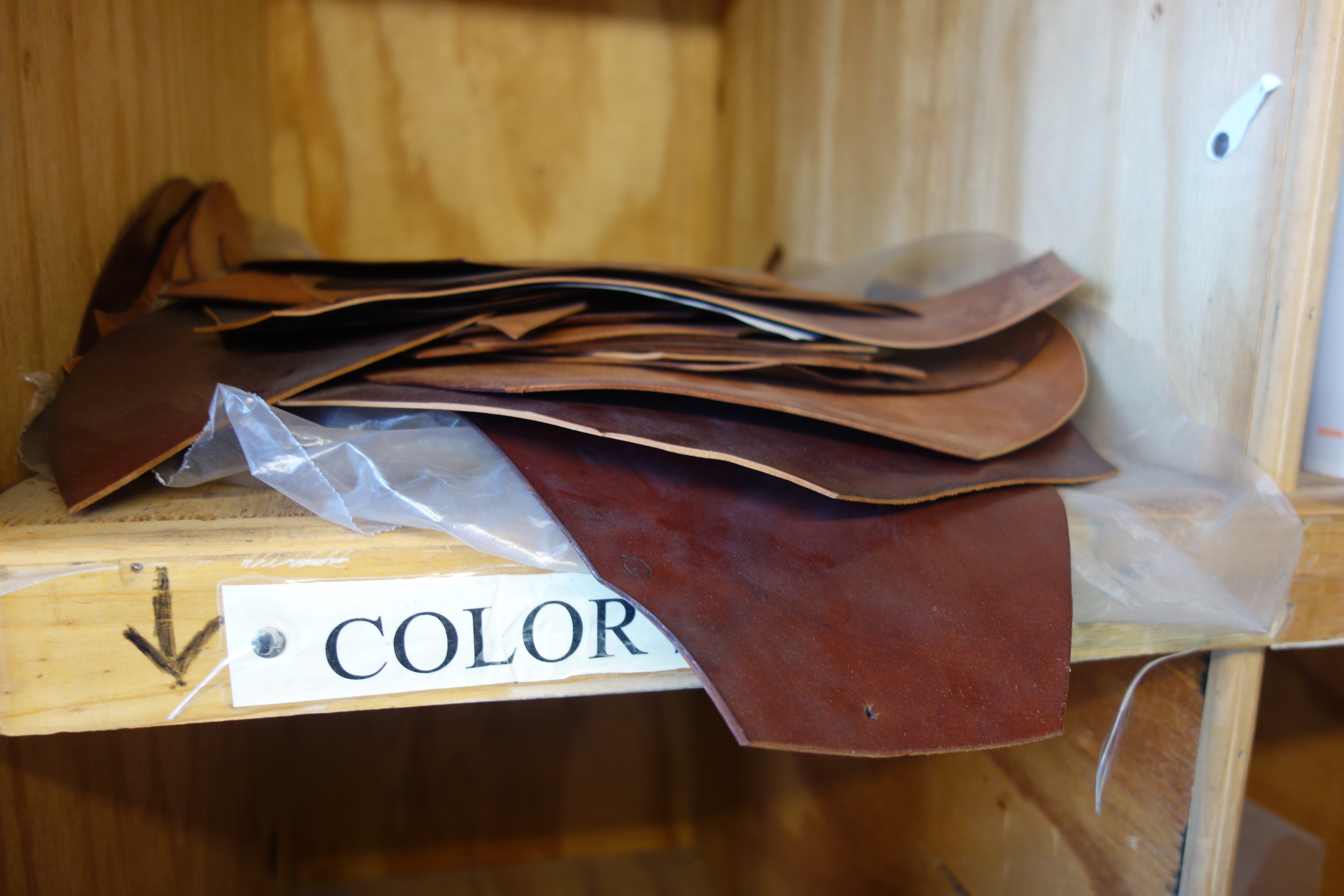 Scraps of finished No. 8 Shell

The recent emphasis on Americana and American production, which emerged hand-in-hand with the global economic downturn (if you’re buying fewer things, you care more about their provenance and quality), has created a new demand for Horween’s products. According to Nick, they cannot produce enough shell cordovan to meet demand, limited by the supply of suitable horsehides and the time shell takes to create, and are forced to turn away new customers. This demand, too, has created new opportunities for Horween in new product spaces. They currently are producing the leather used in Motorola’s Moto X cellphone, which has an option for a leather back, a partnership that may not have emerged without a growing emphasis on American production. 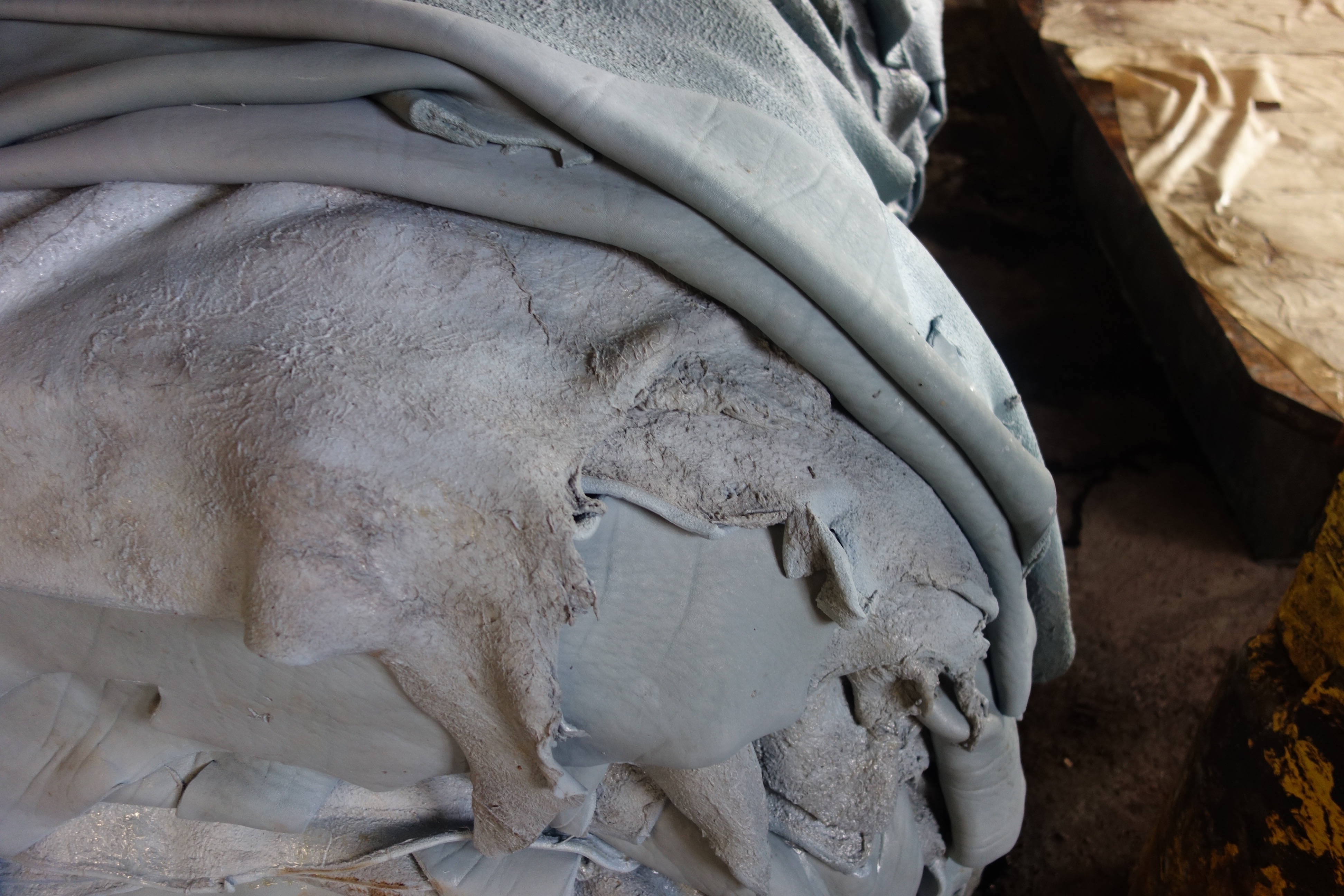 Horween is part of a dying breed of American leather producers. They’ve carved themselves an important niche within the larger industry: they produce high-end specialized leather that requires lengthy production times and considerable handwork. With their reputation in clothing circles, as well as their impressive list of customers – Wolverine, Carmina, Crockett & Jones, Edward Green, Alden, Allen Edmonds – they have excellent prospects, and I wouldn’t worry about them going anywhere soon.

Their biggest challenge according to Nick, is finding people interested in working in leather. Their employees tend to fall into two camps: those who work for a year or two and quit, or those who have found a lifelong career. When we walked through the factory we passed people who have been at their jobs longer than Nick has been alive, and have seen him grow up in the family business. The work is hard, and intensive in a blue-collar way that the American economy has moved away from. Horween’s employees are essential to their process: with so many steps of the tanning and dying performed by hand, a skilled worker can have enormous influence of the final product. Dyeing in particular requires a deft touch: too much dye, and too much time spent immersed in the dying solution can ruin the leather; too little, and the leather won’t stand up to wear and remain colorfast. 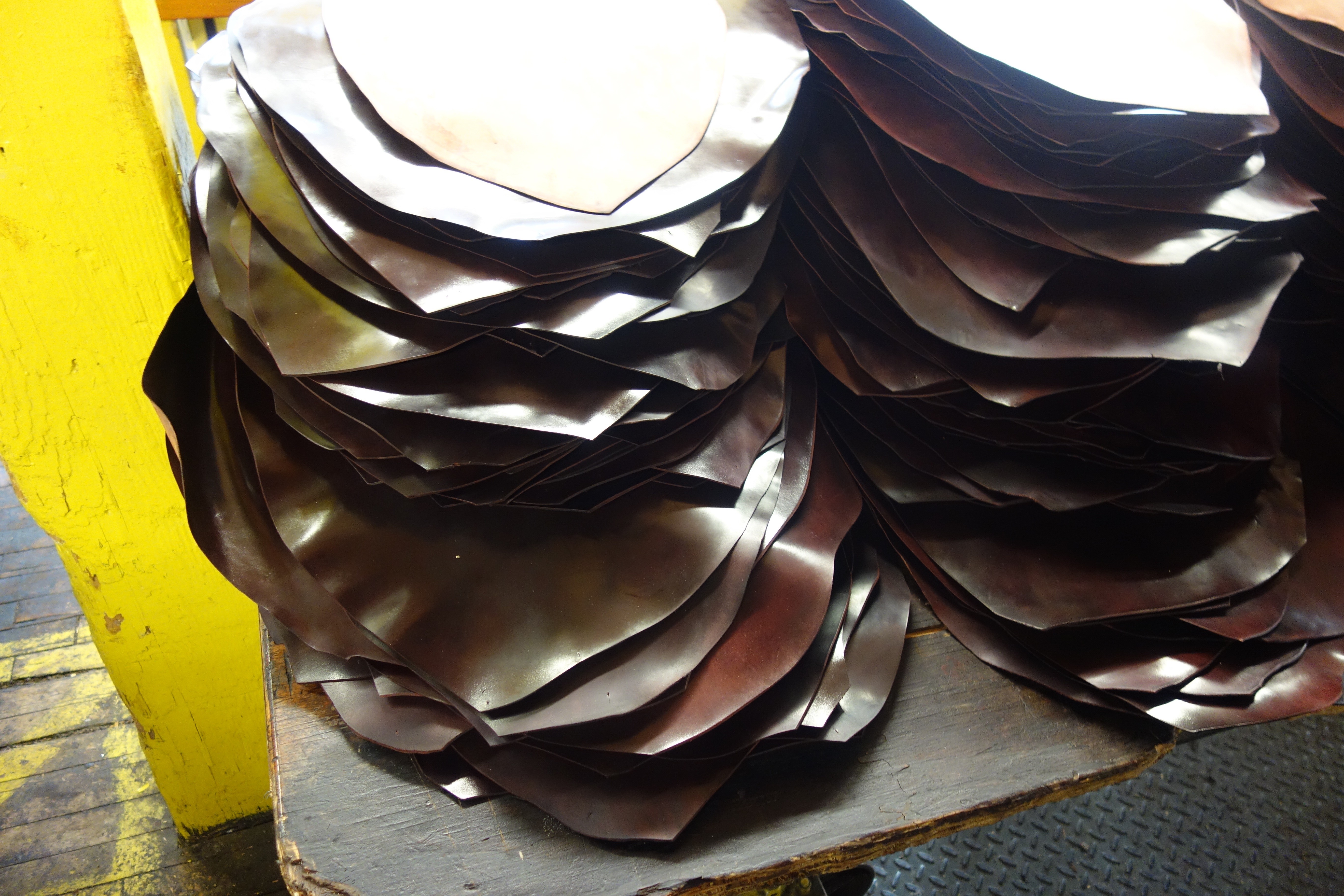 Horween has also outlasted many of its traditional suppliers. They struggle to find sources for quality, natural dyes, and many of their historical providers have gone out of business. They even build their own drying fans and create their own handcarts. I jokingly told Nick that the weather beaten carts would look right at home in a Williamsburg living room, and he replied that customers have offered to buy them.

A common criticism levied at the Western consumer is that we’re too detached from the process. We demand high quality meat, but know nothing about animal husbandry or butchery. We want organic, hand cultivated produce, but know nothing about farming. And when this interest exists, it exists in the Portlandia vein, an obsession with the details in an attempt to assuage existing guilt. I think, to some extent, this criticism applies to fashion as well. One of the tenets of StyleForum is moving past fast fashion to purchasing well made clothing that will last for decades. Part of this movement demands an understanding of what constitutes well made clothing, and where these materials come from. For my part, having visited Horween, I feel much more attached to my shoes, and am able to appreciate quality materials in a new way.
Share:
Facebook Twitter Reddit Pinterest Tumblr WhatsApp Email Link

Great leathers and used them a lot over the years - if only they were British I could enjoy making my goods with them but want to keep to the patriotic plan!
Long may they continue to produce such unique and brilliant quality material.
Cheers,
Tim Hardy
Tim Hardy - The Worcestershire Leather Company

10% Discount for Style Forum members using code SF10 at the checkout
Thank you - great read
Good article, I have a pair of Timberland shoes made from horse hide and a pair of Yukaten shoes which I purchased this week also appear to have been produced from horse hide. And TimH, can I ask why you cannot get British horse hide for your production?
Sebago were offering some Horween leather Docksides
a couple of years ago but I'm not sure that there are any in their 2016 range!
needs more pictures, but a good read anyways.
Are you interested in something nasty like spoo poking?: https://webcache.googleusercontent.com/search?q=cache:wYYKqWROcXAJ:https://www.styleforum.net/threads/luxeswap-official-affiliate-thread.307841/page-1413+&cd=1&hl=en&ct=clnk&gl=ca
You must log in or register to reply here.
New posts