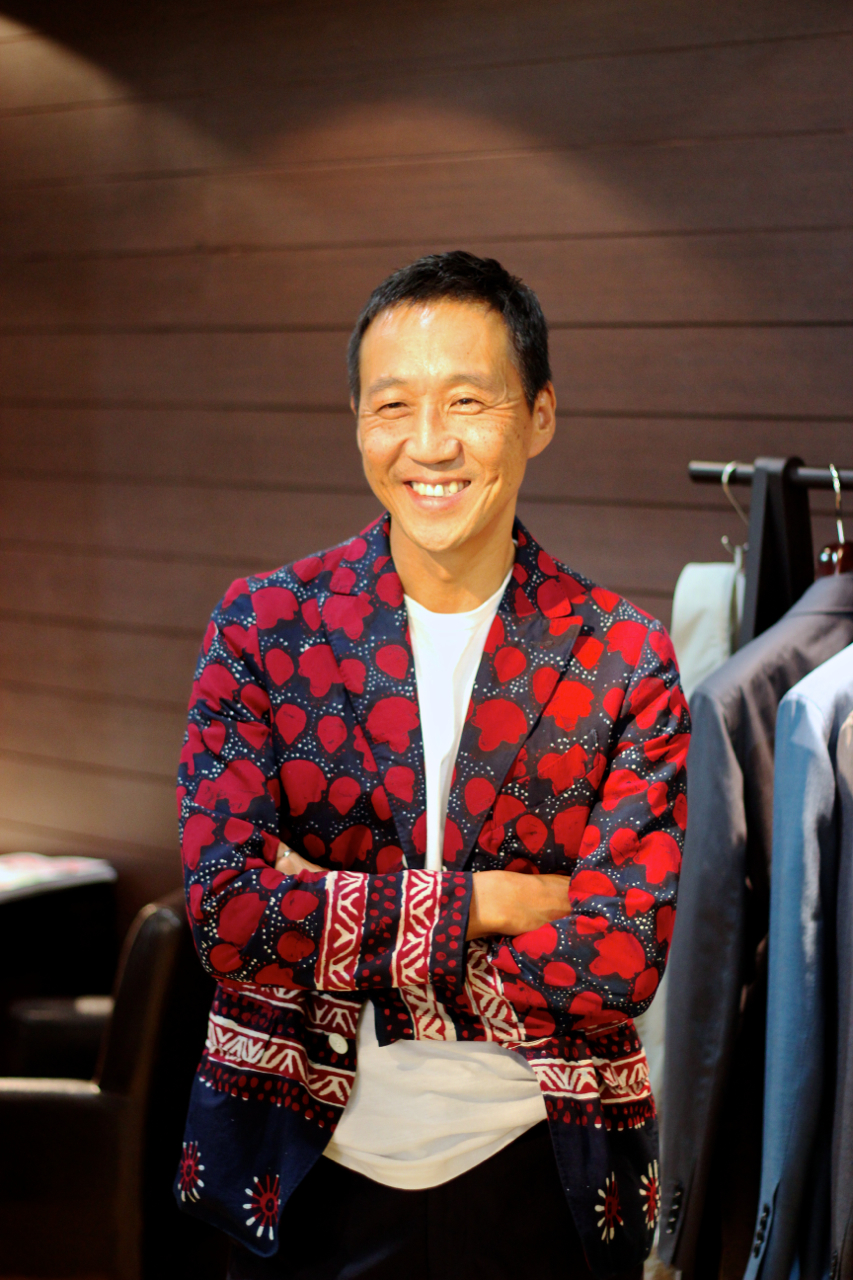 Among the legions of well-dressed men who attend the twice-yearly Pitti Uomo, Yasuto Kamoshita is a stand-out. He’s one of the founders of United Arrows, and in 2007 he started a smaller project, Camoshita, which he has referred to as an exercise in “Japanese Dandyism.” The brand is a blend of Italian tailoring, American tradition, and Japanese style - if that sounds like a lot to wrap your head around, don’t worry; Kamoshita’s main concern is that you look and feel good. Both he and Misato, his friend and interpreter, are thoroughly personable and intelligent people - and they were kind enough to sit down with David and Jasper for close to two hours of discussion during June's Pitti Uomo 86. This is the first installment; Part 2 will follow next week.

David: I noticed on the jacket that you’re wearing and on a couple of the Camoshita jackets from the S/S ‘14 season, the fabric isn’t a traditional glen plaid or check you might find for sport coats. How do design these fabrics that end up as jackets?

Kamoshita: I have a huge archive in my mind and experience of classic fabrics, which I then modernize or update. Those jackets you mentioned are based on madras fabric.

D: This shawl collared suit is interesting. How do you picture it being worn? As evening wear or office wear?

YK: Either. Nowadays it’s kind of the fashion to dress down formal items. So whereas previously you would only wear a tuxedo for a very formal occasion, this kind of suit you can wear with a t-shirt underneath.

D: Does it take a lot of trial and error when trying to modernize a classic before arriving at something you like?

YK: I start out with a strong vision in my head of what I want. Then it’s just a matter of turning that vision into reality.

D: The shoulder seam on the jacket angles backwards a lot - what is the purpose of that?

YK: It has to do with keeping the shoulder natural and following the slope of the shoulder.

D: Do you design with the Japanese physique in mind?

YK: We are a Japanese brand, so of course we began with the idea of selling to Japanese customers. But now that we are selling in other countries as well, I am considering creating another fit for customers with broader physiques.

D: I noticed sometimes you only button the bottom button - how did you start doing that?

YK: I love Fred Astaire’s style, and saw him wearing jackets in that style. For that reason also I have the buttons on my jackets a little bit higher, almost like a paddock jacket.

Jasper: Is there something about Japanese design in general or your design sense in particular that motivates your interest in American style?

YK: Japanese tailoring history was originally based on English tailoring. After WWII, Americans came to Japan and Japanese culture was heavily influenced by the American one. In the 60s and 70s, there was a lot of influence and interest in how Americans made and wore clothes. In the 80s Italian style started to gain influence, through United Arrows. I was a part of that and among the first wave of Japanese buyers to come to Pitti and bring brands like Attolini and Kiton to Japanese customers.

D: Was it someone else at United Arrows or you yourself that had the idea to come to Italy?

YK: I got culture shock the first time I saw Italian clothes, because I hadn’t seen that kind of tailored clothes. And I decided I wanted to wear Italian suits. Then United Arrows and I started to work together to bring Italy to Japan.

At the time there were Japanese buyers going to Armani and Versace and the big names like that, but I instead went to the small workshops, and found a lot more to like there. Twenty-five years ago when I was going to these places asking if I could buy from them, it was a strange thing. Now there are young Japanese people coming to Italy to try to learn how to make a Neapolitan jacket. But all that started with United Arrows going there to buy from them, and designing clothes with them.

D: Why do you think Neapolitan tailoring has been so successful in Japan? As you say, there is a kind of “culture shock”. Neapolitan tailoring tends to be softer, more rumpled, more casual, and the culture more chaotic and improvised. Whereas my impression of Japanese culture - at least business culture - is that it’s more buttoned-up and proper.

YK: It is true that Neapolitan tailoring is in a sense looser, but it’s also noble and sophisticated. And cool, in a way that I hadn’t seen yet. If something is good, it will be accepted anywhere.

D: The Emperor of Japan still wears English clothes. Is there a class difference in Japan that aligns with style in tailored clothing somehow?

YK: The Emperor has an old relationship with his tailor that I’m sure it would be difficult for him to break even if he wanted to. But it’s the older generation in general that still likes English tailoring, whereas the younger generation is the market for Camoshita.

D: Younger generation in the sense of the current descendants of the ancient upper class or families that have gotten rich since WWII?

YK: Certainly after WWII, many people were working very hard to rebuild the country and gain wealth. That work industrialized Japan, and made ‘Made in Japan’ into what it is today. But the old families that control the big conglomerates always had people who were fashion-conscious, and at that time they were influenced by the American style of companies like Brooks Brothers.

D: Why do you think that Japanese brands tend to make clothing more in the American or Italian style, rather than continuing to emulate the English style?

YK: After the war, Western dress, and Western culture in general, was more and more adopted. But it had to be learned - the indigenous Japanese style of the kimono is obviously very far from the Western suit. And what was around at that time to imitate was the American style, because they were in Japan. Then in the 80s when Japan was very wealthy, Japanese people started to travel more, and at that time gained more exposure to other styles such as Italian.

J: Often in a post-war culture, there is a progression from a focus on the military, to a focus on wealth, and then to arts and literature. Do Camoshita customers come more from any of those backgrounds than others?

YK: Our customers come from all different backgrounds. But a typical Japanese office worker, in fashion, is like a professional. Already they have their style. Japanese people in general are very fashion-conscious. I want those people to understand what Camoshita is doing, and also let the world know about Japanese style.

D: Do you think dressing in Japan is very competitive?

YK: Yes, very! Everyone wants to be better dressed than their friends.

J: ‘Made in Japan’ has become such an indicator of quality, and I’m sure being made in Japan makes Camoshita resonate with Japanese customers. Are there other ways you try to keep the brand close to home and recognized as a Japanese brand?

YK: I want to be proud of contributing to Japanese business - both in creating jobs in the manufacturing of the clothes, and in showing the world the attention to detail that Japanese workers have. There are some things that Italian workers maybe do better, and maybe an American designer wants things to be made in America, but as a Japanese person, I would never want to produce anywhere but Japan. It’s where the heart is for me. And I think Japanese consumers appreciate that.