New posts
Question (with a bit of an instructional included, from @nbj08 ): I've recently acquired a pair of shell cordovan AE Dalton boots secondhand, and it seems the previous owner used some sort of polish or cream. The effects were as expected - the beautiful shell luster was replaced with a thick, cloudy, and tacky residue. Here are how they looked upon receipt: 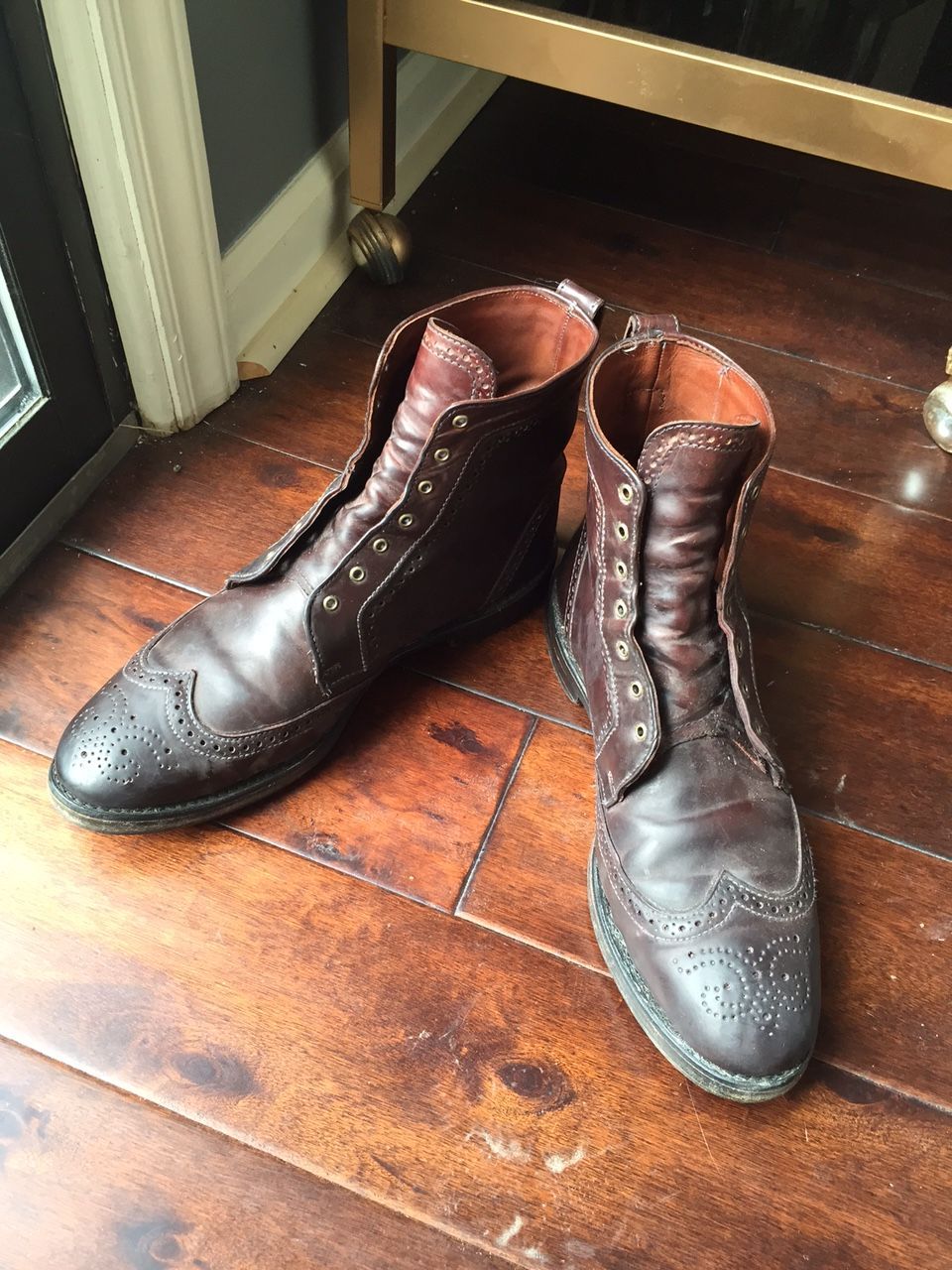 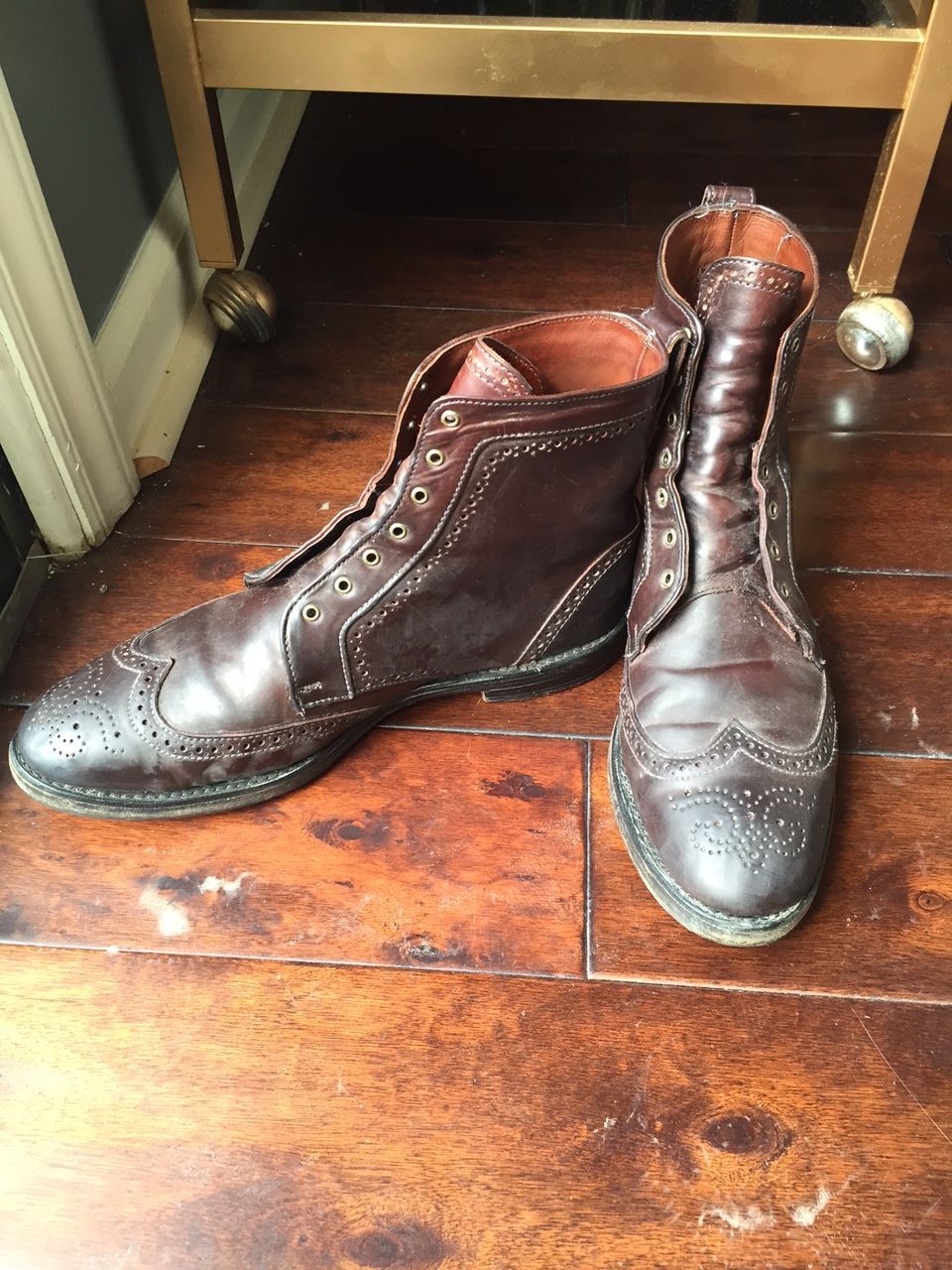 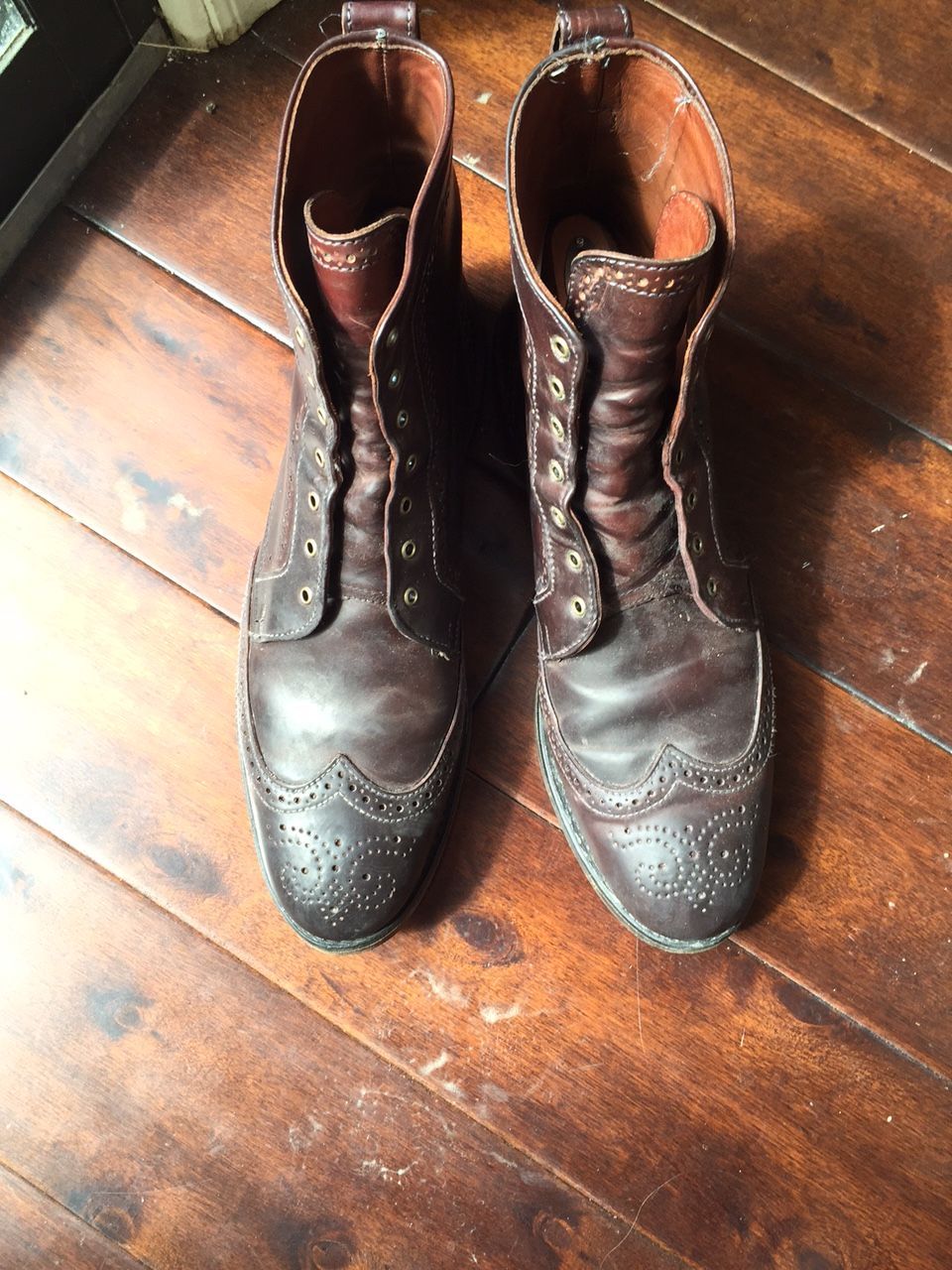 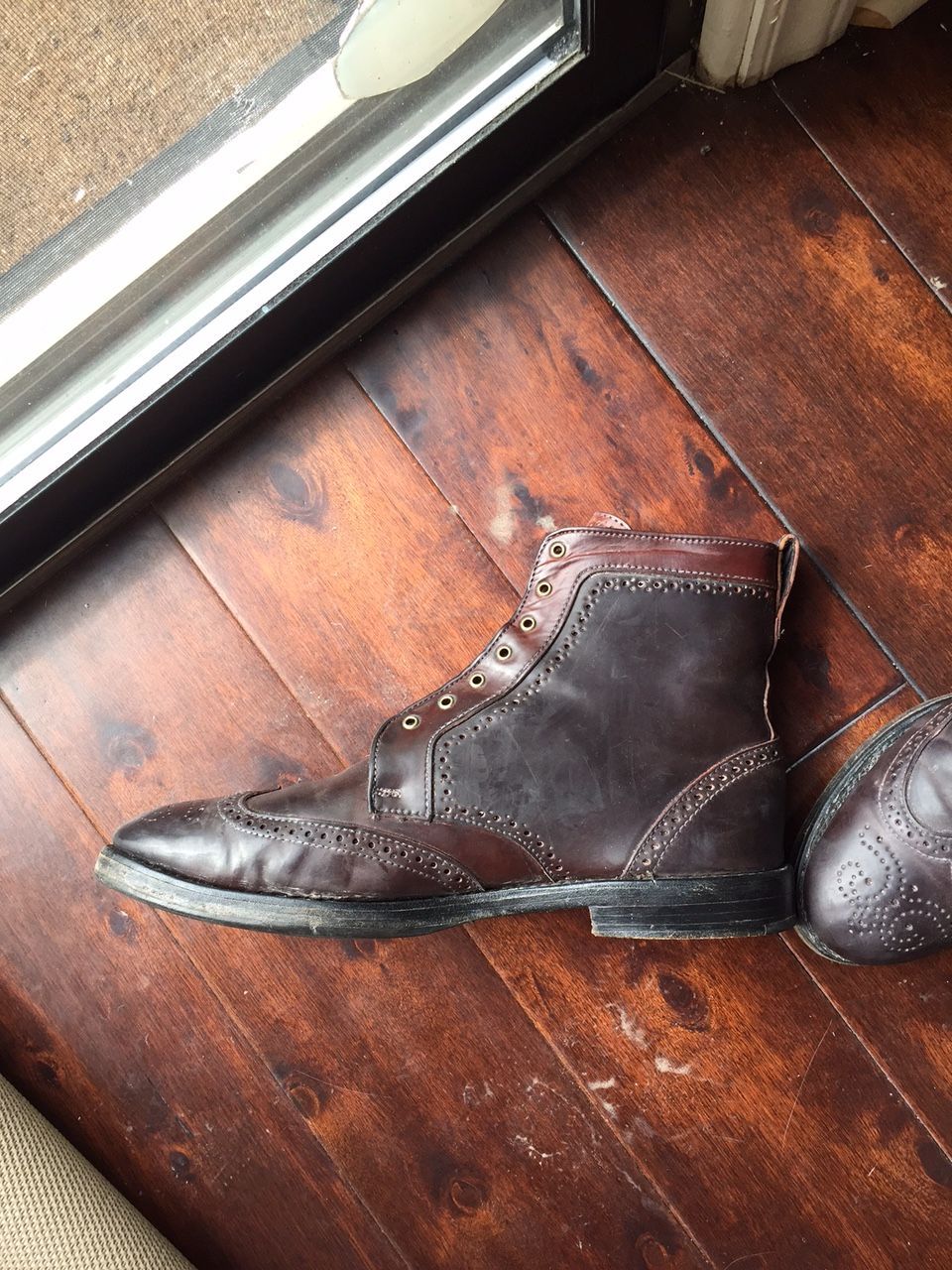 After cleaning with a damp rag and giving an initial brush, I went after the boots with some Saphir Renovateur. Two and a half gunked-filled rags and a few hours of brushing later, they are markedly improved. But there is still a long ways to go: 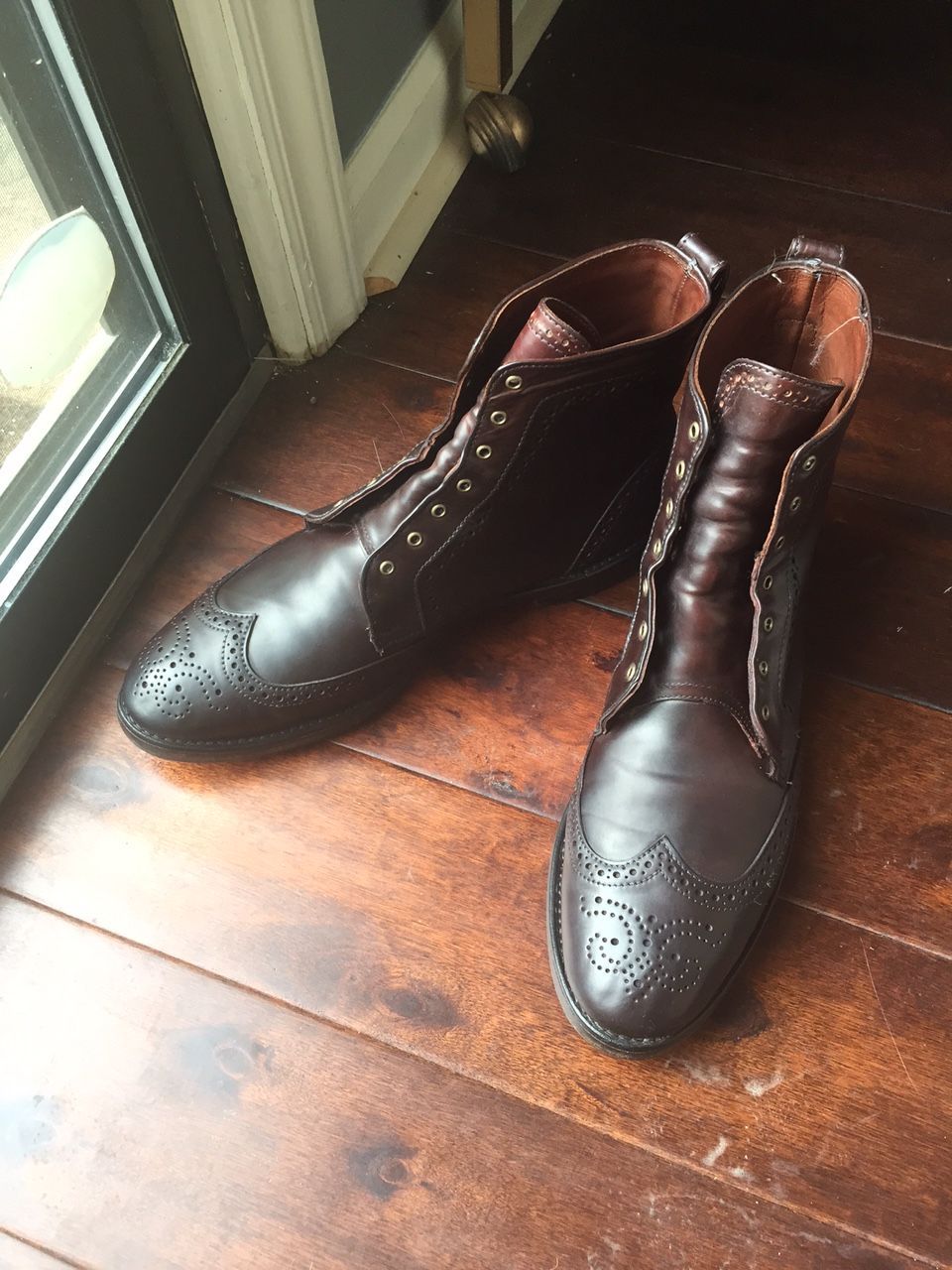 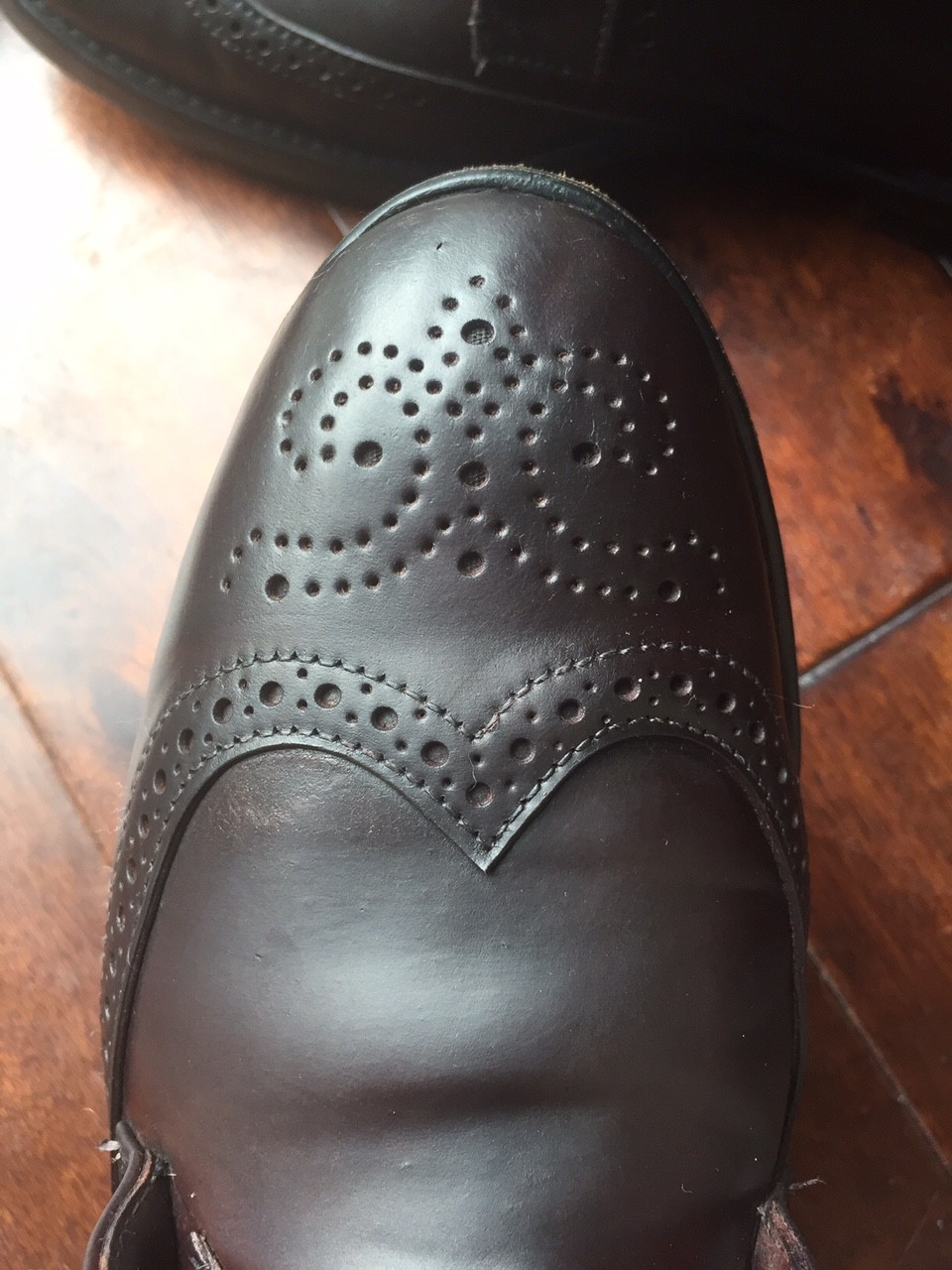 As you can see, the beautiful luster is still covered by waxy, hazy, cloudy, and tacky to the touch residue. To demonstrate even further, here are two more pictures. The first is a side shot immediately after some vigorous brushing: 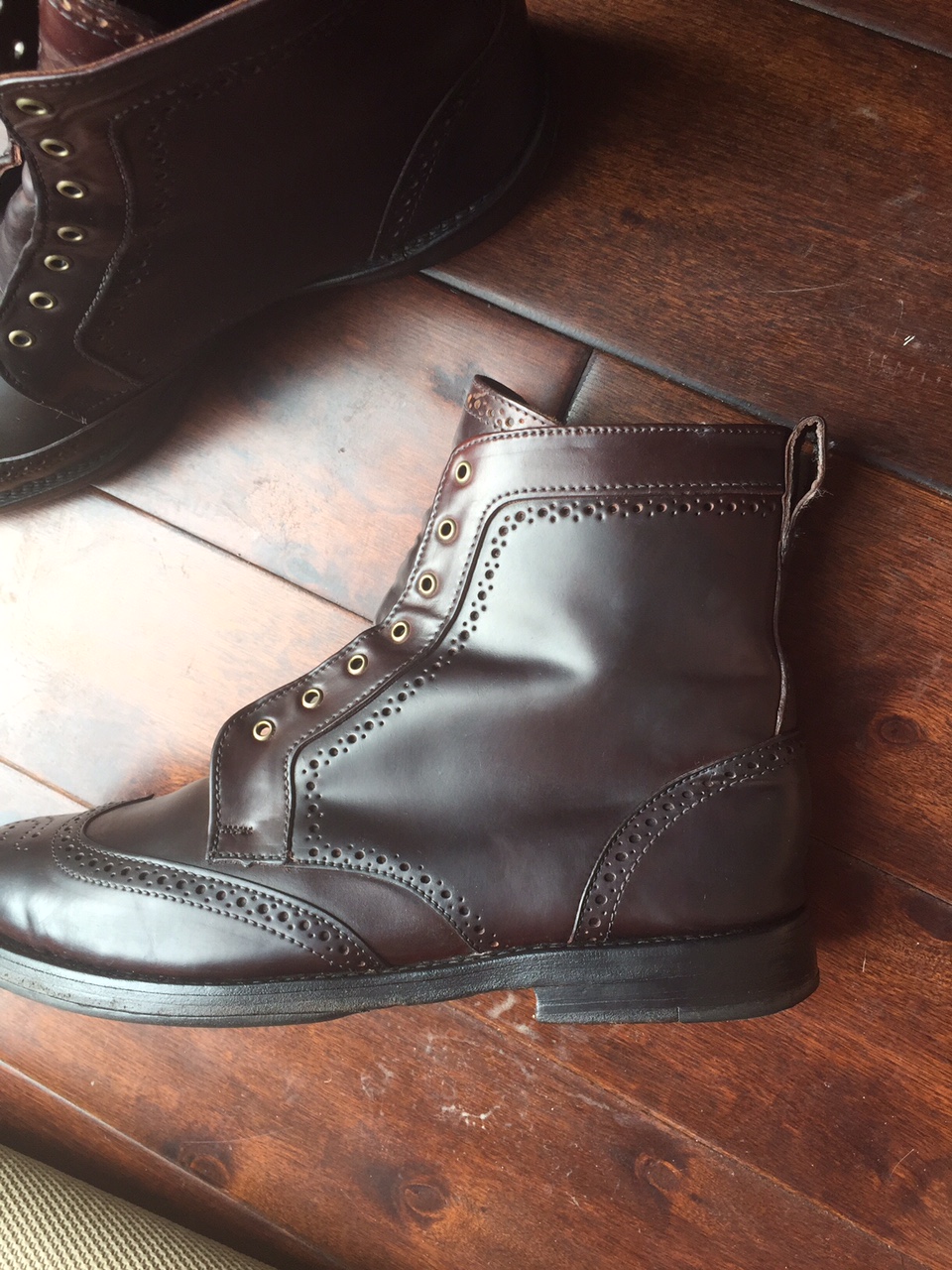 Now, the same side, after merely brushing my fingers from top to bottom: The cloudy residue of whatever it is that the previous owner put on these boots is clearly seen.

So now, I come here looking for advice on what to do next. Are there any other similar experiences by fellow members? Does anyone have any suggested product (perhaps less expensive and more effective than Renovateur)?

Answer 1 (from @Fred G. Unn ): First off, I'm not sure you should even be using Renovateur on shell. If you need to strip off whatever the previous owner did to them you should use Renomat, which is a cleaner, rather than Renovateur, which is primarily a conditioner. "Two and a half gunked-filled rags" sounds like you are using waaayy too much product anyway, unless that's all product from the previous owner being removed.

Answer 2 (from @peppercorn78 ) : Personally, I would just start wearing regularly with normal brush/buff regimen after wearing. After a while, they'll start to come around.

They already look much better as is. I think others may have a point about the leather not being dry yet. My color 8 Bradley's looked like that immediately after getting a lexol treatment.

I have a few Shells and love them. The best thing to do is start wearing them often and you will see the the rich burgundy come out nicely, specially with the shoe molding to your feet. You have about 6 months if you wear these 2-3 times a week. Good luck
Its been my experience that all conditioners leave shell tacky to some extent right after application/brushing, and will leave those marks if you pass your fingers over the shell. AE cordovan cream, which does an excellent job of putting a luster on shell, in particular is quite sticky. It goes away with time. Just wait until the next day and rebrush. It may take a few days of waiting/brushing, but they will be fine.
#purplegains
Very late comment, but I find the best way to tackle dull shell cordovan is through the use of time and a few products. Saphir Renomat is the first product shell should be hit with. It may take one, two or three uses to really cut the wax/cream build up. After each use of Renomat, Renovateur should be used followed by a hefty brushing. Brush, brush, brush, brush, then brush some more until your shoulders and arms give out. Finally, wear the shoes as often as possible to let the elements working.
Looking for Spier & Mackay green cotton dress trousers (SS/2019) in 34/35 Contemporary + cigar linen dress trousers (SS/2019) in 34/35 Contemporary -- PM me

You must log in or register to reply here.
New posts