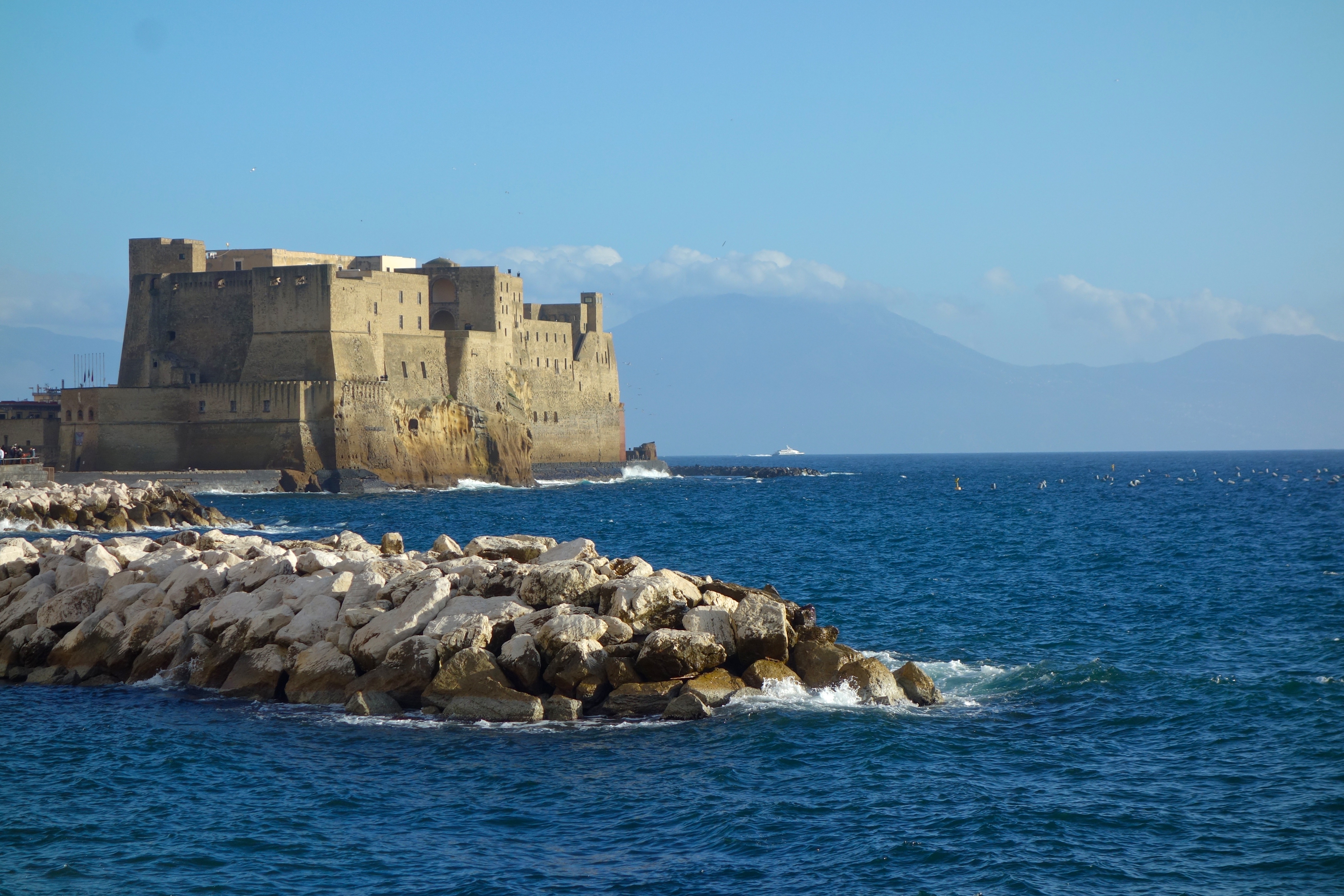 One of Naples’ many slogans is “Vedi Napoli e poi muori” - “See Naples and then die.” It dates back at least to Goethe, who mentions this popular saying in his Italian Journey. It captures the Neapolitans’ justified sense of their city’s unique beauty and culture - something everyone should see for themselves before they die. But there’s another reading of this sentence that captures how some outsiders view Naples - that you might not survive your visit. Well, I have been many times and lived to tell the tale. So here it is - the short version, at least. 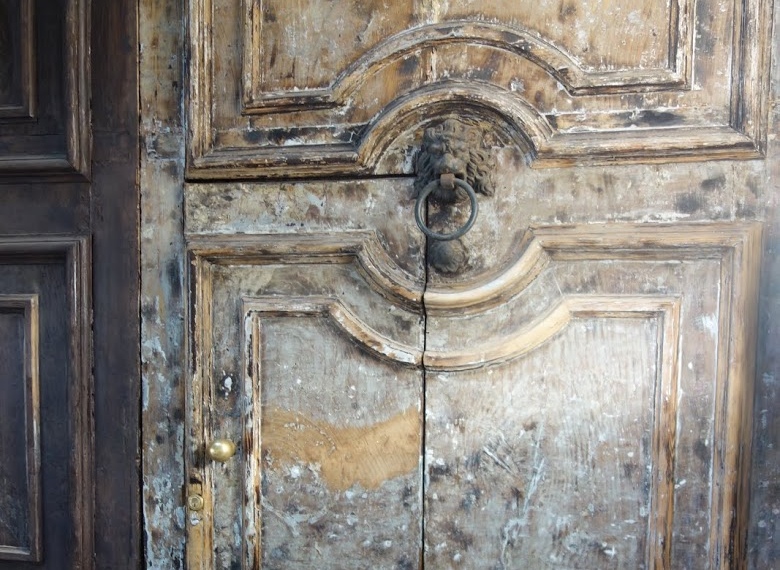 Like Rome and Istanbul, Naples is a palimpsest, one era of humanity superimposed over another. Construction on the new subway station near the Castel Nuovo (the “New Castle” - completed in 1282 A.D.) proceeds at fits and starts because workers keep discovering ruins of historical importance.

Retracing this history from the very beginning would mean visiting the Greek ruins at Cumae and Paestum - Naples (“Nea polis”, “new city” in Greek) began as a Greek settlement. But like the rest of the Italian peninsula, eventually it was subsumed into the Roman Empire, the LVMH of its time. Visiting this era requires only a ride on the Circumvesuviana to Pompeii, the Roman town at once destroyed and preserved by the eruption of Vesuvius in 79 AD.

By the time Pompeii was rediscovered in the 18th century, Naples was one of the great cultural capitals of Europe. You can see evidence of this importance at every corner: in the Caravaggio paintings in Naples, the most spectacular of which is his “Seven Acts of Mercy” in the church of Pio Monte della Misericordia, tucked inside the historical district; and at the Teatro di San Carlo, where Rossini composed for a few years in the 19th century until he ran off with the opera director’s wife, and where you can still see opera. The inside is gorgeous, and the crowd is mostly well-positioned locals, a congregation you don't see all that often as a tourist.

Naples’ peculiar artistic and scientific ingenuity reach their greatest heights in the Capella di Sansevero, the family chapel of the di Sangro clan, also in the historical district. It contains the haunting marble sculpture Cristo Velato (“Veiled Christ”), commissioned by Raimondo di Sangro. The veil over the body was so convincing that visitors accused Raimondo, a famed scientist, of teaching the artist an alchemy that could transform a real veil into marble. These accusations were false, of course. The invention of technology that could turn cloth into marble would have to wait until Huntsman did it, as every Neapolitan tailor knows.

Underneath Naples lies a parallel history. The city was built using volcanic rock from beneath its own ground, creating a series of tunnels. These tunnels hid early Christians from Roman persecution, and nearly two thousand years later, protected Neapolitans from Allied bombs in World War II. The survivors later forced occupying Nazi troops from the city in the “Four Days of Naples,” perhaps the proudest moment of modern Neapolitan history. You can visit these tunnels today on a Napoli Sottoterranea (“Naples Underground”) tour.

What to Wear and What to Buy 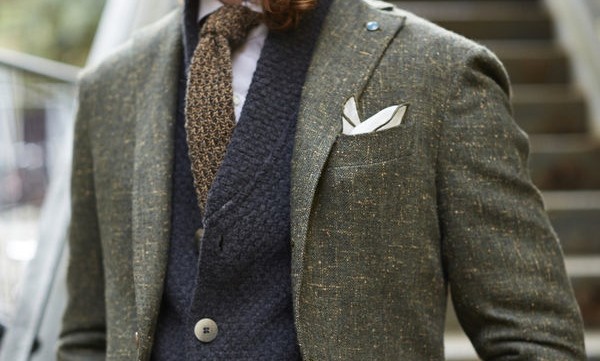 You may have lofty dreams of strolling around Naples through crowds of bespoke suits, winning an approving nod from a gentleman here and a dandy there. Certainly you will see some well-dressed men in Naples, but it is not the sartorial paradise that you have imagined. If you want to watch other tourists show off for indifferent locals, sit down for a coffee at Gambrinus.

If you want to see and discuss beautiful Neapolitan clothing, you will have to go where they are sold - at the sartorie and the shops that support them. The sartoria is too rich a topic to treat here, so I will leave it to a future article - you’ll need a few days’ stay to have a suit made anyway. But here’s a trail for the ambitious clothes horse to gallop through:

Start at Rubinacci, in a historic palace up the hill from Piazza dei Martiri. There you can see some of their fabric stock, as well as their accessories and ready-to-wear clothes. If you’re lucky, maybe you’ll catch Mariano. Head West on Via dei Mille. On your left you’ll see Magnifique, which usually has some attractive lengths of fabric in the window. After a couple blocks, you’ll pass Brunello Cucinelli. At this corner, turn left onto the dead-end street with the gate at the end of it. If it’s during business hours, this gate will be open and you can walk through it, down the concrete staircase, and into the courtyard where you’ll find the E.G. Cappelli shop. Ring the doorbell and Patrizio will show you his tie selection. When you’re done there, exit the side of the courtyard opposite from where you entered. Keep heading downhill towards the water until you see the park and the water in front of you. Here, turn left onto Via Riviera di Chiaia and walk until you see E. Marinella on your left. Be careful, if you blink you’ll miss it. If you can’t see the Mediterranean on your right anymore you’ve gone too far.

If you’re still got an appetite, take a cab to Gambrinus. Walk north up via Toledo, stopping at Gay-Odin for some chocolate. Keep walking another 500 meters until you see the window for Talarico umbrellas on your left. If you see H&M, you’ve gone too far. Go up the side street next to the window and you’ll get to the Talarico workshop, a tiny cubby of craftsmanship. From Talarico, walk East a few blocks on Via Armando Diaz, then take a right on Via Medina and walk a few more to M. Cilento, where you’ll find Naples’ finest selection of gloves, shoes, jackets, and all the rest. From there, hoof it another kilometer up Corso Umberto to Caccioppoli, where you can browse through three floors worth of fabrics. If, after that, you still thirst for more clothes to ogle…come back to Styleforum for more recommendations and pictures.

I’ve stayed at Hotel Majestic and Palazzo Alabardieri in the Chiaia district. Both are comfortable - the Majestic is bigger while the Alabardieri is smaller with a more boutique feel.

But I prefer to stay at private apartments. You can find plenty on Airbnb or homeaway.it. If you have a big group, I particularly recommend this one. You’ll probably want to stay in Chiaia (South of Via dei Mille, West of Piazza dei Martiri, East of Via San Pasquale, closest to the most important sartorial destinations), on the waterfront (for the view), or around Teatro San Carlo (closest to the historical areas of the city). You would have to try very hard indeed to eat poorly in Naples. Even the really touristy places on the water aren't bad. You'll see the same menu everywhere - pizza, mozzarella di bufala, spaghetti con vongole - and it's all good.

There are a couple of places in particular that I would recommend, however. One is 'Ntretella. The easiest way to get there is to walk alone via Chiaia until you see a big sign for a pizzeria called Brandi. (This pizzeria is old and holds a likely spurious claim to having invented the pizza margherita. Their pizza is good but not exceptional.) From Brandi, take the steps leading up the hill, and at the first corner you'll find 'Ntretella. It's a seafood restaurant, run by a kind couple named Marina and Gennaro. You will need no menu; just let them feed you.

The other spot that is worth a special visit is Pizzeria Sorbillo. Every Neapolitan has a favorite pizzeria, and will argue its merits for hours. Anyway, this one is my favorite. It's in the middle of the historic district (there's also an outpost by the water, but it's not quite as good, although a significantly more comfortable experience), and makes a good lunch break between visiting churches. It can get dauntingly crowded, so best to arrive early. Even so you'll probably have to give your name and wait in the street dodging taxicabs until they call you on the loudspeaker. Don’t screw around with any of the fancy toppings - just order a pizza margherita.

If you’ve got a lot of time and energy, go to Trattoria Nennella, in the Spanish Quarter. It’s loud and crowded - you'll probably wait quite a while to get a table, unless you go early, around 7 - but cheap and good. The menu has maybe ten items total. Expect some good-natured haranguing from the wait staff.

If you want to try something different, go to Mu, in Chiaia. Every dish they make, from fish to desserts, uses mozzarella. You’d be surprised how good it is.

Naples is such a fascinating and intricate place I can't possibly hope to do it justice in a few paragraphs, but with these few nudges I’m sure you will be off on your own direction in no time and finding things to recommend to me for my next visit.

My final piece of advice is not to be too scared. Sure, keep your expensive watch locked up at home. Don’t wander around alone at night too much. But within Chiaia and the Historical District, let your curiosity lead you. You’ll probably survive. And if not, at least you got to see Naples.

My younger brother studied in Naples for a year, and we have since become friends with his host family, whom we've visited a few times. Your write-up is great, even for someone who is familiar with Naples. Thanks!

Photos from my last trip to Naples are available in this album: https://www.flickr.com/photos/kaxixi7/sets/72157650149110002/ (Apologies in advance for the large number of photos of me and my brother. Gotta keep the grandparents happy.)
Thank you for the article. Naples is such a magic city...
http://amarezzahi.tumblr.com/

http://www.zampadigallina.com - Tutto Fatto a Napoli -
Going to do this for any other places?
Nice write up. Great city. That's why we make our shoes there!
Paul Evans Luxury Men's Footwear
Made in Italy. Designed in New York. Step up your shoe game.
Shop exclusively at www.paulevansny.com.
Connect with us on Instagram and Facebook.​
On a negative note, don't stay at the Hotels Miramare. I spent four days there in
Spetember 2014. The breakfast was spectacular featuring some delicious local
specialties. The staff were accommodating,though not proactive. The owner's
Sky terrier lent a homey note. But my toilet had to be "fixed" six times and I was
encouraged to take a private tour with someone who didn't know the difference
between Gothic and Romanesque.