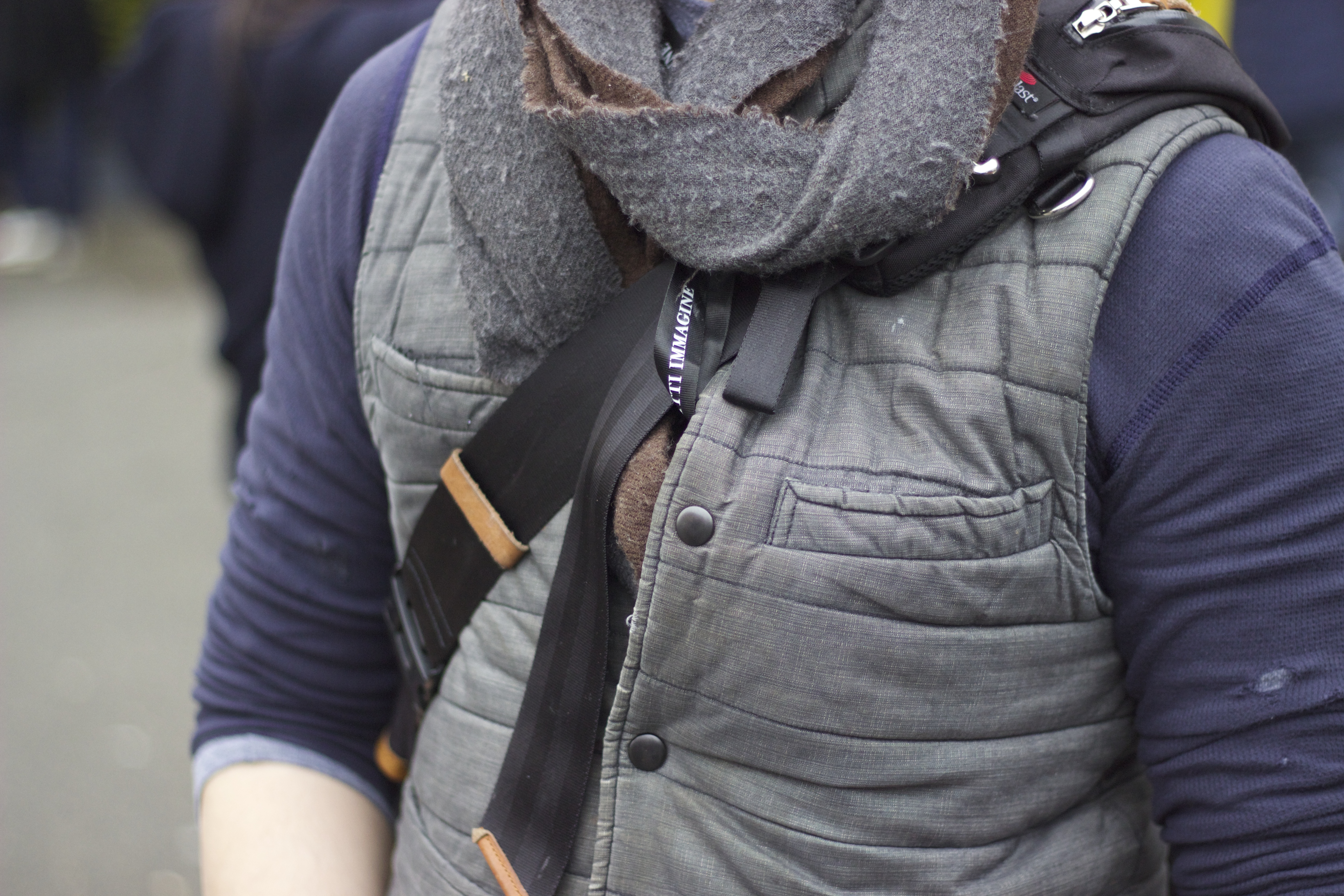 If you live somewhere where seasons exist, March weather can pose a dilemma. Most stores don’t have all their spring clothing in stock yet, and in any case, a spring jacket may seem a bit premature. Enter the lightly quilted jacket or vest. Usually used as a middle layer in the dead of winter, come early spring, these make a great piece to throw over a shirt or cardigan on a cool, fresh day. The light batting in between the inner and outer layers traps warmth, and the tightly woven outer layer keeps out wind. They are lightweight and compact, not ponderous like a winter jacket or coat. And they are easy to stuff into your bag, so that you can fish it out when the sun starts to set.

Unsurprisingly, the quilted jacket was first made popular in England, where the weather is often inclement, even in summer, but where truly bone-chilling cold is relatively uncommon. More surprising is that fact that the original quilted jacket was created by an American, Steven Guylas, an anglophile who made the jacket in America and brought it over to England, where it flourished, and became associated with the English Gentry. Steve Guylas did not establish his company (now owned by an Italian parent) until 1965, at which time he started Husky, a company that most North Americans under fifty know only as one of those mysterious brands that you find on Yoox. We associate the quilted jacket with the Royal family - and particular Queen Elizabeth - and traditional hunting gear, and all things English and horsey, but it’s actually a fairly recent development, and only really became popular in the 70s and the 80s.

While the Husky brand seems to have fallen into relative obscurity, quilted jackets and vests became a mainstay in our casual wardrobes. “Very British” companies like Barbour, Mackintosh and Lavenham make the best-known versions, often with a cotton outer surface, but also using hearty tweeds and other sturdy, outerwear-appropriate wools. Most of the Italian versions that I have seen have a more luxurious feel. Always willing to turn the dial to eleven, Brunello Cucinelli will sell you a goose down-filled, cashmere quilted vest for about $2000-$2500, on any given FW season.

For my own personal use, I prefer the vest form of this garment, and I like something without much batting. It’s much more stylish than most fleece vests, but serves the same purpose. As with many things English and American, like jeans and hunting jackets, Japanese designer Tajuki Suzuki of ts(S) takes the quilted vest to the nth level, and uses a familiar shape as a canvas on which to showcase novel and interesting fabrics. For the FW14-15 season, the vest was available in both a vertically quilted herringbone cotton fabric and a high density nylon vest. As winter gives way to spring, the quilted vest will continue to serve. If you are concerned with getting the most bang for your buck, there are not too many outerwear pieces that you can wear for three seasons.

would be nice to include brand/model details or link of vest in photo pls
That is a chambray shawl collared vest from Wings+Horns from waaaay back in the day, like, 2011. I wear it all the time. Wings+Horns makes different versions every year. That was the vest that got me into vests.
"Blue Denim in their Veins"

Follow the Styleforum tumblr
Like our Styleforum facebook page
Follow the Styleforum twitter feed
Follow our Instagram
Visit
​
yeah any recommended vests would be dope.
I really like the Ts(S) vests, either the reversible model (this year, poly taffeta on one side, and stretch denim on the other) or the button up vertically quilted one made of chambray. Herno always does some good ones if you like that lux Italian look. And of course, companies like Penfield always do good, very :American" versions. If you want to go full horsey, Husky or Lavenham are good, like I said. if you want to go goth ninja or tech ninja, there are a lot of option as well.
"Blue Denim in their Veins"

Can SF please do a style guide for somewhere where seasons don't exist? My Tommy Bahama shirts can only get so much wear.
Quote tagutcow:
the poasters who are a drain on my spirit tend to be the poasters whose entire involvement with SF is an extended, surreptitious attempt to impress strangers on the internet.
Capobianco makes something similar. I have one if somebody's interested
Bely Cia, a 100+ year old menswear store in Barcelona makes, in-house, one of the nicest quilted vests from premium wools in earth tone tweeds.
Follow me on Instagram
Love this pic.
Just as unrestricted questioning is our capacity for self-transcendence, so being in love in an unrestricted fashion is the proper fulfillment of that capacity. – Bernard Lonergan, S.J.
You must log in or register to reply here.
New posts