Fall Styles for the Tailored Man

I’m supposed to tell you about fall clothing. Specifically, according to my brave editor, “what works, what doesn’t, how to impress everyone, etc.” I presume I am expected to deliver encomia to tweed, madder, suede, flannel, and so on. Basically, like Phyllis reciting the rain cliches, except for fall instead of rain. As if this is the first coming of fall and nobody knows what in the hell to wear.

But the thing is, I do like fall. In my hometown of Washington, DC, the arrival of fall means that I don’t have to feel like I’m walking straight into Jabba the Hutt’s musty butthole every time I go outside. It’s pretty much my favorite season - it’s like summer and winter mixed, bred for its jewel tones and wooly textures. And I’m not the only one who loves fall - putting fall first gives me at least half of a something in common with Style Girlfriend, whose favorite season is an absolutely adorable tie between fall and spring. (We also share a determination not to run a marathon. So much in common, really.)

Writing about fall feels like how Mary McCarthy described writing about Venice - it’s gorgeous, but there's nothing new to say about it. There’s nowhere Mr. Autumn Man hasn’t already been.

And yet I still have 600 more words to write. So here we go, following in the leaf-crunching footsteps of Mr. Autumn Man:

Look around you at the colors of the falling leaves and late flowers. Those are the colors to wear. You probably work in a heated office building and put on an overcoat when you go outside. Nevertheless you are expected to wear warmer clothing. Even things that provide no warmth at all should be of heavier fabrics - wool ties instead of silk, silk pocket squares instead of linen or cotton. Boots. Suede. Pebble grain. Cordovan. All these things work in fall. Try them. Wear them. But in the words of George Orwell, break any of these rules rather than wear anything outright barbarous. This is also the time of the year to take pics of yourself snowboarding in a suit. 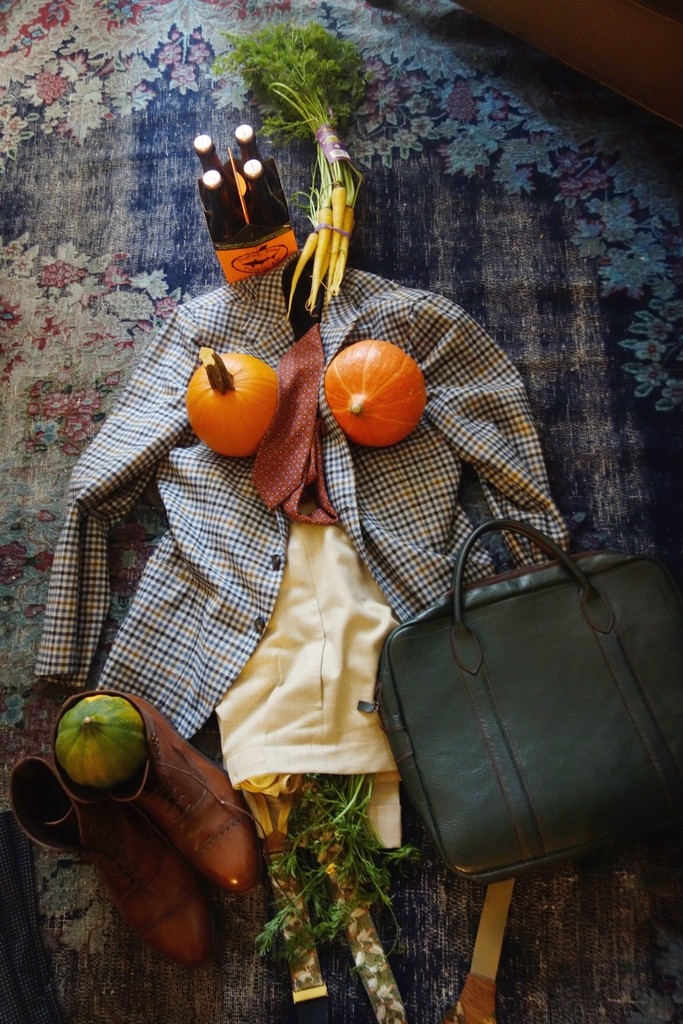 I do not recommend swimwear worn outside of an indoor pool setting in fall. If you were thinking of just wearing a wifebeater under your sport coat with no shirt, be aware that this is not seasonally appropriate. Similarly, short sleeved jackets and open-toed wingtips should not be worn after Labor Day.

Ketchup and mustard stains are a charming decoration for linen pants, but are generally discouraged for flannel pants, since flannel would be too hot for summer barbecues. Ketchup stains on flannel therefore suggests that you boiled yourself Oscar Meyers for dinner at home on a wintry evening, which is not gentlemanly. Appropriate stains for flannel pants include beef stew, applesauce, and Oktoberfest beer.

Finally, there are a few things that seem like they should work, but don’t. For instance, tweed boxer-and-sock sets. Too matchy-matchy. Likewise, you might think it’s clever to use an actual autumn leaf as either a pocket square or boutonniere. Be careful with this. I left one leaf in a breast pocket and came back later to find an entire caterpillar colony. Also, spaghetti squash makes a nice wig, but it won’t last past lunch time. 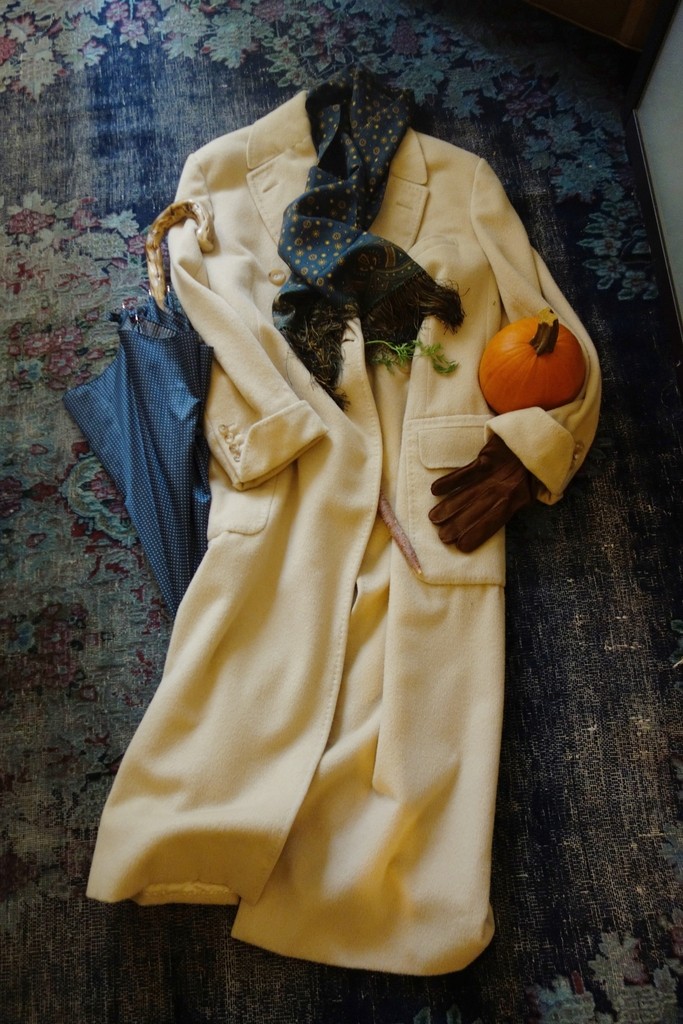 How to Impress Everyone

Codpieces are back in for fall. For extra seasonal flair, I have mine made from dried gourds. You just have to look around for shapes that you like. Don’t be afraid to experiment. It’s tempting to just stick with the standard bowling pin style, but try mixing it up with the occasional figure eight or flamingo.

Another seasonal touch that is sure to impress everyone is to switch out your briefcase for a carved pumpkin. These are fun to do yourself, which allows you to get creative with your carving design. :foo:? We can discuss that at this time. Donald Trump wearing a sombrero? Make America great again. One pumpkin at a time. Just be sure to attach a high quality leather handle to the top so that a nice patina can develop over the course of the season.

Or, if fall clothing is so difficult for you to master that you’d rather sit this season out, just stay home. It will probably rain a lot, and that’s great for staying home, curling up with a book and reading all day. 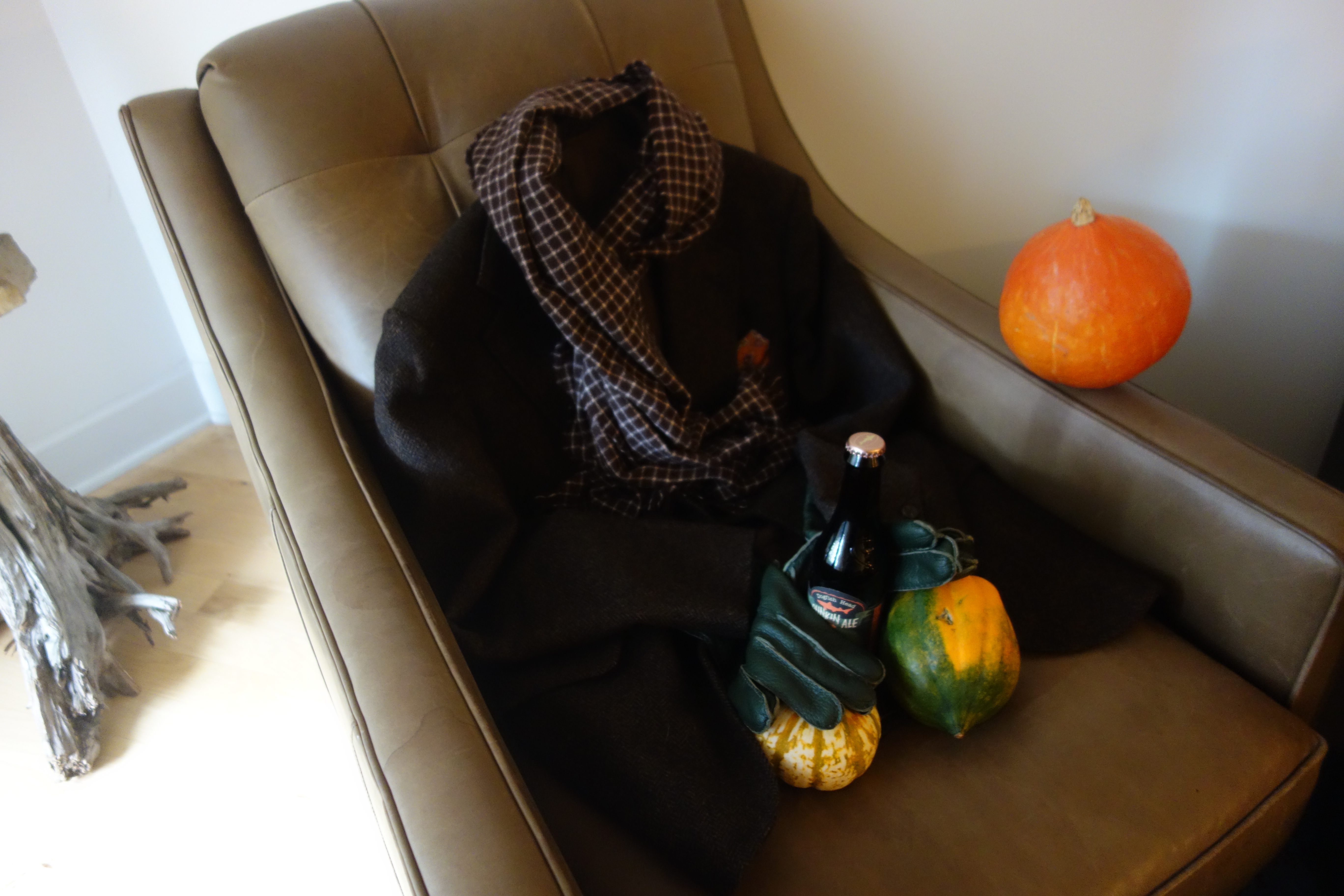