New posts
Jasper asked me to choose 15 personal favourites from among the many street style looks Erica and I photographed during Pitti Uomo 89. Trust me, this wasn't an easy task. I had to make some sort of cut, but if you asked me tomorrow, I might differently. There were quite a few looks that I really loved from this last Pitti, and in the end I had to go with my gut reaction when choosing these 15 pictures. In no particular order, here are my 15 favourites: 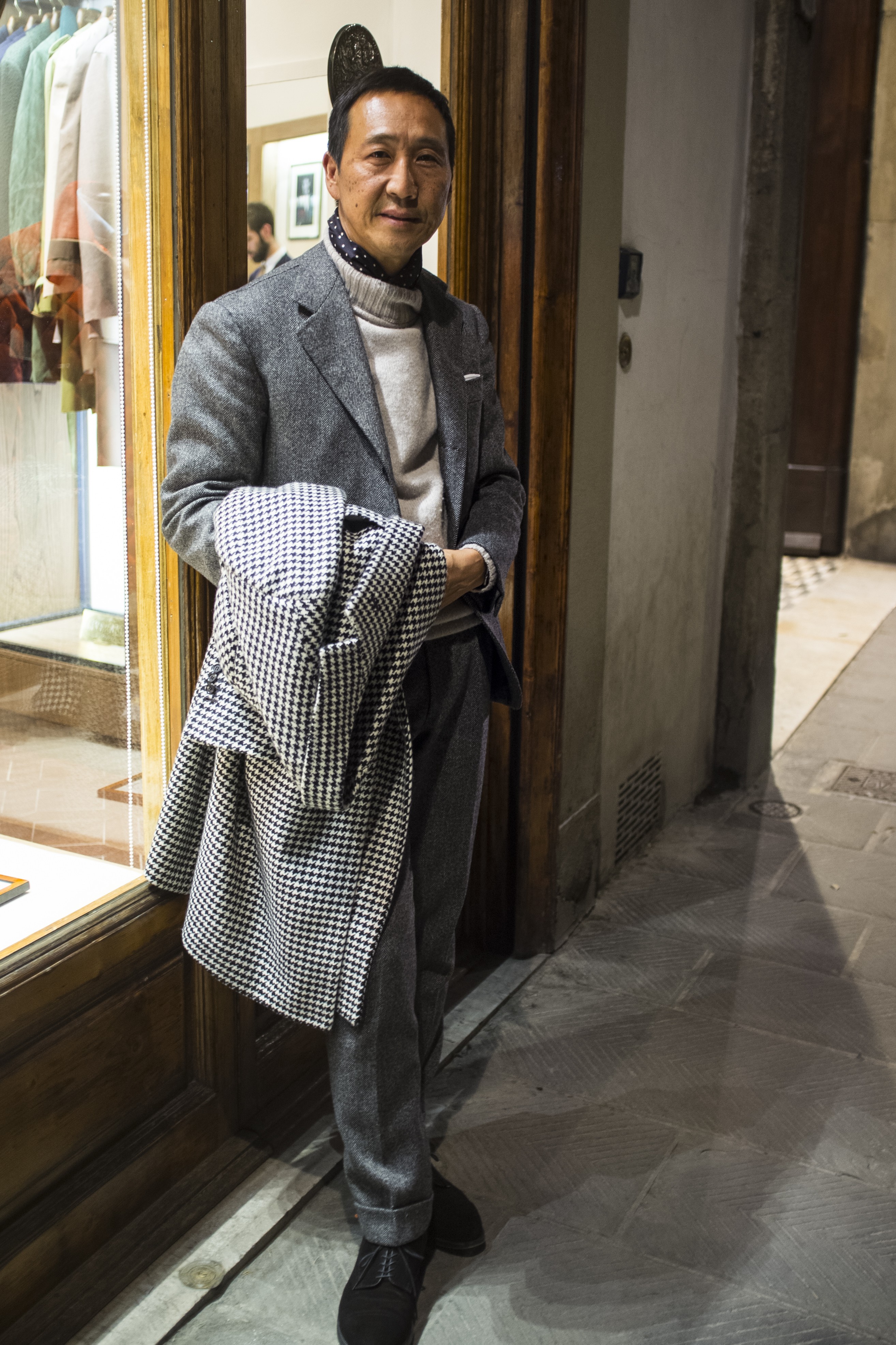 As one of the founders of United Arrows, it's no wonder Kamoshita gets a lot of attention. He has become something of a #menswear demi-god, surprisingly for being not-particularly-peacock-ish. I think this picture speaks volumes about what makes Kamoshita such a well dressed man. Understated colours in gray, brown and beige, but with some amount of personal flair - in this case, a nice navy scarf. One of the young guns of the Armoury NY, Jake is the kind of guy you can't help but see all over the internet (or at least the places of the internet where menswear is featured). Also, we couldn't help but run into him at every turn we took in Florence. We kept bumping into him at every shop, restaurant and street we walked. So, when I spotted him in this great yet understated suit, from what I can only guess is Liverano, I had to take a picture. I know that wearing a DB open will probably make a lot of you cringe, but as you can probably figure out, it fit perfectly when buttoned up. 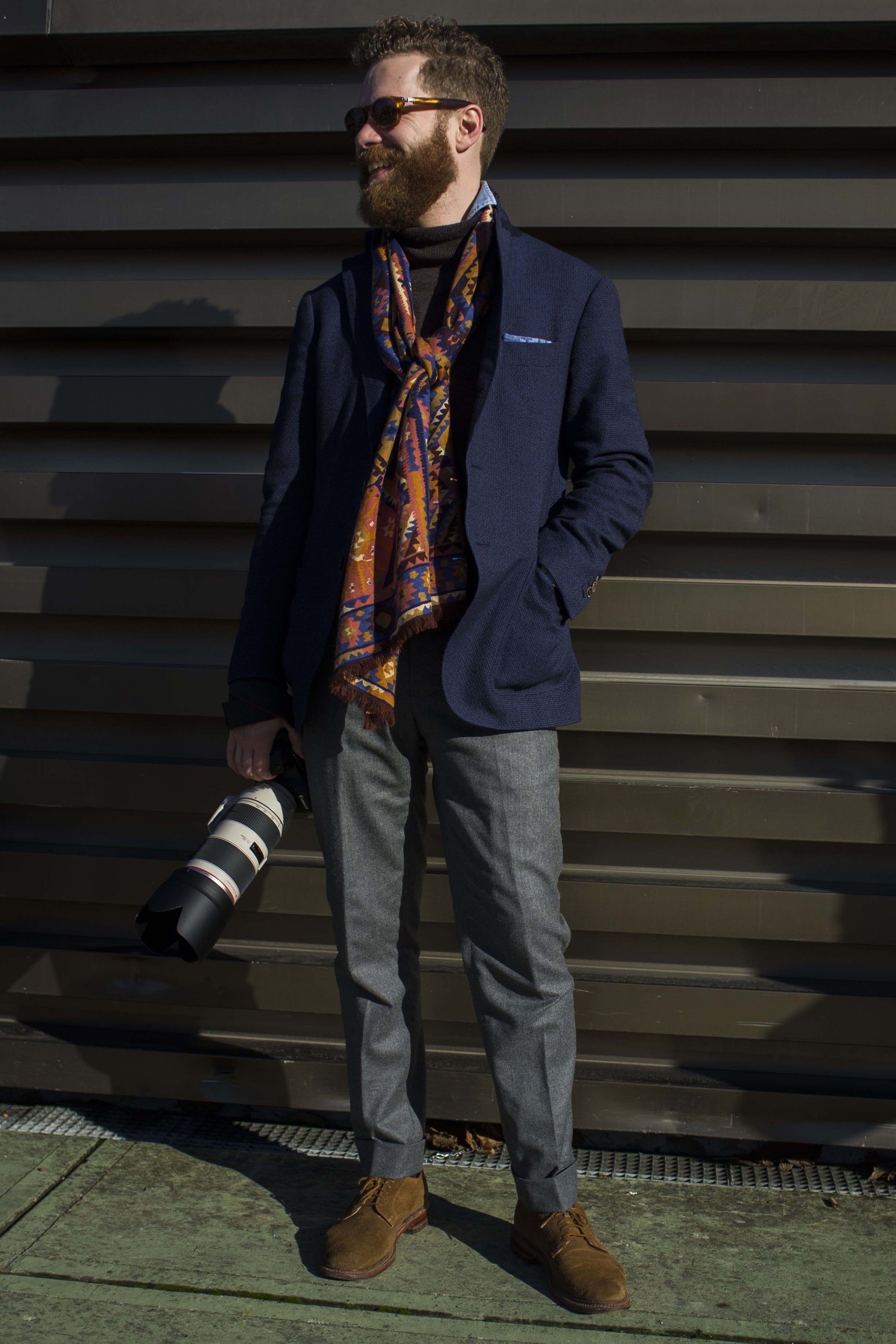 One of my absolute favourite photographers. Jamie is the guy responsible for those super scrumptious pictures from Drake´s . In fact, he´s responsible for a lot of the photography they´ve used in their marketing, since he´s been their in-house photographer. I always love meeting Jamie, because beside being a very talented photographer, he´s also a great guy. He´s low key and humble, something I think is reflected in the way he dresses. We met this man for the first time during this Pitti. A Spanish Citizen of French descent, he is a very active member of the French equivalent of Styleforum, De Pied en Cap. A very amiable man, with whom we spent the last evening in Florence, having drinks at Four Seasons and pizza at Mr Pizza's. I really liked this suit (that looked even better IRL). It's a 3-piece green tweed with red overchecks. Very subtle for being Pitti - I guess you can start to see the pattern here. 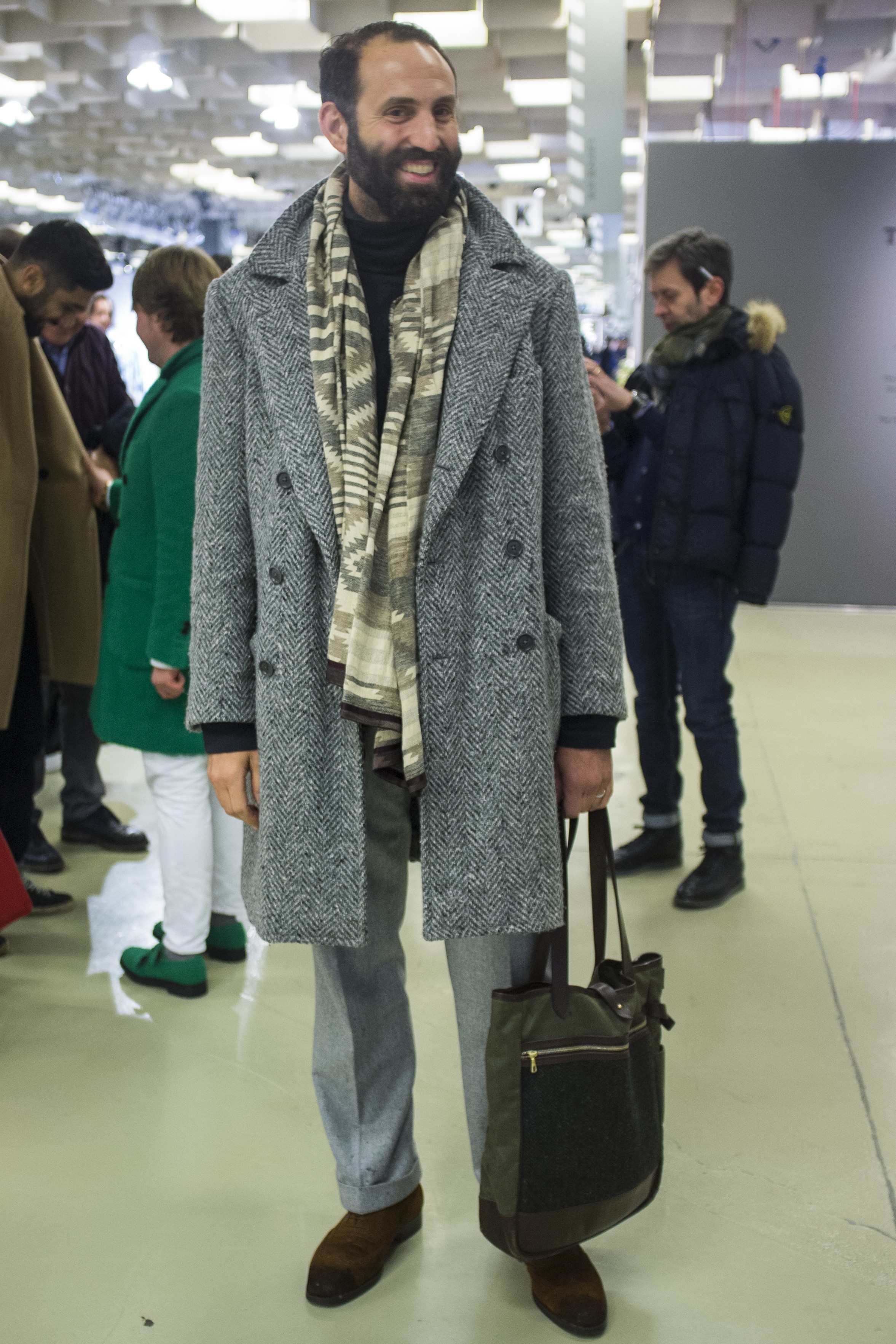 Why I like this? Kinda obvious I guess. Let me put it in just so many words. Greg (@gdl203 ) keeps it extremely simple, with an almost monochromatic colour scheme. What makes this great is rather the nice cut of all items worn, the fabrics, textures and the patterns of the coat and scarf, that creates a lot of visual interest. 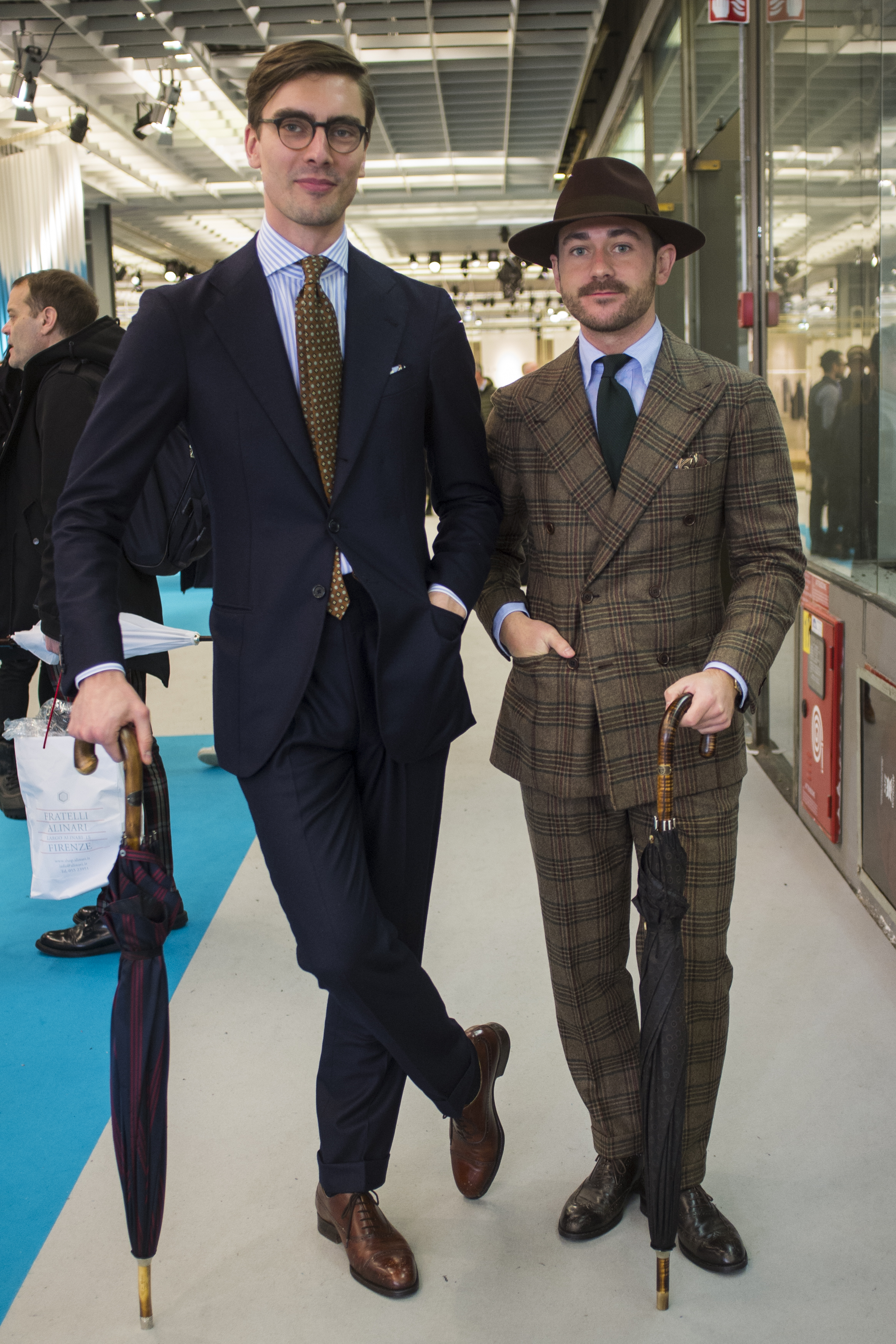 These guys are always a treat to spot. Niels is more subtle, usually in suits. Benedikt plays around with colours and patterns more. The really sweet thing about this is that they both do their particular interpretation of classic menswear really well. The fits are always impeccable, which they should be considering they usually wear bespoke (mainly from Corcos and Dalcuore), accessorized with details from their own brand, Shibumi. 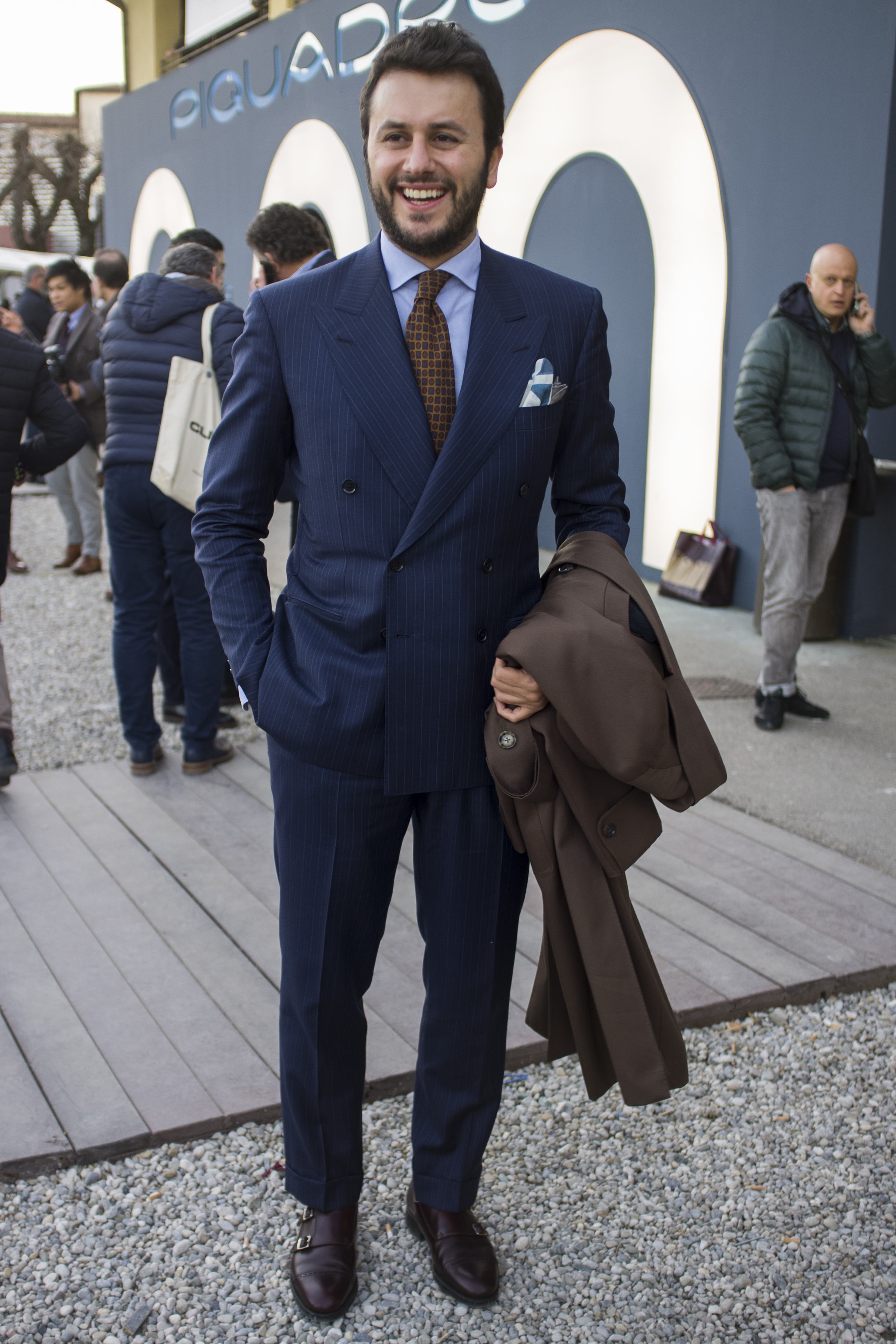 Fabio has great style in general. He can do both subtle and a slight bit of peacocking really well. I guess the thing that really stands out about his way of dressing is effortlessness. In many ways he sums up what I like about a really good personal style, he's a really nice and humble guy, he has a good eye for colour combinations, he's not afraid of doing something a bit extravagant, but he always does it in a tasteful way. This guy is the perfect photographee (not a real word?), since he´s always wearing a big smile. I think a good smile can cover up a lot of other flaws - not that Luparelli's outfits usually carry any flaws. What I particularly liked about this is that he does a 3-pattern matching on top, while making it look rather subdued. He also pulls off white trousers in an otherwise fall-coloured outfit really well. 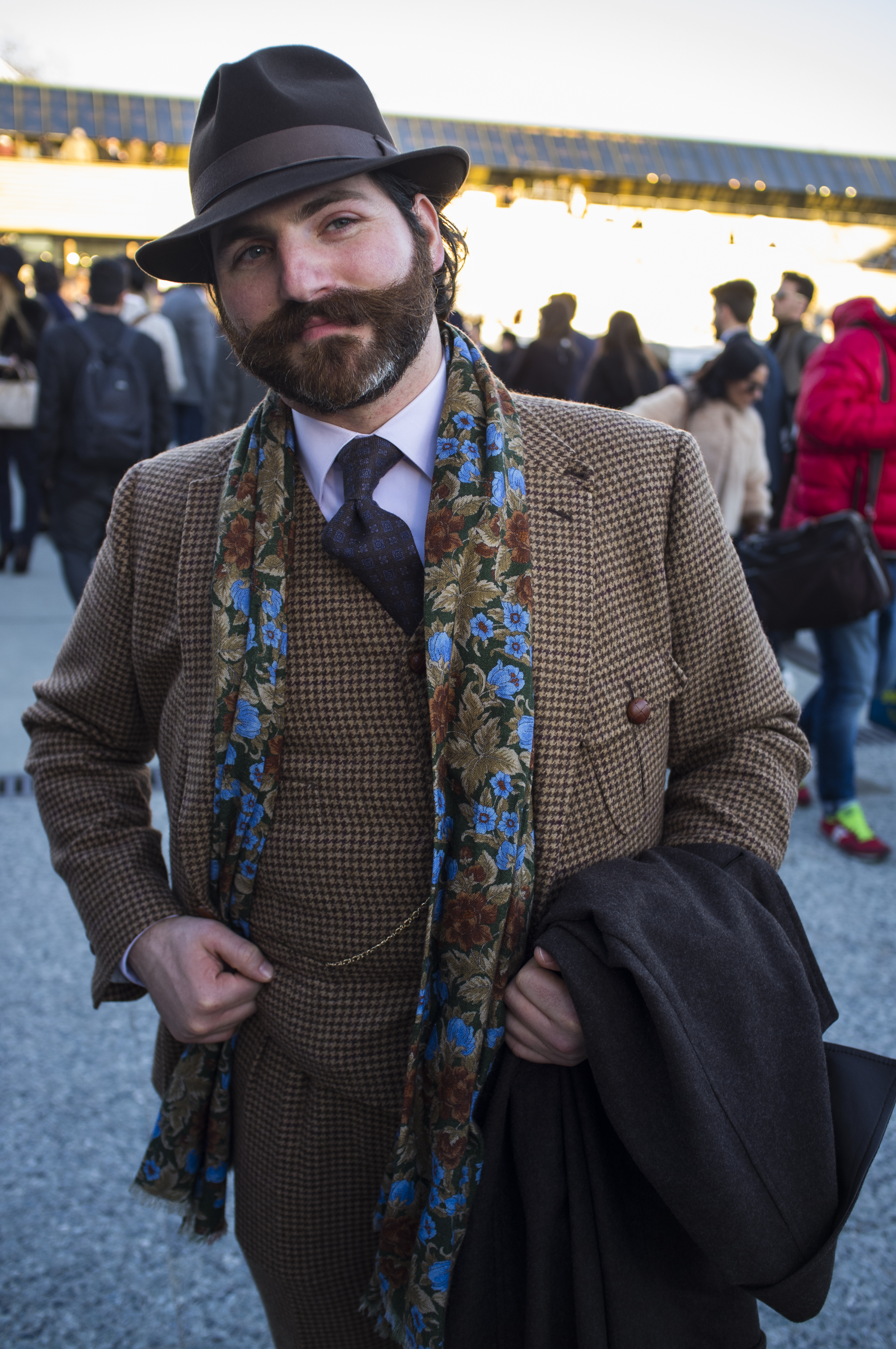 My dear friend Charley is a larger-than-life character. This really shows in his way of dressing. He once told me he never wears anything but 3-piece suits (well, sometimes an odd vest). May sound a bit eccentric. Well yeah, that's Charley. He does it really well though. If you know him, you also know that his manner of dressing isn't studied, it's just him. This was my favourite suit of his this week. It may look a bit bold up close, with the houndstooth pattern, but still, this is bordering on conservative business dress (conservative business dress) by Pitti standards. 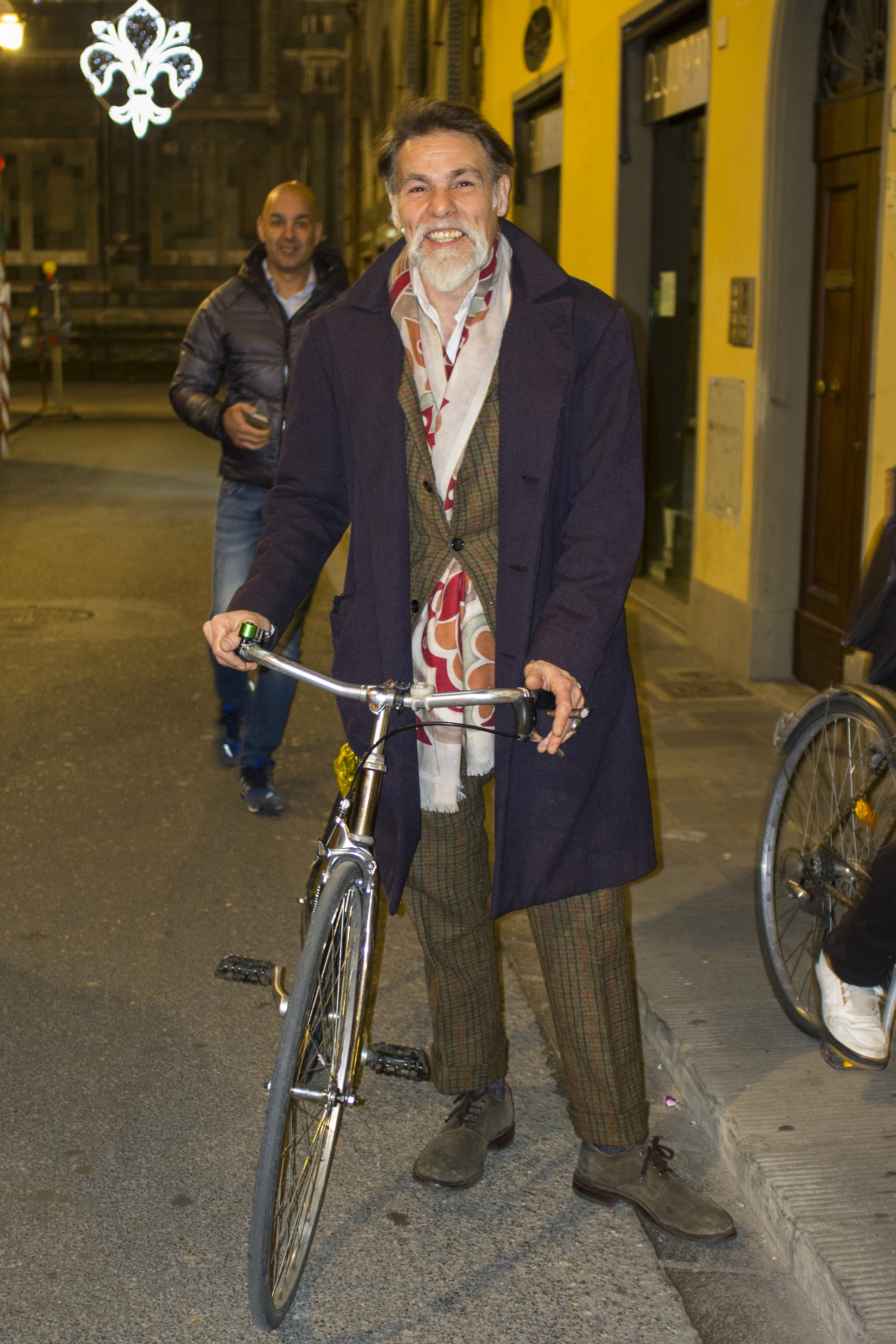 Mr Righi is the owner of the renowned Florentinian menswear store Frasi. He once set out to be an artist, though ended up in the menswear business. Well, lucky for us! He has really made an art of dressing classically with a lot of personality. Wearing great looking suits with big, often colourful scarfs, has become somewhat of a trademark look for him.

12. Robin Håkansson (to the left of Fabio) 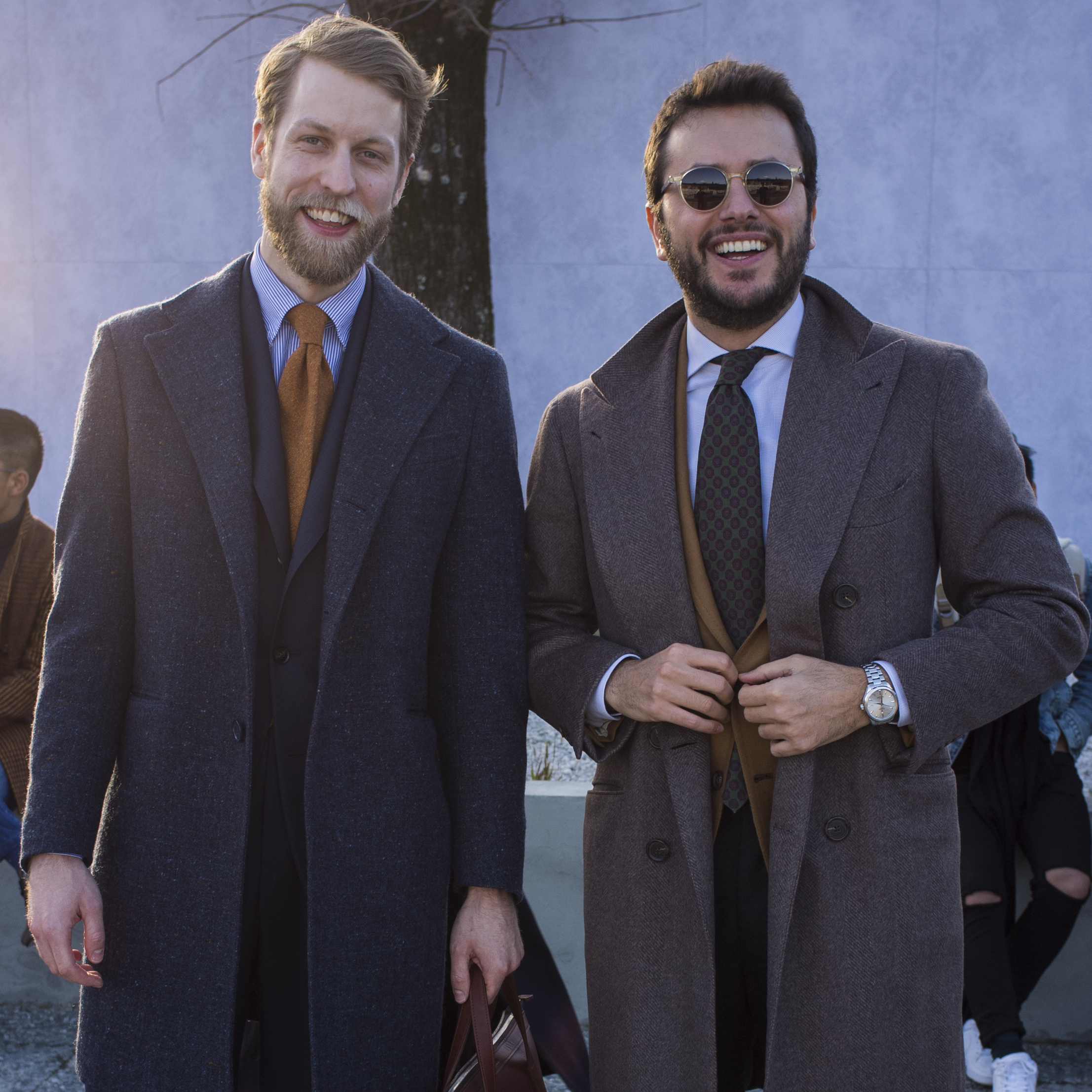 Robin is a Swedish blogger (and also a member of Styleforum, though I cant remember his SF handle). Lately he's been wearing a lot of Eidos. Personally, I love the Eidos cut, though it definitely looks better on certain people. Robin is the type of guy who really wears it well. In this particular outfit he has played down the colours, and just let the cut and fit of the garments speak. Good move!

13. The guy in the mustard corduroy suit (he's so familiar looking, still I can't remeber his name) Mustard corduroy suit. Doesn't sound that hot right? This guy single handedly disproved any negative ideas I've ever had about mustard corduroy suits. He wears exactly like you should wear a corduroy suit, sorta slouchy, with a good deal of je ne sais quoi. Well accessorised with two friends in subtle outfits. 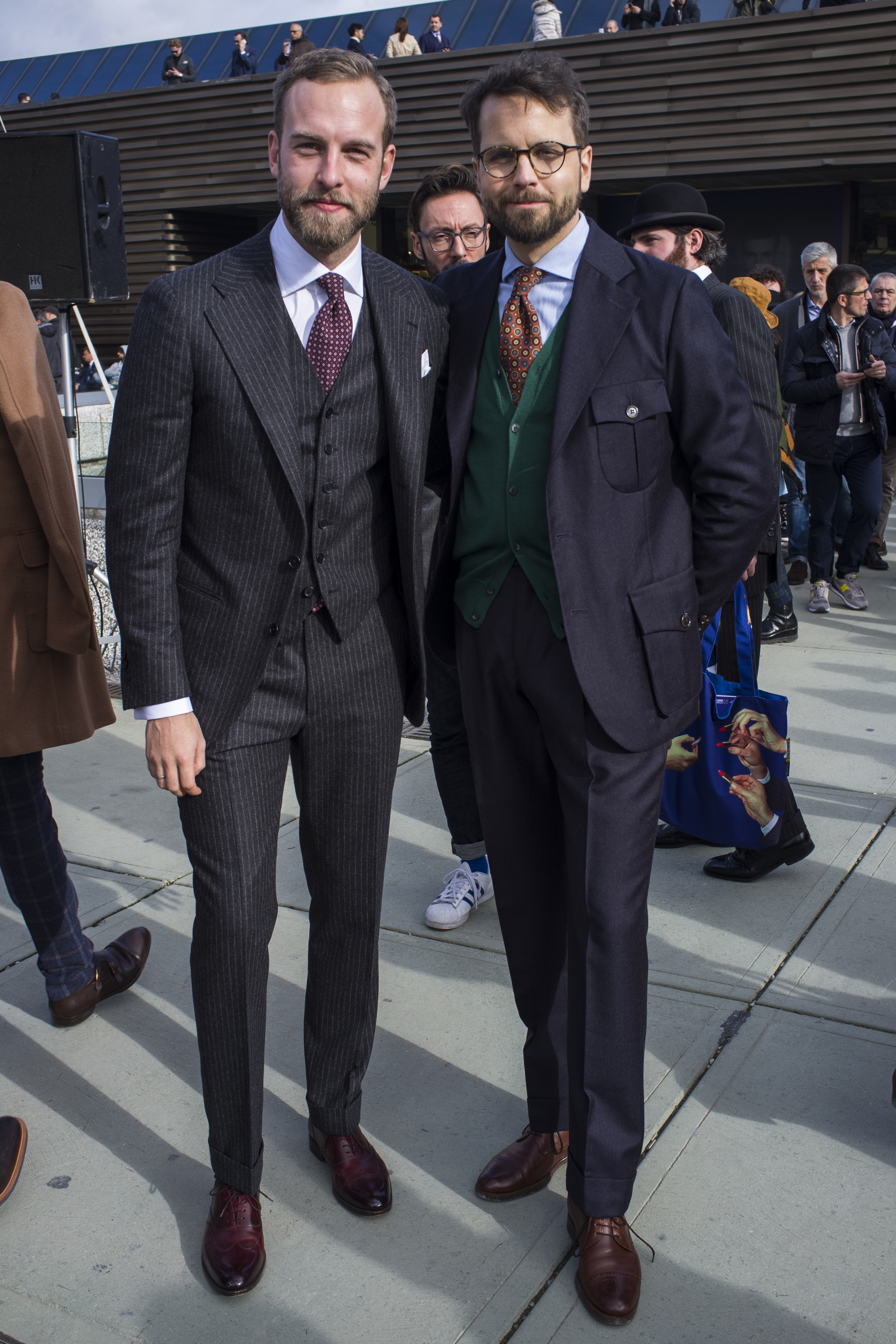 Andreas is the guy who runs Manolo, Sweden's biggest blog on Classic menswear. Other than that, he's also a really pleasant guy. This is a Three piece chalk striped Eidos suit that fit so well it put most of the bespoke stuff we saw at Pitti to shame.

On a sidenote: Wearing a shirt that rides up under your knitted vest, like I do, is a sure way of making it look like you've got a frickin' beer belly.

Mustard corduroy suit. Doesn't sound that hot right? This guy single handedly disproved any negative ideas I've ever had about mustard corduroy suits.
"Wearing a shirt that rides up under your knitted vest, like I do, is a sure way of making it look like you've got a frickin' beer belly."

I do that all the time. Just own it.
https://www.instagram.com/flannels_and_tweed/?hl=en
You must log in or register to reply here.
New posts