Beyond the Levi's-Zon: Denim Outerwear that isn't a Trucker Jacket 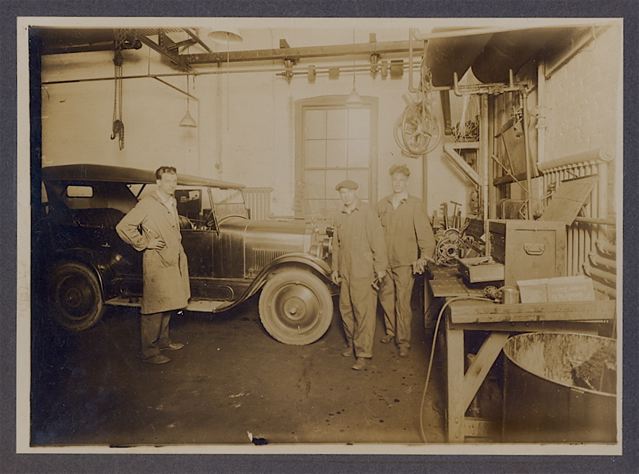 With hardcore denim fandom a worldwide phenomenon, what is there to know about denim that's not yet known? At this point, we all know that "denim" refers to "serge de nimes," a French term that roughly translates as "Marlon Brando's butt," famously coined by Claude Levi-Strauss, the inventor of jeans.

Haha, just kidding! There's no way denim was invented by the French. What's certain is that denim is a rough cotton fabric, the legitimate practical applications of which - ranch-work, motorcycle riding - caught cultural fire in the middle of the 20th century. Office drones like you and me wanted to capture a little bit of that badass spirit and did it by buying indigo twill pants with five pockets. And occasionally pairing them with a denim jacket, for a matched set that, I’ve been told, some Canadians consider to be formalwear.

But the most common denim jackets - Levi’s type I and III, Lee’s Rider jackets - represent just one piece of the denim outerwear puzzle. I’ve listed below some items with vintage roots, how to wear 'em, and where to find em. 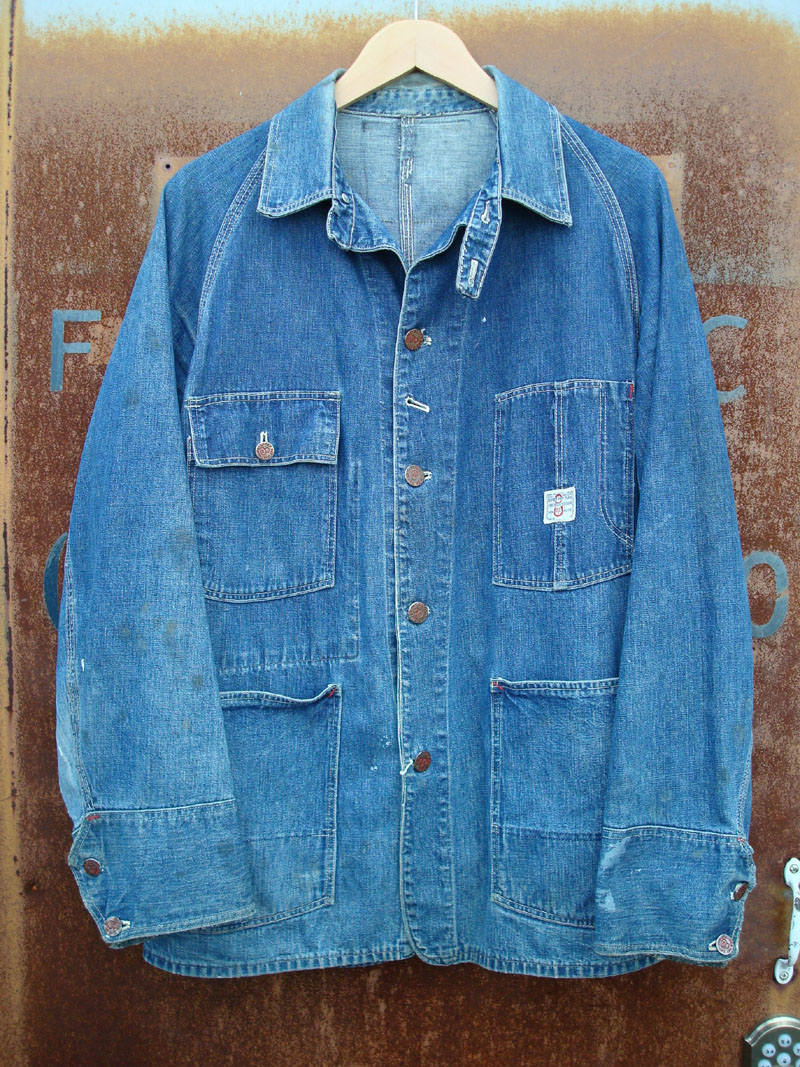 Chore coats/Engineer coats
Original denim “overalls” were just that; people wore them cut big to fit over their other clothes while doing dirty work. The denim would get worn and dirty and their clothes would stay fresh and clean (not counting, you know, sweat, industrial grade body odor, and anything that could bleed through denim). Chore coats are like jeans for your torso--long enough to cover your top half, often cut generously, with plenty of pockets. Designs evolved incrementally over the 20th century, with form truly following function, so certain details on vintage items denote certain eras--a buttonhole/pocket for a pocketwatch, for example, often means the jacket is pretty old, although some makers (like Big Mac) held onto those details until the 1970s.

Sources:
Vintage: Chore coats are common on the vintage market--second only to Levis Type III jackets. A nicely worn in vintage chore coat looks most at home with straight or wide leg indigo denim and work boots. They’re also great canvases for intricate repair work using sashiko or other stitches--an overpatched jacket in various shades of indigo may have been indicated a thrifty blue collar worker at some point, but today that guy probably just reads Styleforum.
Post Overalls: Post Overalls are masters of the tweaked version of vintage workwear, and often make one of their work-influenced jackets in denim. Check out Takeshi Ohfuchi’s amazing blog--he posts his original designs from the past two decades, as well as inspirational vintage pieces, accompanied by bone-deep knowledge of every detail. 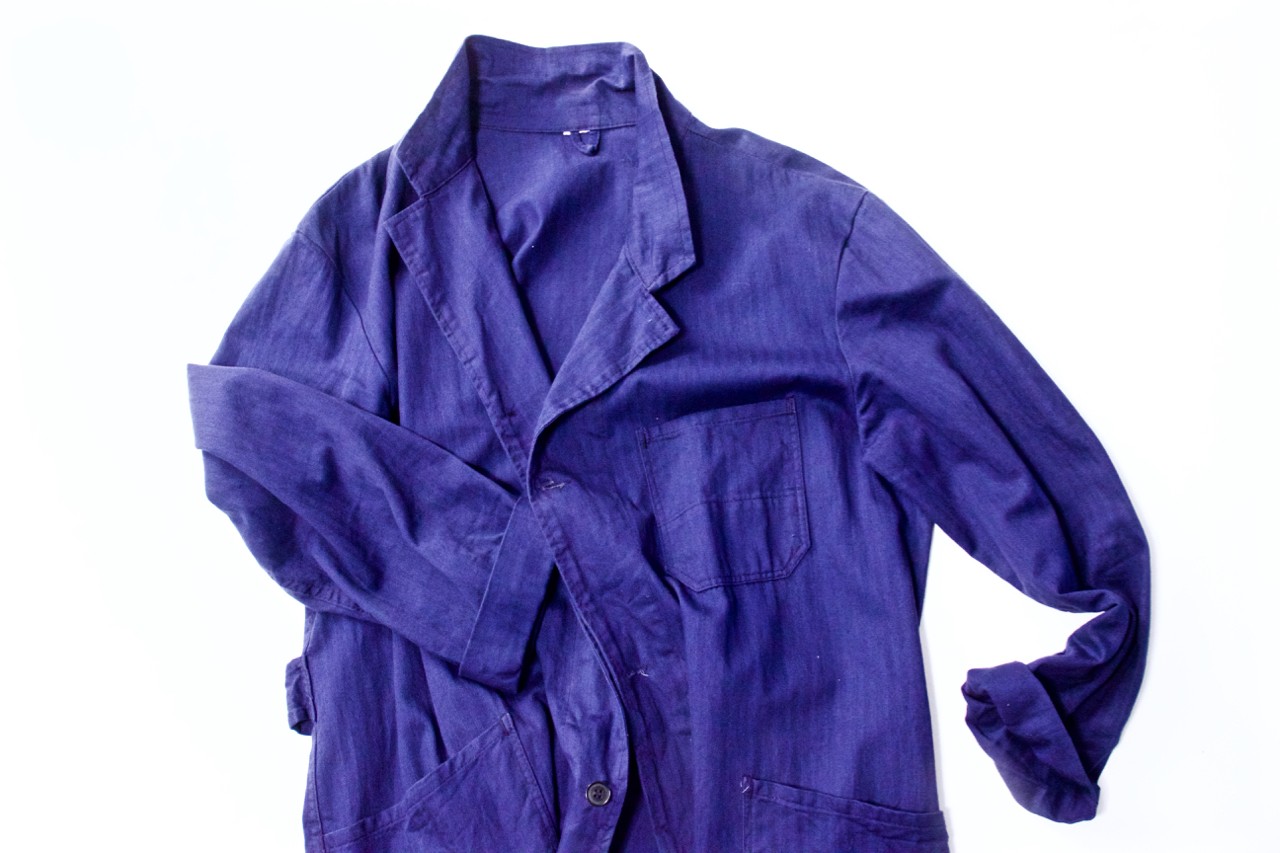 Shop coats
While the roots of chore coats are in outdoor work, the longer shop coat is for the indoor kids: guys who worked on cars, shoes, carriages, or in other workshops. The shop coat doesn’t assume you’re wearing jeans, too, and protects more of your clothes than a chore coat, and they’re usually twill, chambray, or denim; not white like, say, a lab coat. They share details with the chore coat though--work-style metal buttons, seams often triple stitched, simple patch pockets--but also have belts and often a lapel instead of a shirt collar. Auto shop-specific versions sometimes included covered button plackets so, when leaning across the hood of a fine automobile, you wouldn’t scratch the finish. The robe-like length of the shop coat, combined with its light-ish weight, make it a practical transitional season jacket, but have maybe held it back from having the universal appeal of something like the Lee Riders jacket. 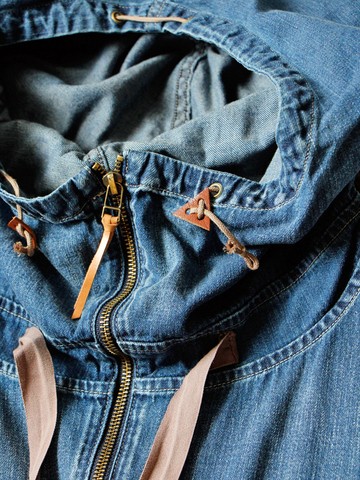 Parkas
Denim jackets outside of work settings were unusual before the 1970s or so; according to Post Overalls’ Takeshi Ohfuchi, the qualities of denim we value so much were considered less positively: “Denim was not suitable for many things due to its unfavorable character back then – bleeding and fading.” But you do occasionally see denim applications in outdoor wear, both modern and vintage. Maybe it’s to spite outdoors enthusiasts who like to criticize people for hiking in denim, just because it’s heavy when wet, takes forever to dry, isn’t a particularly good insulator, etc., etc.

Sources:
Vintage: Denim is more useful as a midlayer (jacket, vest) than true outerwear in most outdoor sports applications, so don’t look for down jackets in denim. Jonathan of the Bandanna Almanac swears a friend has a vintage Montgomery Ward denim parka.
Kapital: The brand that specializes in the indigo-ification of everything has created a denim parka for this fall.
Supreme: Last year the cult skate label made a North Face jacket with Gore Tex and denim. Take that, part time REI store associates.

Wearing a used denim jacket (especially a repaired, patched piece) both embraces and winks at concepts of authenticity--it’s the real thing, alright. But you, it says, are probably not. And that’s OK! Wearing vintage, or even gear like Kapital’s or Visvim’s, acknowledges the functional DNA of workwear, the borderline folk art of denim repair, and the hard living of previous generations, while borrowing a little of their hard-won good looks. Bonus: on an authentically oil-stained shop coat, what’s a little dribble of wing sauce?

"And occasionally pairing them with a denim jacket, for a matched set that, I’ve been told, some Canadians consider to be formalwear." I am sure that comment was made by an American, not a Canadian.I've seen more suits and tuxedos in Canada than in the US.

(Note: I'm Canadian)
Canadia Canada has had easy access to American media for well over a century. America, on the other hand, has has little access to Canadian media. Given that fact, it shouldn't be a surprise that one is more knowledgable about the other.
CBC (Canadian Broadcasting Corporation) has been around since 1936 and could be heard from sea to sea - from the beginning. There is no reason to blame the lack of media exposure. And newspapers have been around longer than the country.

This has nothing to do with the media - it is a mindset. It is about broadening ones knowledge base, learning about the world beyond our borders, thinking about others, etc.

Canadian media has always been accessible to those who wanted to listen. I remember listening to the Canadian national anthem when a Montreal radio station went on the air first thing in the morning at 5:30 am - and I lived near Philadelphia. And there were many other stations that I could listen to if I so chose. While it is true that our technology has come a LONG way since then and we do have easier cross-border access than even 20 years ago, this is about how we use our brain, not technology, to learn about the rest of the world.

No man is an island. Stereo-typing people is detrimental to all relationships. We all lose.
When we are discussing fashion. or anything else, using comments like the one above, the credibility of the speaker is lost - by insulting Canadians, the speaker is 'losing' many who would enjoy the rest of his article. He may have though he was using tongue-in-cheek with that comment, but it backfired.

Please stop insulting the intelligence of others, no matter who they are or where they live. Negative comments serve no positive purpose.
This is about being better human beings - using our brains for the good of all.
I beg to differ with the one who states don't blame the media. As you know, US people are very much media followers and I too believe there is some truth to that notion. I will give you an example: Japan. We are thousands of miles away, yet it is implied they are advanced in their fashion forward style, why? Media. There isn't much coming out from Canada. Ignorance is no excuse, of course, there are many people in the spotlight but the most exposure Canada has had in recent times is through HGTV shows. Imagine that!
It doesn't matter what media is coming out of Canada, Japan, the US, or any other country. This is about making statements based on a lack of knowledge. Some people are more outgoing and self promoting. This is a trait often noticed in Americans. Most Canadians are more humble and laid back and tend to not promote their talents. These a merely observations.

Japan does indeed have a unique style - clean uncluttered lines which perfectly suit them. Every designer has to find their niche and they have found theirs. There are also many fabulous designers who were born and educated in Canada and have made their mark around the world. Because they are self-effacing, most people have no idea that they have Canadian roots. Many people assume ( again, that dangerous word ), many assume that if someone is working in the US then they must be American. This is sad. In my humble opinion, Canadians need to promote themselves, they need to speak up more.

But more importantly, everyone needs to stop making useless comments that put others down, whether it is an individual, a country or a race. Negativity is the beginning of a downward slide.

Some people need to build themselves up by putting others down, and that is a form of bullying. Is this what we need to be doing on this forum? NO.

So...Let's just stop with the unkind, inaccurate comments about others. PERIOD.
Hear, Hear! And while we're at it let's put an end to those despicable Newfie jokes.
I know a Newfie who is one of the smartest men around - he hides his light under a bushel basket. He is quiet and unassuming, but when he speaks, everyone listens...he pointed out that most jokes are not really funny because they are made at someone else's expensive - making someone else feel very uncomfortable. When you think about it, laughter is a nervous reaction, people often laugh when they are trying to hide their discomfort.

So just stop with the uncool jokes. Share the good stuff!
Alright! Get over yourselves....
So how about that denim outerwear?
Why do Canadians hate jokes?
Put This On
A blog & web series about dressing like a grownup.

Bullseye with Jesse Thorn
"The kind of radio show people listen to in a more perfect world." - McSweeney's
Maybe Canadians just don't get the 'funny'. It's interesting that a good number of the bold faced names of comedy hail from Canada but that almost all of them now live in the US. Hhmmmm
You must log in or register to reply here.
New posts