A Brief History of Indigo 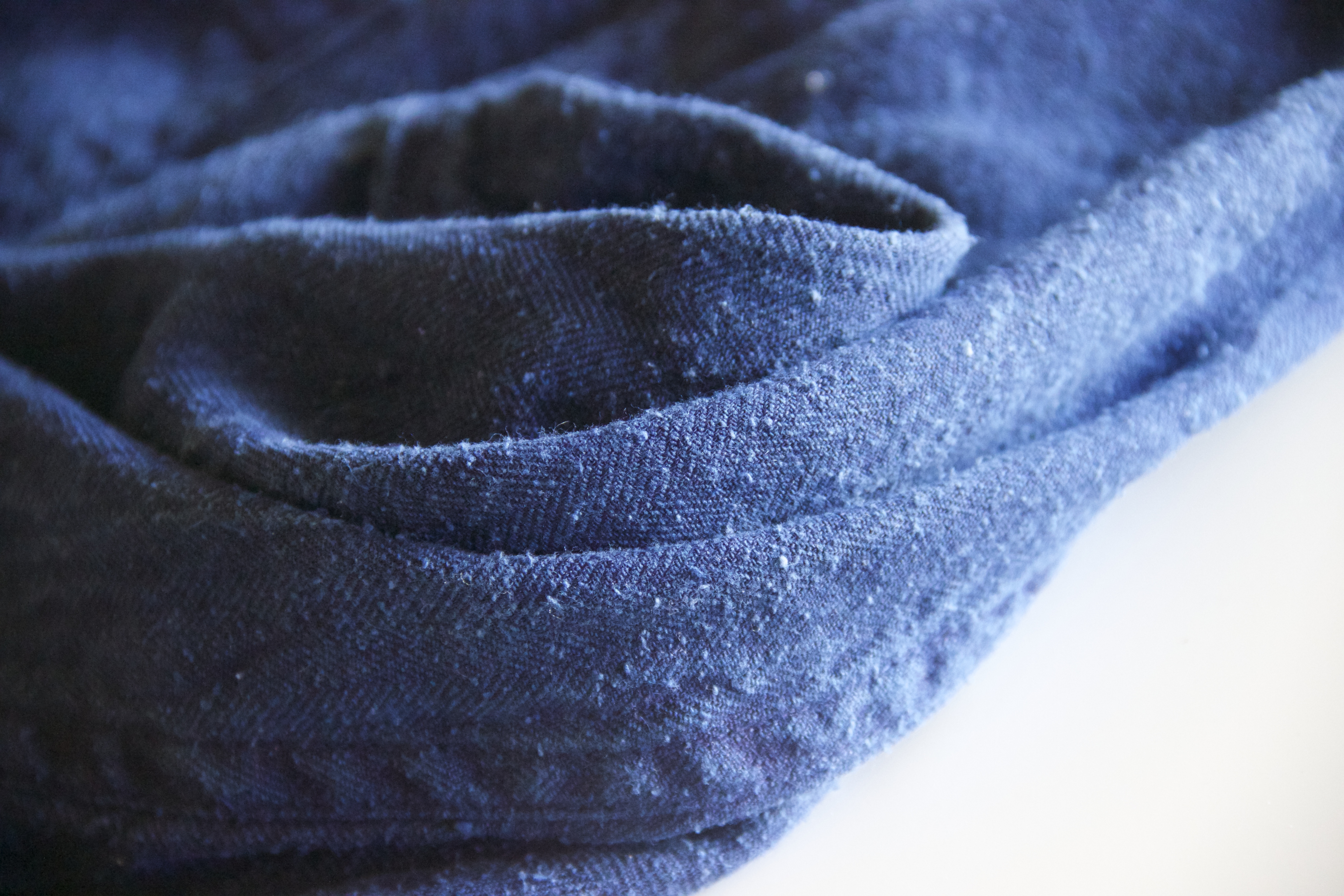 Long before indigo was co-opted by men with beards fuller than the cut of their jeans, and long before Okayama became the denim capital of the world, indigo was “blue gold,” the dye of the Pharaohs and of royalty worldwide. But I did say this would be brief - so buckle up.

Indigo dyeing seems to have been stumbled upon separately by many different cultures - including the ancient Egyptians, who used indigo to dye the robes and embalming fabrics of the Pharaohs; the Chinese, who used it primarily as a clothing dye; and civilizations across Africa and the Middle East. The rarity of the color, and the work involved in producing the dye, ensured that indigo-colored products were largely reserved for the elite - although in some locations with high-volume production, such as China, indigo-dyed clothes became the de-facto work uniform.

The indigo we think of comes largely from the genus of plants referred to as Indigofera, of which Indigofera tinctoria is the most common. In Japan and China, Polygonum tinctorium was (and largely is) the plant of choice, and other genera or species were used across Asia, Africa, Europe, the Middle East, and even North America. Europeans had their own source of indigo: woad (Isatis tinctoria). Regardless, the blue color that all of these plants produce is nearly identical. Unsurprisingly, India has historically been a major center of indigo commerce - “indigo” has its etymological roots in indikón/indikós (ινδικόν), meaning “Indian,” or “Indian (dye)” in Greek. And although the original native source of indigo is constantly argued, India was the route via which the Greeks, and subsequently the Romans, likely discovered the product.

Regardless of the source, the dye - and the color it produced - was treated with global reverence. In Ancient Egypt and Medieval Europe colors were often linked to powers both perceived and symbolic, and indigo has long been thought of in various forms of traditional medicine as having purifying, even anti-bacterial properties. The early (and continued) allure of indigo was certainly due in part to its brilliant color - reminiscent of both sea and sky - but it must also be based on the almost magical oxidizing process by which the dye is activated. Holding a skein of wool into the air and watching as its color transformed from yellow-green to deep blue must have been wondrous indeed.

Adding to the rarity was the sheer amount of work that producing the dye entailed. Plants had to be grown, harvested, and then treated or fermented in order to produce dye, and things were apt to go wrong at any point. Make no mistake, indigo has always been a global cash crop, and much of the magic is killed off by historical accounts of work at indigo factories, and the fact that in the 18th century, American indigo producers relied heavily on African slave labor. Like any precious spice, indigo spread its roots, both physical and metaphorical, across the world.

Styleforum’s readers likely think of indigo’s use as being focused on clothing production, but a great number of existing examples of historical indigo application come in the form of tapestries and weavings. Despite indigo’s proclivity to fade from cotton threads (which we now find desirable, of course), the dye is relatively colorfast (and time-fast), and its adherence to woolen yarn made it an ideal choice for weavers.

But it was its usability on cotton that cemented its popularity in Japan. For those who could not afford to wear or were forbidden from wearing silk (during, for example, the Edo period; 1603-1868), cotton proved an excellent fabric for lightweight garments, and in particular, summer kimono were often made of indigo (aizome)-dyed cotton. Katazome and shibori, techniques for resistance-dyeing, allowed craftsman to produce incredibly delicate and detailed designs. Similar techniques, such as adire in Nigeria, were found worldwide.

Indigo enjoyed centuries of undisputed dominance as both an economic powerhouse and, more simply, an alluring product. Then, in 1897, German scientist Adolf von Baeyer brought synthesized indigo to the market, and by the early 1900’s natural indigo was on its way out. Manufacturing processes were streamlined, and much of the guesswork involved in indigo production was immediately removed. The sudden availability of the color led to its use in the dyeing of standard workwear - in France, as any devotee of vintage chore coats knows; as well as the USA, where a certain Mr. Levi Strauss helped to start a company that had a rather lasting effect on the global clothing market. Yes, that did indeed give rise to the term “blue collar.” 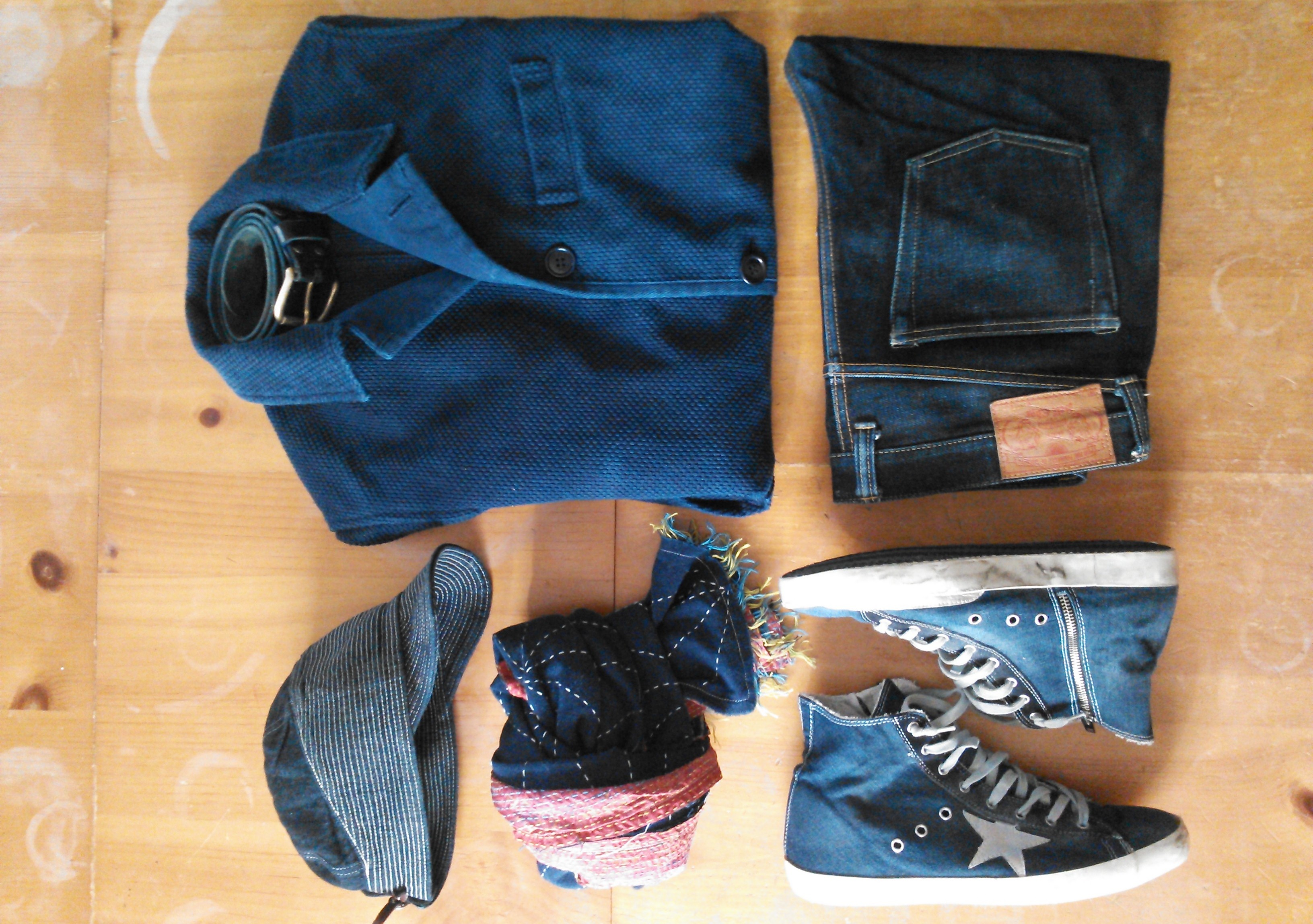 Fok, Styleforum's administrator, has a particular obsession with indigo

But indigo’s man-made replacement faced strong competition from other synthetic dyes, and Jenny Balfour-Paul tells us in her book “Indigo” that “Synthetic indigo was going the way of its plant predecessor when it was saved by the astonishing blue jeans revolution which followed the second world war…a century after it was first launched on the commercial market, synthetic indigo is in constant demand, mainly to dye…more than a billion pairs of jeans.” In Japan, this birthed an entire - and beloved - industry.

Now, after millennia of use, almost all of the indigo used and produced worldwide is synthetic. Strangely, when it was first introduced, Balfour points out that the peculiarities of the natural stuff - impurities in the color, even its odor - were initially preferred by dyers resistant to the march of progress. And after a century of monopolization by its lab-born rival, natural indigo dyes are making a small comeback - though certainly a niche one - led largely by small-scale denim manufacturers looking for a return to natural roots, and home-crafters enamored with the image of wizened, blue-stained dyers dipping things in overflowing vats of bubbling indigo. The very peculiarities that 19th-century dyers first held dear are the same characteristics that modern consumers interested in natural indigo have come to cherish. History repeats itself, and indigo seems destined to never fade in importance or allure.

Follow the Styleforum tumblr
Like our Styleforum facebook page
Follow the Styleforum twitter feed
Follow our Instagram
Visit
​
Thank you, indigo is my favorite color. I just bought a fitted denim ball cap from Hickorees
This was interesting. Is there any sort of collection of the natural variations in shade of natural indigo?
Twitter
Hi @patrickBOOTH , although I'm not sure about an existing collection of images, I can recommend the book cited in this article as a good place to start (along with bookstores, of course): "Indigo," by Jenny Balfou-Paul. There are some great pictures inside, for one thing.
You must log in or register to reply here.
New posts